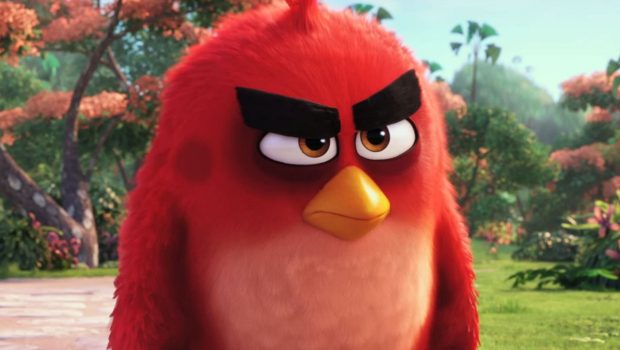 Reviewed by Damien Straker on the 8th of May 2016
Sony presents a film by Fergal Reilly and Clay Kaytis
Produced by John Cohen and Catherine Winder
Written by Jon Vitti, based on ‘Angry Birds’ by Rovio Entertainment
Starring: (the voices of) Jason Sudeikis, Josh Gad, Danny McBride, Maya Rudolph and Peter Dinklage
Music by Heitor Pereira
Edited by Kent Beyda and Ally Garrett
Rating: PG
Running Time: 95 minutes
Release Date: the 12th of May 2016

The Angry Birds Movie is both the equivalent of a screaming five-year-old and a regressive piece of American propaganda. Out of all the films I’ve seen this year, this is the one I least expected to have an anti-immigration and an eye for an eye message underneath it. But it’s actually happened. Angry Birds is now a metaphor for the September 11 terrorist attacks. The film was developed by Sony Pictures based on the phenomenal mobile phone game series courtesy of Finnish company Rovio Entertainment. Last year, 30 million copies of the game’s sequel, “Angry Birds 2”, were downloaded. Having been developed into books, multiple games, theme parks toys and other forms, it was inevitable that Hollywood, divorced from making films for adults, would turn the franchise of aiming birds at pigs into an animated film for children and their poor parents. They’re in for a rude shock. Aside from the pitiful, threadbare story and the ADD direction by first-time directors Clay Kaytis and Fergal Reilly, the film is also politically dubious and set on a message that isn’t appropriate for children or clear-minded adults.

Prior to the film, I had never seen or played the phone game. Many of the small children at the screening would probably be in the same boat but as the owners of mobile phones are getting younger these days, you can’t be entirely sure. Regardless of whether they’ve played the game or not, the film’s world-building is lazy. The only context or information given to this bizarre universe is that anthropomorphic birds live on their own island community and haven’t travelled outside of it. This is all the information we’re given about the island before one of the film’s many slapstick sequences starts and introduces us to Red (voiced by Jason Sudeikis). He is indeed an angry bird who is so bitter to other people that after a confrontation he’s sent to an anger management class. Does it need to be said about how this will be lost on small children? The class is run by Matilda (Maya Rudolph) and in attendance are Terence (Sean Penn), a bird who rarely speaks; Chuck (Josh Gad), who lies about his crimes; and Bomb (Danny McBride), who literally explodes when he’s angry. Other than from keeping the sketches of Chuck and Bomb by Red’s side, the plot point itself is thrown out the window once the island is sprung upon by a ship containing green pigs. They claim to be friendly, despite accidentally destroying Red’s house. He continues to be suspicious of their plans even as the rest of the community is entertained by their music stage show. 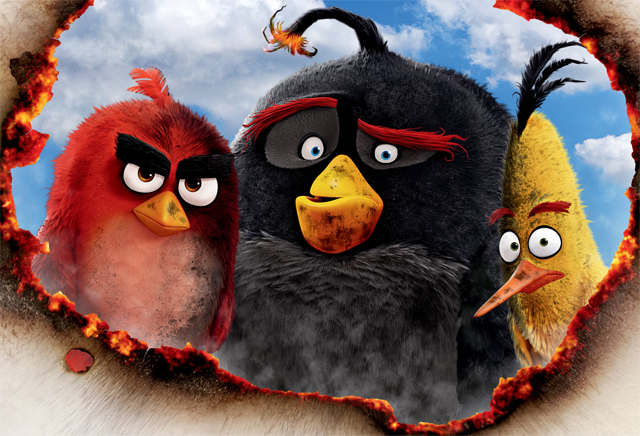 What happens next in the film can’t be spoiled. It’s not that there’s a riveting twist. Aside from a useless visit to Mighty Eagle (Peter Dinklage), the last thirty minutes of the film is literally smashing, crashing and banging. A bombastic final quarter isn’t unusual for mainstream films. What is strange is that someone had the bright idea of coating every other scene with the same sludge as this headache-inducing film style. The film is so loud, overly busy, hyperactive and overzealous—determined to keep children awake—that no beat or scene is free of being suffocated under the film’s own attention-seeking needs. It doesn’t have a story. It’s a barrage of lines being shouted, monotonous slapstick gags that were once sketched onto storyboards somewhere and painfully obvious pop songs (Limp Biscuit’s cover of “Behind Blue Eyes” and Imagine Dragons’ “On Top of the World” are both used) to telegraph emotions. Having the film padded out to ninety-minutes, thirty minutes of which is birds being catapulted into pig city (I counted), one considers such ruminations as to what a nail gun to the face might feel like instead. Not to mention that the mildly amusing trip to Mighty Eagle where he makes Red and company sing, is a rip-off of one of Megamind’s best jokes. I also think that having a lazy, giant eagle that was once legendary but now fallen is meant to represent America’s flagging world status, which invites a whole set of new problems. 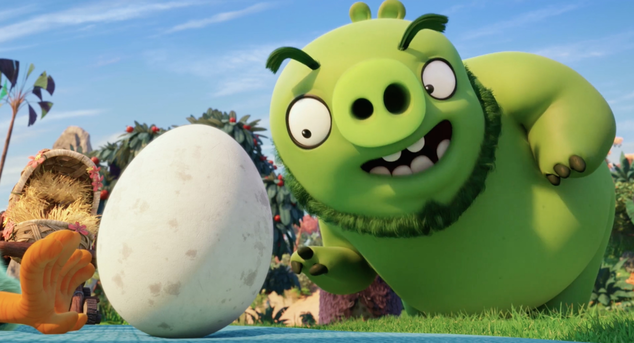 A mediocre animated film is tolerable but subtly injecting reprehensible propaganda beneath all the deliberate noise marks a new low for Sony Pictures. The first warning sign is when Red discovers that pig leaders are secretly holding dozens of their friends at the bottom of their ship as though they are people smugglers and refugees. Likewise, these pigs decide that they will blow up the city with dynamite and then steal their unhatched eggs, the children of the birds. What better way to resolve this problem than by tracking down the pigs, the leader of which has an Arab-style beard, and then blowing up their city? This is capped off with a creepy, eye-opening song where some bird-children sing about Red saving their homes and liberty. Essentially, the film is a metaphor for America being a walled-off island of sunshine, the happiness of which is threatened by outsiders until they have the daylights bombed out of them and order is restored. It is skin crawling that beneath a film as stupid and superficial as this that it could have such a toxic message. What starts as a story about tempering your anger devolves into a revenge mission aimed at children too young to remember the careless outcomes of 9/11. To me, there is something deeply disturbing about using a children’s film to mislead them in this way and someone should answer for it.

Summary: The Angry Birds Movie is both the equivalent of a screaming five-year-old and a regressive piece of American propaganda.