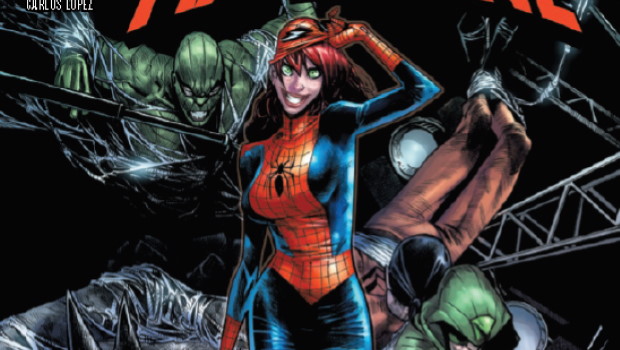 Summary: Mary Jane is finally realizing her big dream... but before the film can be finished she's going to have an unwanted on set visit by some familiar faces.

Mary Jane is getting to live out her dreams… a movie with her as the star… but before she, Mysterio and crew can get the climactic battle scene filmed, some familiar faces will attempt to make their own scene. But you can bet your bottom dollar that Mary Jane will do all she can to make sure that nothing ruins her dream.

I need to say off the bat here that there is nothing wrong with the writing here… the issues I have are I think my own in terms of what I was hoping to find in this issue. I hadn’t read the previous issues so I was playing a bit of catch up and that may contribute to the lack of attachment I felt to the story. I just didn’t particularly feel invested in anyone. Having said that, there were still some lovely moments that stood out, my favourite is Mary Jane’s message to Peter… it’s such a relatable mix of thrill at what she is doing and regret that it couldn’t be even better by having her partner there to share the joy.

The artwork is quite good here. There are plenty of scenes in which a lot is going on… but it never becomes hard to see where the action is or what’s happening. I think that comes down to a great use of bold lines and a good mix of colours to create contrasts that are easy on the eye.