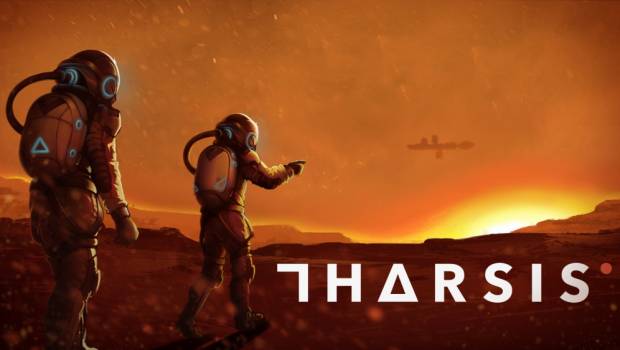 Summary: Tharsis is a hard-as-nails solo tabletop disaster in space.

Tharsis is a strategic nightmare where the survival of your crew, and the completion of your very important mission, relies heavily on luck and a dash of hope. For some people, Tharsis is going to scratch a very particular itch, and for others, well they’re probably going to have a bad time. 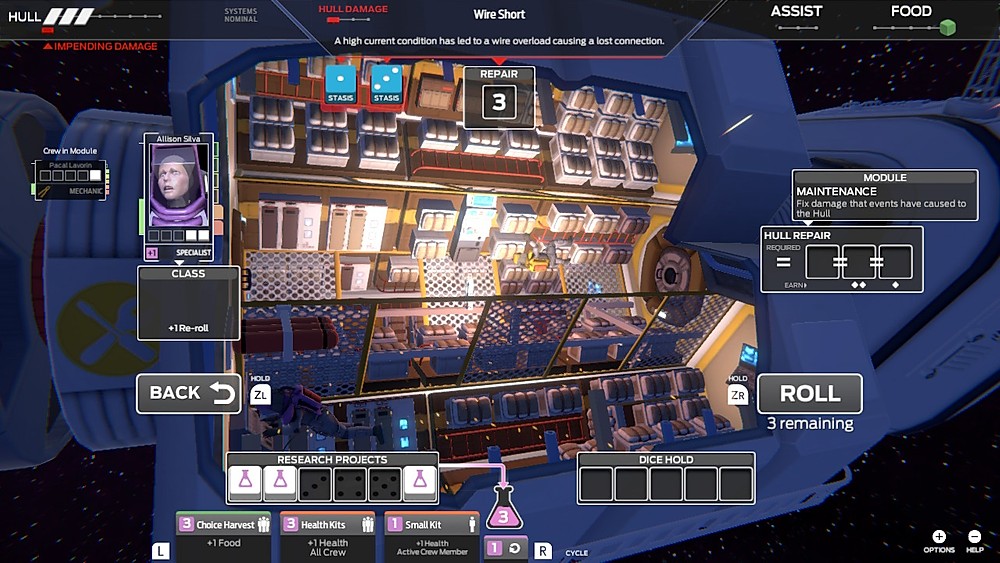 Investigating a signal in the Tharsis region of Mars, a meteor shower batters your ship plunging it into disarray. You lose two of your crew members instantly, and it’s up to the final four to keep the systems on life-support so you don’t fall victim to the endless cold of space. Thus begins the the never-ending plate spinning nature of Tharsis’ strategic hell.

There are a series of rooms on the ship, each with a different function that can help you succeed in your mission as you hurtle through the endless void. The medical bay will help restore health to your crew, the greenhouse will help grow food to keep them fed, your maintenance bay will unleash more duct tape than a Bunnings Warehouse to keep your ship together. Using these rooms effectively is key to survival, with each room requiring a crew member to function on a single turn, you need to decide which plate is about to fall first, and then disperse your crew accordingly to your predictions. 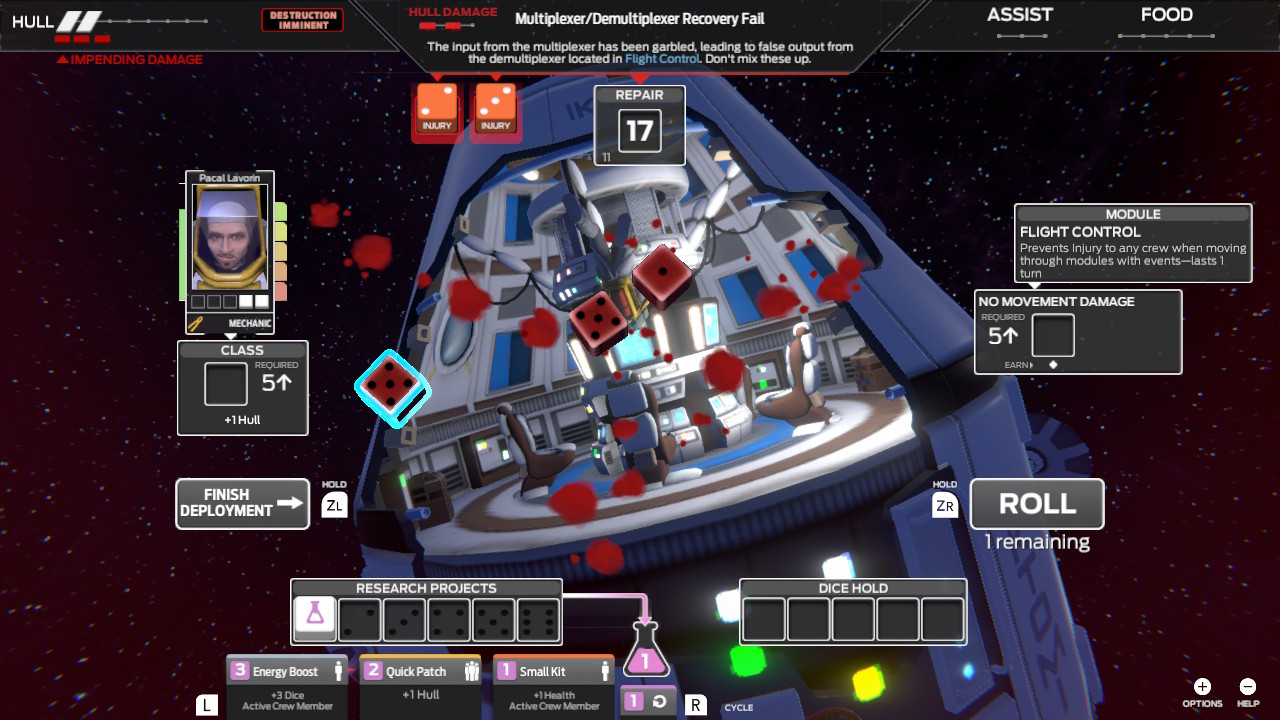 Then you just need to roll the dice. No… literally. Everything in Tharsis is decided via dice rolls, which more often than not, bring your well thought-out plans to a crashing and devastating halt. Each room in the ship requires specific results to be effective, which is often much harder than it looks. Thankfully, some of the rooms and abilities will grant extra die that can be used to boost your chances, which adds yet another resource that you need to be wary of.

Your crew members also have some nice perks that will make things slighter easier, or harder, depending on the situation that unfolds before you. Some will be able to roll extra dice for bonus actions, some can repair the hull, and each run these crew members are randomized to keep things interesting. Each crew members also has their own health and sanity meters, which are perhaps the most important stat to be checking. If you lose your crew members, you definitely won’t make it out the other side. 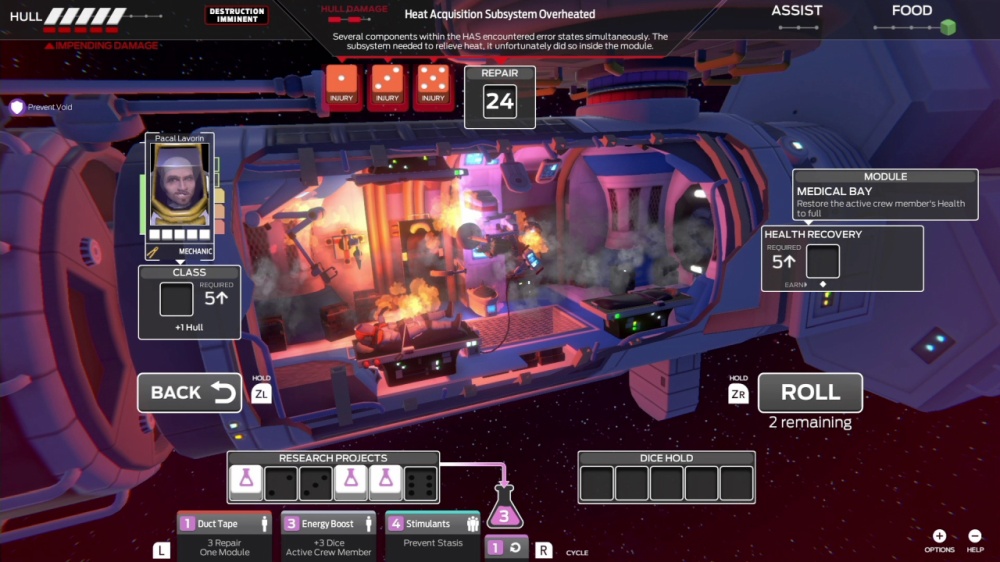 Each turn, the game is throwing new and interesting problems your way, usually due to more meteor strikes as you slip through the stars. Having to make the call of when to push your crew to the limit, let go of a failing system, or when to repair your hull is an important one to make. More often than not, you will probably make the wrong choice, but that’s the fun of Tharsis.

Unfortunately, that fun for some is going to be a burden for others. Tharsis could easily be a tabletop game, with people sitting around a table arguing about the correct strategy, throwing insane ideas out, and pushing their luck for “the good of the story”. Unfortunately, this doesn’t work so well as a single-player video game. The game is brutal, even on the easiest difficulty, and rather than having a fun story to tell of “that one run when Chloe dropped the plates of food because of a bad roll”, it’s just you sitting on your couch, crying that you failed after another “unfair” barrage on your ship.

I love tabletop games, and I’m not shy of a challenge, so personally I really enjoyed Tharsis. But that’s for me, and I’m not writing this review for me, I’m writing it for you. Do I think you would enjoy Tharsis on a rainy day while the world is self-isolating? Maybe? It’s definitely a niche game, one that I’d hate to recommend to everyone for fear of broken joy-cons due to frustration and contempt.

But if that sounds like an interesting concept, if you like the idea of constantly failing over and over again to eventually get that one lucky run that lets you see what the signal you were chasing was all about, then I’d say it’s worth taking a peek.

Tharsis is an immensely difficult solo tabletop game set in space that will have you spinning more plates than any other game you’re likely to play this year.