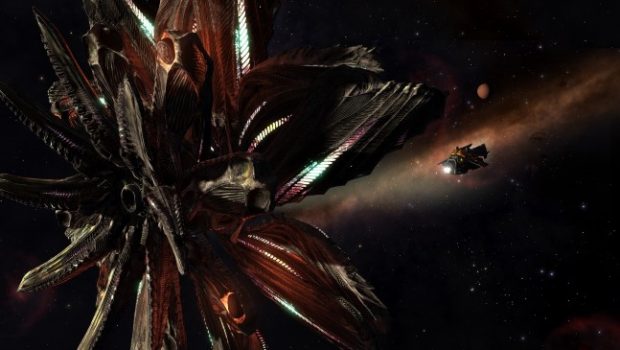 Since 2014 Elite Dangerous players have scoured the vast simulated Milky Way galaxy as tensions between the Empire, Federation and Alliance have risen. With each new discovery of artefacts, probes and relics of unknown origin, players drew one step closer to the return of a long-lost enemy.

In 2017, the Thargoids will return in an ongoing Elite Dangerous story arc enabled by Elite Dangerous 2.4 – The Return, bringing new threats to the galaxy and advancing the community-driven narrative.

For gamers of the eighties and nineties, Thargoid history dates back to 1984, when David Braben and Ian Bell created gaming’s original open-world space adventure: Elite. The Thargoids’ eight-sided craft became an iconic threat, challenging even the galaxy’s most Elite Commanders.

The Thargoid story is a long one, unfolding during the events of Frontier: Elite II and Frontier: First Encounters, as well as in Elite’s published fiction. Events in Elite Dangerous take place over fifty years since those in Frontier: First Encounters, and today the facts about the Thargoids have been swamped by stories, myths and legends. It has been unclear what is true and what is an elaborate conspiracy theory… Until now.

Elite Dangerous: Horizons 2.4 – The Return continues the Horizons season with ongoing story events that will see pilots thrust into battle against the Thargoids for the first time in gaming’s modern age. More will be revealed in coming months about this terrifying alien menace as humanity’s relationship with the Thargoids evolves throughout Elite Dangerous 2.3 and 2.4, bringing a new dynamic to the Elite Dangerous galaxy. Players will be forced to develop new tactics and technologies of their own, or see humanity’s grip on our sectors of the galaxy recede.

‘The Return will be a dramatic ongoing event for the Elite Dangerous galaxy,’ says Elite co-creator and Frontier CEO, David Braben. ‘Story events have hinted at the Thargoids’ return for a long time, but the Thargoids are returning at a moment when humanity is at its most divided. The Federation and Empire are at each other’s throats, a second tiny human-occupied bubble has scattered humanity’s greatest pilots, and Thargoid scout ships are drawing near. They have already probed our space, infiltrated our starports and found humanity to be vulnerable. What happens next will be decided by every Elite Dangerous player.’

Elite Dangerous: Horizons 2.4 – The Return will launch for all platforms in Q3 2017. Elite Dangerous is available now for PC and Xbox One, and is coming to PlayStation 4 on June 27.