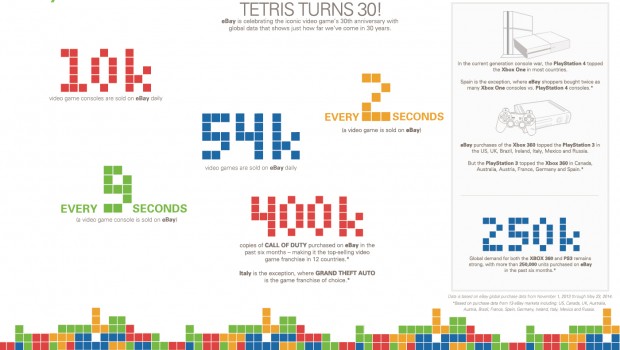 Today marks the 30th anniversary of Tetris – a game that has sold more than 170 million copies and topped the charts as one of the greatest video games of all time. To celebrate the milestone, eBay takes a look at today’s gaming industry – influenced by the falling shapes that hooked a generation.

Three decades later, Tetris still stacks up – with more than 4,000 listings for Tetris on eBay.com. While Tetris still sells, today’s gamers are fairly united across the globe when it comes to their favourite franchise: in the past six months, 400,000 copies of CALL OF DUTY games have been purchased on eBay – making it the top-selling video game franchise in 12 out of the 13 countries for which data is available. Italy is the exception, where GRAND THEFT AUTO is the game franchise of choice.*

For additional eBay gaming data, check out the attached infographic that shows just how popular gaming has become in the past 30 years. There is also a dedicated collection of must-have gaming items, which can be found here –http://www.ebay.com.au/cln/homecurator/Happy-30th-Birthday-Tetris/100558102014.