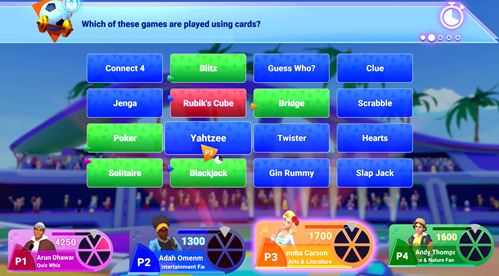 Trivial Pursuit Live! 2 takes the beloved trivia game to the next level with brand new questions, several question formats, two levels of difficulty for all player types, a diverse lineup of characters to choose from, and a new Twitch streaming mode.

With the new family questions set, all family members can show off their trivia knowledge. Play with up to three other players in the Classic mode or team-up for intense 2v2 battles in the Versus mode. Not only can players compete against friends and family, but they can also face other players from across the globe by bringing the challenge online. And with the brand new Twitch Mode streamers and viewers can now compete against each other in their favorite quiz game.