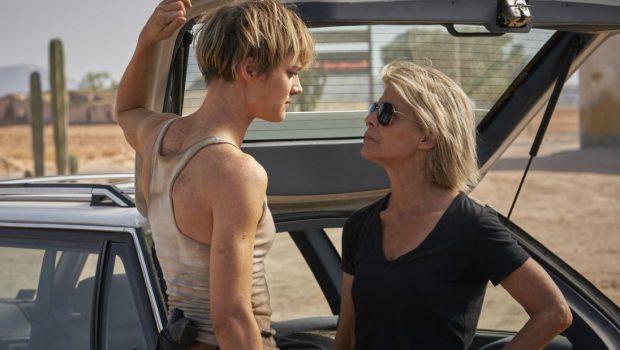 It is hard to believe that the lean, mean action sci-fi film The Terminator (1984) spawned a franchise that has endured for thirty-five years. Terminator: Dark Fate, directed by Tim Miller (Deadpool, 2016), is now the sixth entry. As with any franchise, there have been ups and downs. The first two films (both helmed by writer/director James Cameron and writer/producer Gale Anne Hurd) remain its most prized installments.

The recent entries, Rise of the Machines (2003), Terminator: The Sarah Connor Chronicles (2008), and Genysis, ranged from good, surprising, and abhorrent, respectively. Genysis was critically panned despite Cameron’s praise. The last two cinematic features, including Terminator Salvation (2009), were met with such intense scrutiny that Dark Fate is a response to those criticisms. It retcons [sic] all those entries and continues from the events of Terminator 2: Judgment Day (1991).

Regardless of the series’ inconsistencies, Dark Fate is on paper enticing. It has two major stalwarts returning, including Linda Hamilton, who enthralled audiences with her portrayal of Sarah Connor. With Tim Miller at the helm and a stacked cast of veterans and rising stars leading the way, Dark Fate looks like the course correction the franchise needed. Will the filmmakers succeed by jumping back in time to change the franchise’s history? 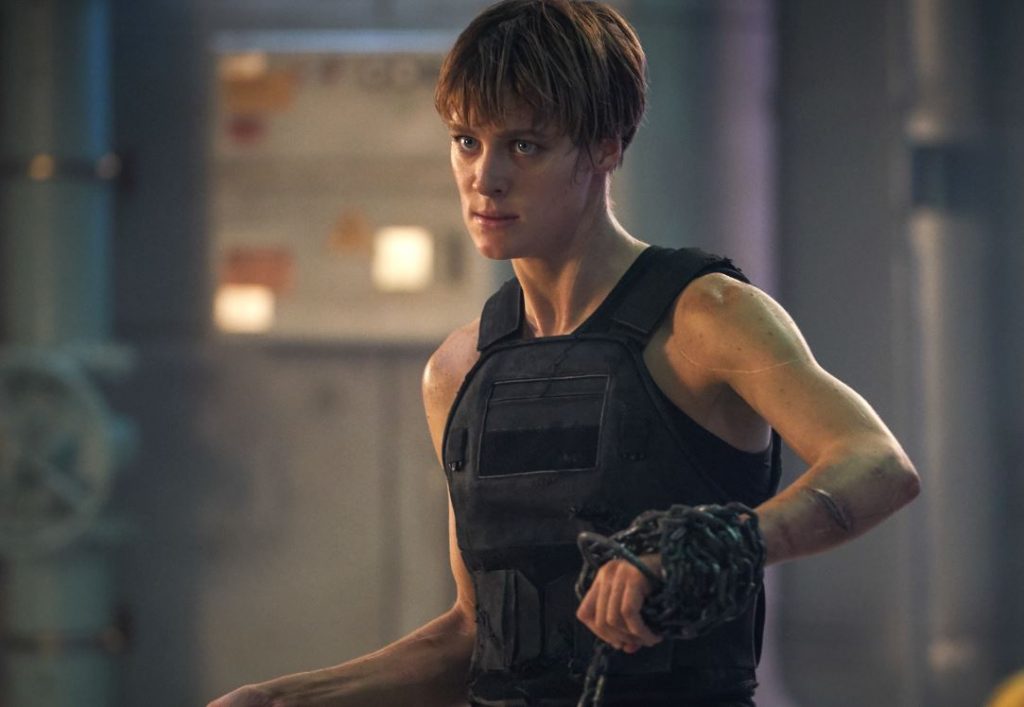 Natalia Reyes is Dani Ramos, an ordinary factory worker living an ordinary, content life with her ordinary brother (Diego Boneta), and her ordinary father (Enrique Arce). One day, she and her brother discover their jobs are on the line when they see robotic arms at their stations. Unwilling to take this lightly, Dani plans to tear her employer a new one until a menacing cybernetic figure, the Rev-9 (Gabriel Luna), attacks her and her brother! Just as they are about to face their impending doom, another cybernetic figure, Grace (Mackenzie Davis), jumps in to save them!

Since this is a Terminator movie additional story context is needed. Sarah Connor (Linda Hamilton) is also living a peaceful life with her son, John, after stopping the events of ‘Judgment Day’. After a tragic event, Sarah dedicates herself to destroying signs of future invaders, which sees her cross paths with Dani and Grace. The journey involves Dani discovering that her destiny is more than ordinary. With the women by her side and the threats in her way, her fate has only begun.

Dark Fate is both a sequel and a franchise reboot. It is led by three female leads, albeit with a script written by six male screenwriters (including Cameron, David S. Goyer, and Josh Friedman, best known for creating Chronicles). Due to the number of cooks in the kitchen, the film breaks no new ground. 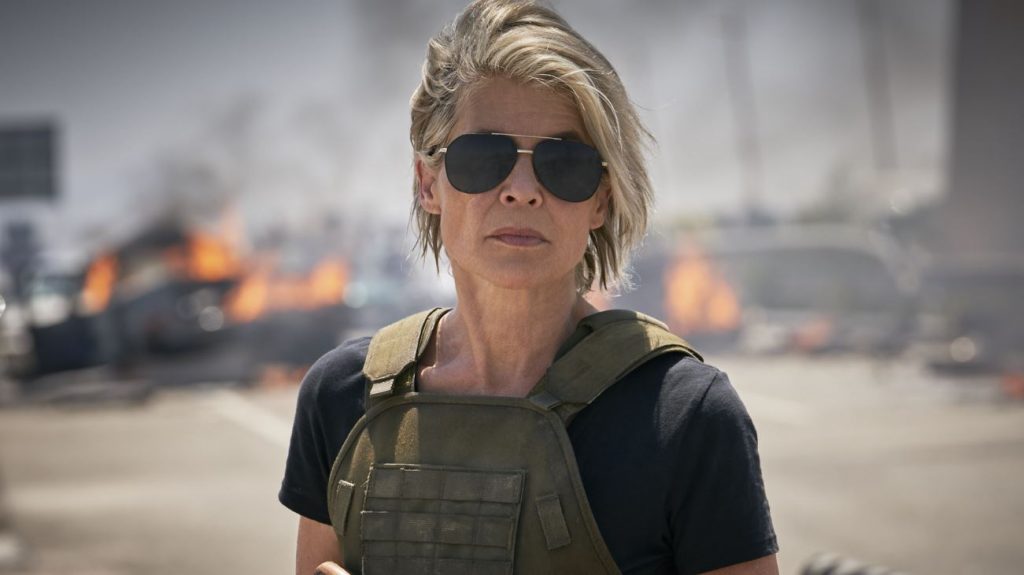 Even when pivoting towards potentially clever ideas, such as machines replacing labour jobs, Connor’s inner turmoil, and gradual human behaviour in cyborgs, they are never examined thoroughly to make Dark Fate interesting. The suspense is also ruined by Miller’s insistence on reliving past glories like a bad album cover. He rehashes set pieces from T2, such as the truck and helicopter chase sequences, and the story itself copies the first movie. Dark Fate also suffers from befuddling questions and jarring issues inevitably related to time travel. For example, why does Dani look the same age in the future? How is it that a T-800 can be sent from the future after the events of T2?

It would help if the characters were worth caring about and sustained the drama’s potential. The three women are obvious constructs of what a Hollywood ‘strong female character’ should resemble as opposed to being well-written, three-dimensional, and, most importantly, a woman. Their characterisations lack depth and their motives (being tough and fighting a male-driven force together) are embodied with predictable, pandering, and cheap tropes.

Exploring what drives their actions would have improved the drama immensely, particularly the backstories, the relationship between Dani and Grace, and Sarah’s view of the T-800. This major flaw is attributable to the absence of co-creator Gale Anne Hurd. Her positive influence was present in the franchise through to Rise of the Machines, specifically the growth of Claire Danes’ character, Kate Brewster. 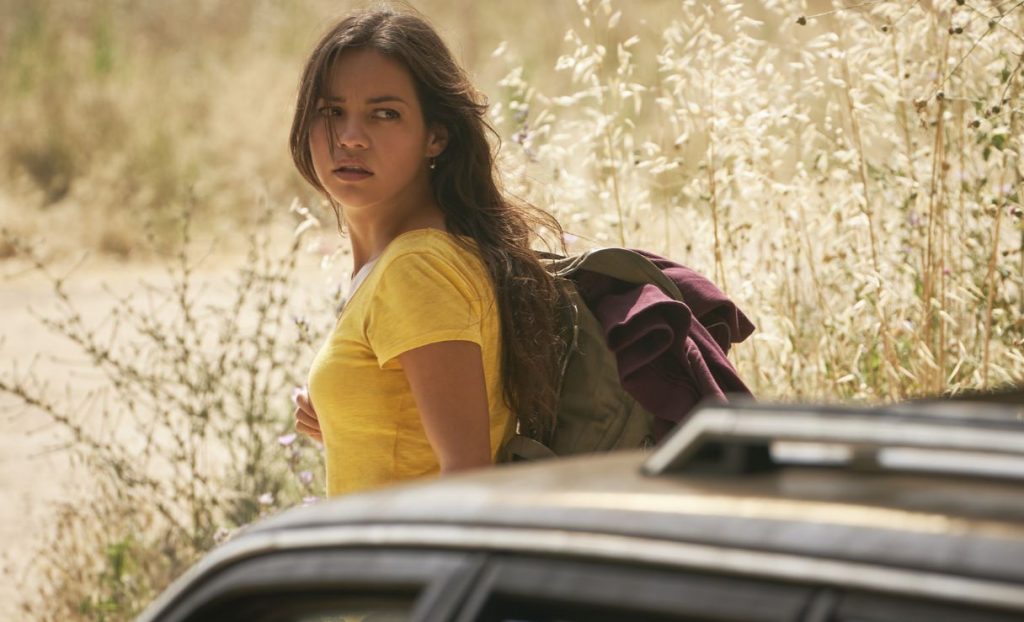 Despite wildly inconsistent CGI and a lack of character investment, the film’s set pieces excel. They are well-staged and provide the necessary thrills under Miller’s direction (as was the case in Deadpool). The climax is particularly strong and excitement emits from featuring four leads (including both iconic veteran characters) battling the Rev-9. Gabriel Luna’s portrayal is solidly menacing, including switching accents with mischievous effort.

Considering the material they are saddled with, the cast’s performances are great. By reprising her signature role as Sarah, Hamilton proves surprisingly cunning. She deftly veers between hard-edged, world-weary, and paternal, while also possessing a dark sense of humour. Davis lends Grace heart and she displays convincing action chops. Meanwhile, Reyes is solid as the de facto lead, Dani. She handles her character arc more smoothly than the script allows.

Schwarzenegger reclaims his mantle as the T-800 again and offers a surprising turn. Continuing the tradition of T2, where the T-800 learnt from human behaviour, Schwarzenegger provides a lovable, yet believable performance. There will be no spoilers as to why that is, but it fits the scope of his character and gives Schwarzenegger unforced comedic opportunities (unlike the comedy in Genisys; the nadir being the Cops montage) and an effective emotional through-line. It is also amusing seeing the T-800 struggling to be human. It is a metatextual look at the criticism of Schwarzenegger’s past acting chops. 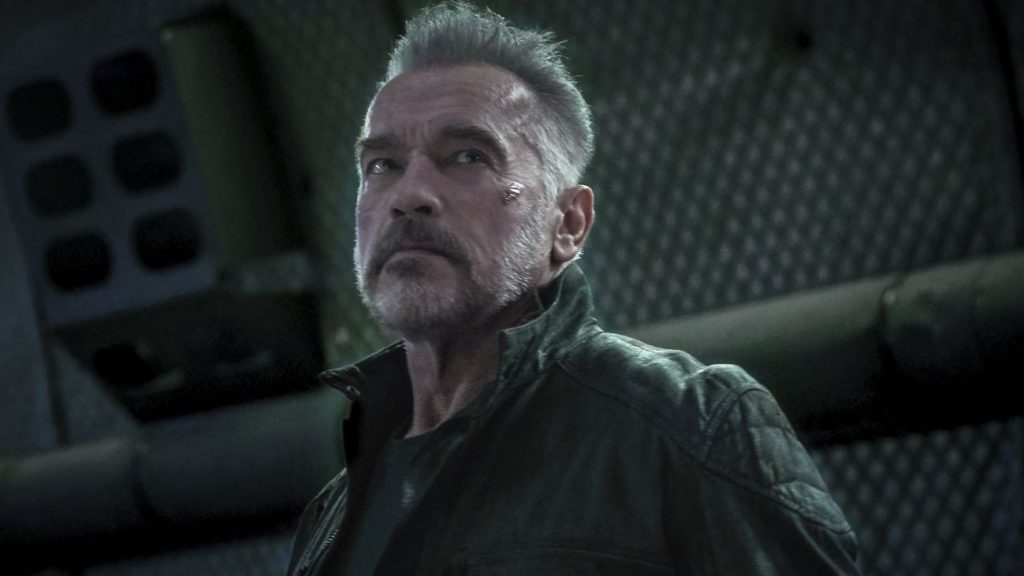 Overall, Dark Fate benefits from Tim Miller’s control of the action set pieces and an ensemble of strong performances. Linda Hamilton’s return particularly buoys proceedings. However, the writing suffers from rehashing too many signature moments from past entries and it fails to explore its characters and thematic ideas in depth. It is an entertaining action blockbuster, but as a new Terminator feature, it does not reach its true potential to be as great as the first two films.

Summary: Dark Fate is an entertaining action blockbuster, but as a new Terminator feature, it does not reach its true potential to be as great as the first two films.