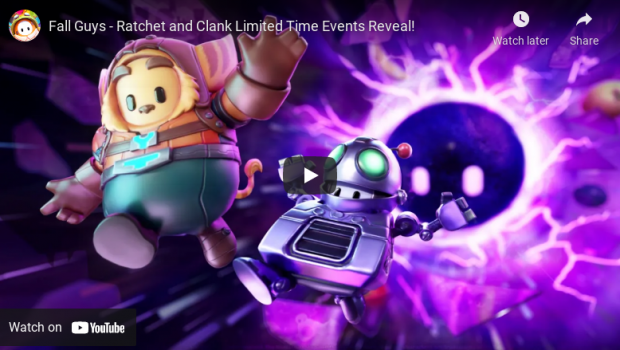 Greetings, bean fans. The Blunderdome Construction Crew are delighted to invite you to a dimension-hopping extravaganza featuring special guests… Ratchet and Clank!

Insomniac Games and Mediatonic are partnering up to send Ratchet and Clank through separate rifts – straight into the wonderful world of Fall Guys: Ultimate Knockout.

This galactic crossover will be the first in a series of Limited Time Events for Fall Guys. This means a whole new way to earn points and unlock unique cosmetic rewards…

through special themed Challenges – a totally fresh feature for Season 5!

Since they’ve got to get back to saving their world, Ratchet and Clank will only be around for a limited time.

A rocket-load of interdimensional treats will be falling into Fall Guys alongside our heroes. So what’s up for grabs? We’re talking exclusive Ratchet and Clank banners, patterns, emotes and even costumes!

The Ratchet Limited Time Event brings a whole week of special Challenges issued by the galaxy’s most heroic Lombax, with the chance to unlock…

Clank brings a new set of Challenges and oodles of exclusive futuristic rewards for players to get their hands on, featuring…

If a player competes in both events, they’ll receive an extra special piece of loot: A banner featuring Rivet, a new Lombax Resistance fighter! Because it would be rude not to invite our latest interdimensional hero to the party, right?