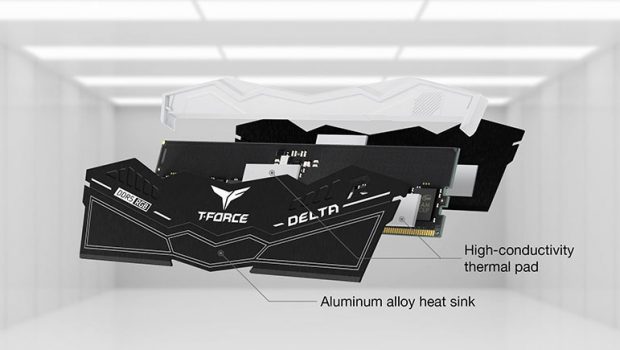 With the official release of the 12th Gen Intel® Core™ processors, manufacturers have been launching new memory modules. TEAMGROUP is leading the industry, dedicating themselves to the overall design of DDR5 memory modules but also developing patented cooling technologies According to different usage environment and demands. TEAMGROUP recently announced their exclusive thermal module for DDR5 RAMs for applications on T-FORCE’s gaming memory modules as a comprehensive cooling solution against the heat generated from the new PMIC structure and high-frequency operations on DDR5 memory. The exclusive heat sink for TEAMGROUP’s DDR5 products can reduce risks of error caused by memory overheating, it can also ensure stable, reliable performance from TEAMGROUP’s DDR5 products.

Since the early era of DDR5 memory, TEAMGROUP has been dedicated to developing optimal cooling solutions. The T-FORCE laboratory installed a thermal module on an exposed T-FORCE DELTA DDR5 16GB 6400MHz and showed that temperatures reach as high as 63.0°C when overclocked. With the thermal module, the temperature is reduced to 45.0°C when overclocked, effectively preventing the memory modules from crashing from overheating. Results from long periods of burn-in testing also showed that the thermal module for TEAMGROUP’s DDR5 products can effectively prevent the memory modules from overheating.

TEAMGROUP has continued to research and develop many different heat dissipation needs and is an industry leader when it comes to patented cooling technologies. Many of TEAMGROUP’s gaming memory modules and SSDs equipped with patented heat dissipation technologies have been recognized by many international design awards. As memory modules evolve, TEAMGROUP is proud to announce a dedicated thermal module for DDR5 products that can effectively increase heat dissipation and show the world TEAMGROUP’s expertise in the DDR5 era. In the future, we aim to strive with consumers toward the peak of performance in the next generation.