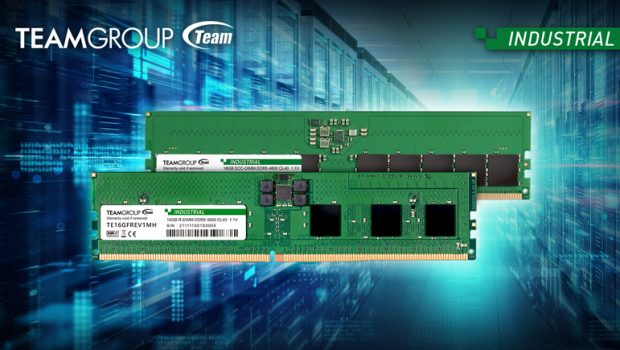 To usher in the new era of DDR5 and satisfy the demands for precise, high-performance, real-time computing, and computer multi-tasking in servers, data centers, and industrial computers, the world-leading memory brand TEAMGROUP is officially announcing today that TEAMGROUP’s DDR5 Industrial Server Memory is now in mass production. The DDR5 Industrial Server Memory targets applications in high-end servers and large databases and is integrated with TEAMGROUP’s patented technology, welcoming a total upgrade for next-generational servers such as Intel Eagle Stream and AMD Zen4 Genoa.

TEAMGROUP’s DDR5 ECC DIMM and DDR5 R-DIMM Industrial Server Memory modules can reach speeds of up to 6400MT/s and storage capacities of up to 128GB, with total energy consumption reduced to 1.1V. TEAMGROUP has also introduced Row Hammer Protection Technology to support the DFE (Decision Feedback Equalization) function to offer robust support for data storage. The memory is equipped with TEAMGROUP’s patented “TRUST technology”, which stands for Temperature, Robust, Unique, S.M.A.R.T. technology, and Trusty. With the TRUST technology, the industrial server memory can ensure reliable performance under harsh environments of high temperatures, high humidity, sulfurization, vibration, and shock as well as improving the overall reliability and durability of the product to guarantee that the memory can satisfy the diversified demands of next-gen servers. In addition, the DDR5 Industrial Server Memory has adopted a brand new framework. The greatest difference between the DDR5 and DDR4 server memories is that the power management is now transferred onto the DIMM, in other words, TEAMGROUP has optimized redundant circuit designs on the server, providing its DDR5 products a greater system stability, lower power consumption, better performances, larger capacities, and more stable signals.

Since partnering with major motherboard manufacturers in 2020, TEAMGROUP has continued to dedicate itself to the research and development of DDR5 memories and collaborated with manufacturers in various application domains to ensure the R&D process at each stage complies with compatibility tests. As the DDR5 market becomes increasingly popular, and next-gen processors from Intel and AMD set to launch in 2022, TEAMGROUP has shown its determination and R&D capabilities in developing DDR5 technologies by being the first to launch a series of DDR5 industrial memories, delivering a more reliable and safe industrial memory and storage solution to customers.