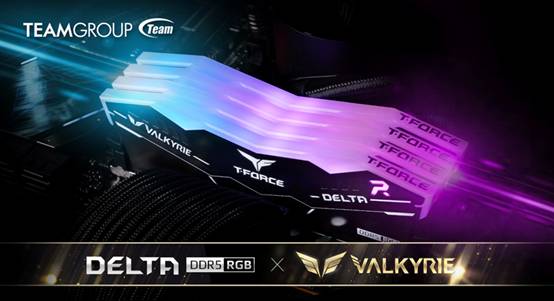 The two gaming product leaders, TEAMGROUP and BIOSTAR, have joined forces to release the T-FORCE DELTA RGB DDR5 VALKYRIE Edition DESKTOP MEMORY, the first collaboration of T-FORCE brand from TEAMGROUP and VALKYRIE series from BIOSTAR. The design is based on the popular DELTA RGB DDR5 DESKTOP MEMORY and its stealth fighter-influenced look, featuring the signature wide-angled heat spreader with dazzling RGB lightning. On top are the logos of T-FORCE’s iconic wing and the classic golden wings of the BIOSTAR VALKYRIE series, also integrating the concept of the warriors’ majestic wings in the form of a streamlined design spread across the heat spreader. Gamers can enjoy the memory’s striking visuals and legendary performance as T-FORCE and VALKYRIE carry them further in the gaming arena.

T-FORCE DELTA RGB DDR5 VALKYRIE Edition DESKTOP MEMORY is equipped with a next-generation RGB smart control chip, allowing gamers to use BIOSTAR’s Advanced VIVID LED DJ software to create a unique RGB setup for their PC. With both outstanding hardware and software supports, users can control and synchronize lighting effects any way they like, making it easy to create a divine look all will admire. The VALKYRIE Edition DDR5 supports the latest Intel XMP3.0, allowing gamers to enjoy the thrill and performance of overclocking in just a few simple clicks. Furthermore, its special thermally conductive silicone and power management chip (PMIC) cooling design significantly reduce heat, providing stable performance while it runs at high speeds.