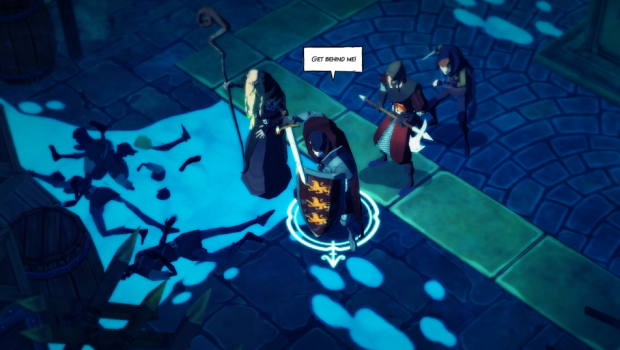 Sword Legacy: Omen is set in the candlepunk realm of Broken Britannia, a once-thriving kingdom full of alchemical and technological advances now fragmented by intrigue and deceit. As the vengeful knight, Uther, and his misfit band of companions, players will embark on a thrilling journey to locate the long-lost Excalibur. In this bloody, brutal take on the Arthurian legend, players will explore rich environments, experience a riveting storyline and survive intense turn-based tactical combat to define the fate of Britannia.

The partnership with Firecast and Fableware marks Team17’s first venture into the Brazilian games development scene. Debbie Bestwick, MBE, Team17’s CEO said, “Our label aims to work with the best independent creators around the world, help them build new IP and aim for sustainability. We’ve stepped up our international side significantly this year with recently announced partners in North America, Germany and Sweden. It’s a pleasure to welcome Firecast and Fableware to our ever growing family of partners as our first Brazilian team. There’s so much local talent being showcased at BIG Festival this week, we’re very excited to be working together with both teams. Sword Legacy: Omen is a high quality turn-based tactical game created by two very talented teams that brings another different angle to our diverse games label.”

Bruno Lanzarotti, Executive Director, Firecast Studio added, “The partnership between Team17, Firecast Studio and Fableware is very promising and shows the world the quality of Brazilian games. We are very happy to have such an established and respected British company supporting our vision of the Arthurian legends! All this makes us very excited and gives us confidence that Sword Legacy: Omen will have the strength to stand out not only in Brazil, but also internationally. With this partnership, we believe we are doing something great, important, that brings us pride in representing Brazilian games development and showcasing the quality and creativity we can bring to gamers worldwide.”

Arthur Protasio, Creative Director, Fableware Narrative Design said, “Partnering with Team17 feels like a pupil being acknowledged by the master. Not only are we long time Worms fans, but we also keep a close eye on the great games published by the label. That’s why when the Brazilian Game Developers Program and the Goethe Institut invited me to Quo Vadis in Berlin, I knew it was THE opportunity to pitch to Team17’s Debbie Bestwick. Just as Fableware teamed up with Firecast and together began a unique co-production, we believe Team17 is a most valuable addition to this endeavour. With each company excelling at their expertise, we have high hopes for the final product and can now proudly say we’ve joined this experienced indie family.”