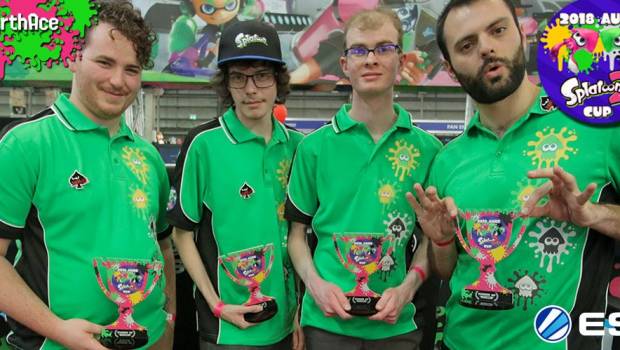 23rd April, 2018 – After a month of splatting at the highest level across Australia and New Zealand, the two Splatoon 2 top-ranked teams came together for the 2018 AUNZ Splatoon 2 Cup’s grand finale in Melbourne this past weekend. After a thrilling grand final at Supanova Melbourne, it was team Yeah Nah who came out on top with a 5-0 victory against ScarthAce.

Not only did both teams leave with special jerseys and gleaming trophies, but team Yeah Nah has now earned the title of Splatoon Australian and New Zealand Champions and will represent Australia and New Zealand on the biggest stage of all, at the Splatoon 2 World Championship from 11th – 12th June in Los Angeles. They’ll be up against the top teams from the U.S. and Canada, Europe, and Japan – can they emerge victorious on the world stage?

To see how team Yeah Nah secured their ticket to Los Angeles, you can watch the 2018 AUNZ Splatoon 2 Cup enthralling final on the ESL Australia Twitch channel. Although both teams managed to impress throughout the tournament, it was team Yeah Nah that stole the show with a 5-0 victory against ScarthAce in the final that included some very close results, with the first game decided by 0.2%.

Team Yeah Nah may have taken the win, but two-time grand finalists ScarthAce were worthy contenders, showing masterful skill and great sportsmanship. Qualifying on top in the second round of 2018 online qualifiers, ScarthAce are no strangers to the big stage, having achieved runner-up in last year’s 2017 AUNZ Splatoon Cup. We thank ScarthAce for their continued perseverance, dedication and inspiration they provide to everybody in the Splatoon community.

Thank you to all of the players who participated in the 2018 AUNZ Splatoon 2 Cup, and to all of those who tuned in to the livestream or attended the grand finale at Supanova in Melbourne. We look forward to welcoming more players into the Splatoon 2 community as it continues to grow long into the future.

In addition to this amaz-ink news, the amiibo figures of Pearl and Marina, two of the most popular new characters in Splatoon 2, will be releasing in Australia and New Zealand on 13th July. The amiibo figures will launch in stores exclusively as a 2-pack with a suggested retail price of AU$34.95.

Stay tuned to Nintendo social media channels to follow team Yeah Nah’s preparations for the Splatoon 2 World Championships, and more details about the Los Angeles event will be announced in the future.

Team Yeah Nah were crowned Splatoon Australian and New Zealand Champions in Melbourne on Saturday, and viewers can relive the excitement by watching the final on Twitch. Team Yeah Nah will now have its eyes on an even bigger prize as it prepares to compete at the Splatoon 2 World Championship which takes place from 11th – 12th June in Los Angeles. On 13th July, the Pearl and Marina amiibo will be available as a 2-pack in stores for SRP AU$34.95.