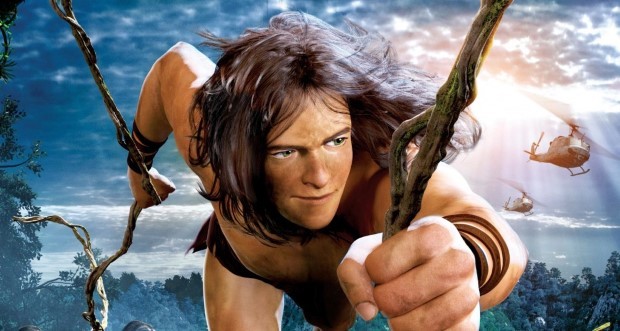 Summary: Technically proficient for the most part and aesthetically pleasing, the film is let down by a muddled script riddled with plot holes and a deviation from the works of Edgar Rice Burroughs that doesn’t quite work within the context of this universe.

The latest incarnation of Edgar Rice Burroughs’ classic literary character Lord Greystoke, better known to audiences as “Tarzan, the King of the Jungle”, Tarzan 3D is a strange beast that tries its best to update the legend for a modern audience but falls far short of the mark. 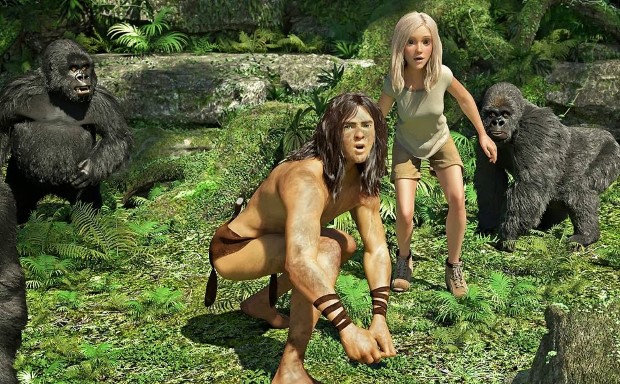 The first hint that you’re not in Kansas anymore is when the film opens in space. Yes, the latest in a long, long line of adaptations of Tarzan actually begins by offering a possible explanation behind the extinction event that wiped out the Dinosaurs, alluding to some possible extraterrestrial influence behind the meteor that kickstarted the age of man. Why is any of this pertinent to a Tarzan film, you may ask?

Well, in an attempt to add an extra dimension to the film, perhaps fearing that audiences wouldn’t want to watch yet another straight adaptation of Tarzan swinging from vines through the jungle with Jane and Cheetah, the writers behind Tarzan 3D have awkwardly inserted a meteor imbued with magical properties and a villainous business man hoping to harness its energy to rule the world into the story; whilst this gives the story a kind of anti-capitalism stance and a tangible enemy for Tarzan to rally against, ultimately these additions only serve to highlight just how ridiculous and cheesy the film is, especially when things really veer off the rails in the film’s second half. 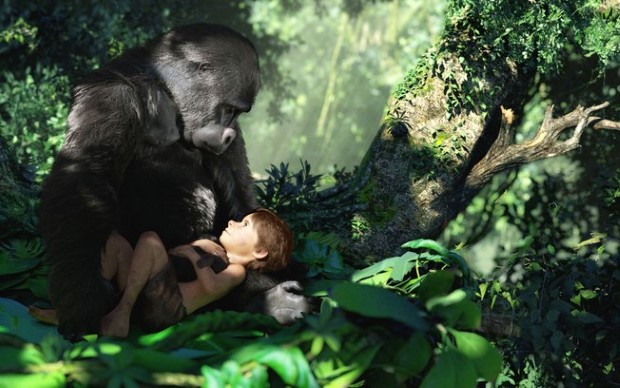 Most of you are no doubt familiar with at least some aspects of the Tarzan story and the rudimentary elements are all there: A young child loses his parents in a plane crash and is adopted and raised by apes, reverting to an animalistic state but still retaining some elements of humanity.

The plane crash in this version is caused by the young Greystoke’s father interfering with the recently discovered meteor after the family were enlisted to seek it out by a mysterious man named Porter and as the film opens we also see the circumstances that lead to Tarzan’s ape mother Kala deciding to adopt him, namely the loss of her own child. 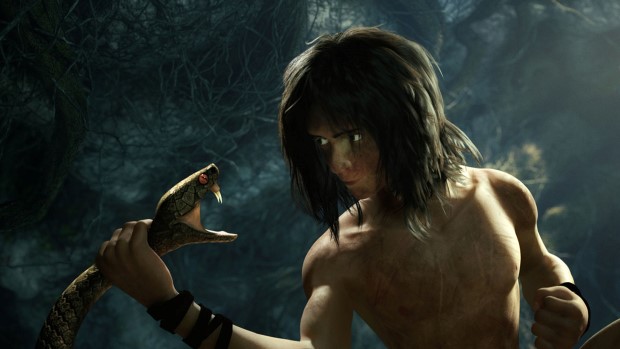 Years pass and the young boy becomes a man whilst his father’s corporation, now ran by generically evil executives, decides to once again enter the jungle with the goal of securing the cosmic meteorite, setting in motion a sequence of events that eventually lead to Tarzan meeting the love of his life, Jane, before embarking on a sci-fi tinged adventure to save the world from annihilation.

Credit must be given for attempting to imbue the traditional story with more fantastical elements but the sad truth is that these stylistic choices only serve to muddy up an already fairly lacklustre and overstuffed script. The voice acting is generally solid throughout, featuring Kellan Lutz as Tarzan and Spencer Locke as Jane, and the visuals are rendered quite beautifully (Well, aside from the waxy, awkwardly motion captured human characters, particularly their faces) but overall Tarzan 3D offers a pretty face but no real substance to offer audiences. 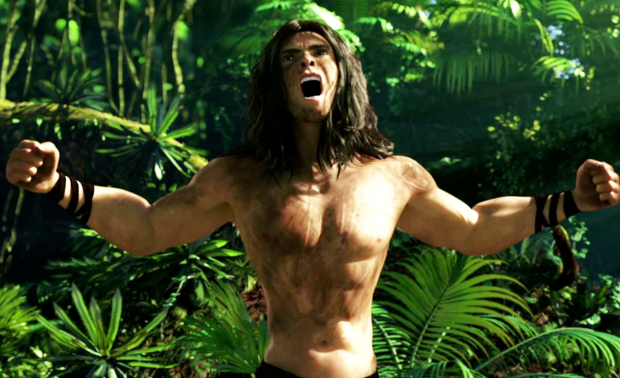 Tarzan 3D comes to Blu-ray with an impressive transfer that, despite some moments of overt three dimensional gimmickry, provides an overall solid and entertaining viewing experience free of any major anomalies in both the audio and visual department.

The depth of field of the image is quite accomplished, providing a nice, immersive three dimensional image that boasts vivid colours and naturalistic character movement. However, the faces of the human characters come off as too plastic-like and strangely blank whereas the jungle environment and its denizens, most notably the apes, look much more realistic; this isn’t a mark against the transfer itself, though, as the slightly off quality of the human characters is due to the animation process.

Tarzan 3D’s audio is presented via the industry standard DTS-HD 5.1 lossless master track that successfully captures the aural experience of the Jungle environment; dialogue and ambient noises are clearly delineated and there is no cross over between speaker channels.

Overall another solid transfer from Icon. 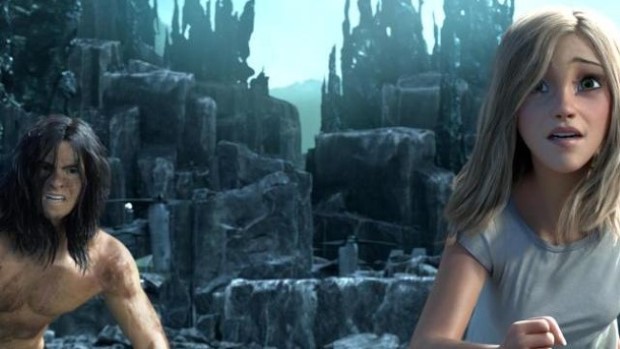 There are a few brief featurettes included on this release that offer a look behind the scenes at the motion capture process, the training routine that the actors playing the Gorillas had to go through as well as featuring interviews with cast and crew.

Given the nature of the film (Completely animated using motion capture technology) a lot of the action takes place in giant warehouses filled with guys in skin-tight suit covered in ping pong balls, which isn’t exactly the most visually exciting of experiences but it does offer a fascinating insight for anyone curious about the intricacies of working in motion capture. 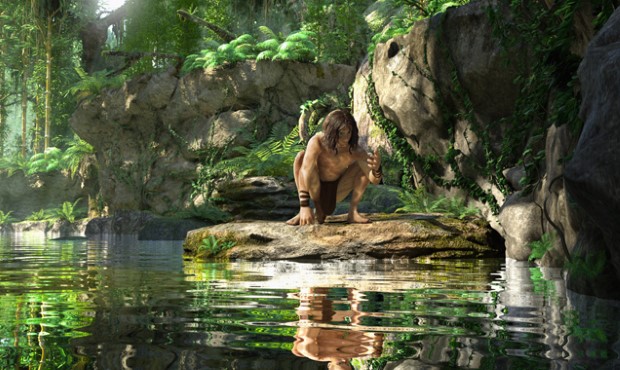 Unfortunately not a patch on Disney’s recently re-released interpretation of Tarzan, Tarzan 3D is nonetheless an ambitious effort that, despite its many shortcomings, should serve to at least keep the littluns entertained.

Technically proficient for the most part and aesthetically pleasing, the film is let down by a muddled script riddled with plot holes and a deviation from the works of Edgar Rice Burroughs that doesn’t quite work within the context of this universe. 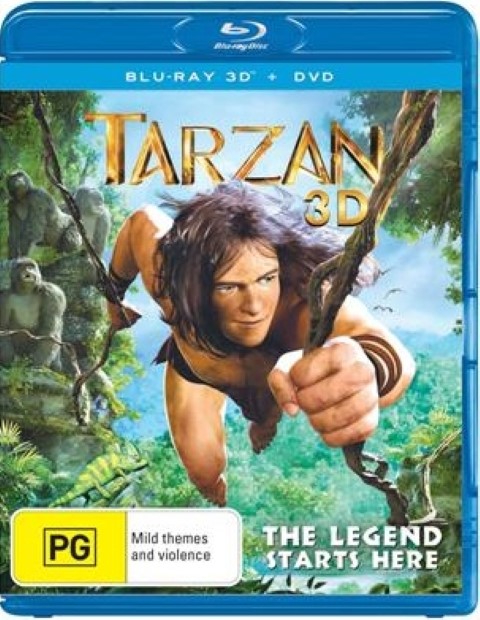