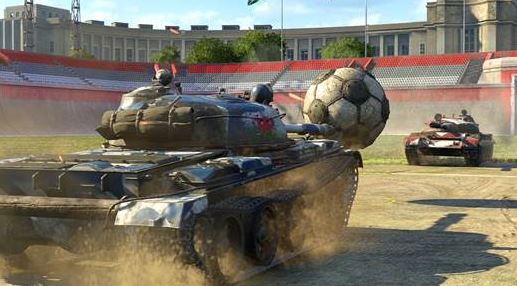 June 14, 2016 — It’s time for kick-off in World of Tanks. The special Tank Football 2016 event is now live, so lace up those boots and take to the battlefield in 3-vs-3 matches. Putting its own twist on the beautiful game, two teams race around the pitch to be the first to score three goals in a seven minute match.

Tank Football 2016 is scheduled to run for around a month. During the event, all players will be credited the unique T-62a Sport (T-62a S) with a free Garage slot. To join the event, all you have to do is select your T-62a S and click the Battle! button.

“You may think Tank Football 2016 is a reincarnation of what we had a couple of years ago,” said Anton Pankov, World of Tanks Global Publishing Producer. “However, the game has gone through a lot of changes since then. Tank Football 2016 sticks to the classic 3-vs-3 format, but the new game physics give you a lot more control to pull off great moves. With a new overtime mechanic implemented, games are now even more exciting because there’s no chance of a draw. Every match will have a winner.”