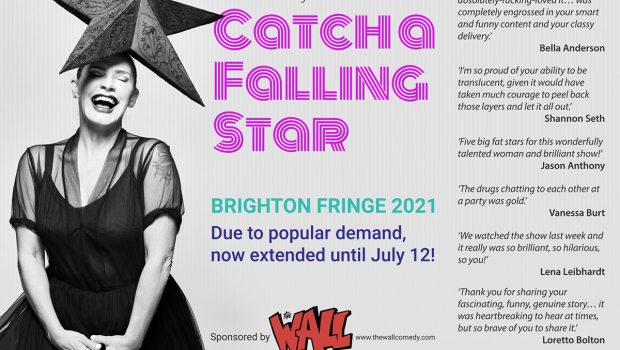 After six years living in Berlin, Tania Lacy, Australia’s original funny girl has returned down under to call Australia home again. With a career spanning 30 years Tania is best known as a TV Presenter, Actress, Author, Writer, Screenwriter and stand up comedian. Her show “Catch a Falling Star” is currently showing (virtually) at the Brighton Fringe Festival in the UK and has been extended to July 12 due to popular demand. Tania will look at opportunities in Australia for presenting the show.

With the pandemic making schooling difficult in Europe and classes held primarily online, it was a family choice to return home for Tania’s son to attend high school on campus.  “A large part of our decision to move back was based on our son’s education and socialisation”. Said Tania, “of the last 12 months, Per has been in a classroom for three of them. There has been no hanging out with his mates, there have been none of the regular rites of passage. It’s been school online and communicating with friends through video gaming and social media. We wanted to give Per more than covid regulations in Germany allowed and we’re very lucky to be in a position where we can.”

Tania and her family will quarantine in Howard Springs until July 8 before settling in Cairns. “We are so excited to be back.” Said Tania, “I think that ‘pull’ to the homeland never really goes away. Berlin was an exciting city and it gave me so much, artistically and socially, but our new adventure awaits. We’ve ‘gone troppo’ deciding to settle near Cairns. If covid showed us one thing it’s that we need a break from living in cities. After a 6 month lockdown, we can’t wait to be amongst nature, to swim in temperate waters. And I can’t wait to hit the northern standup stages.”