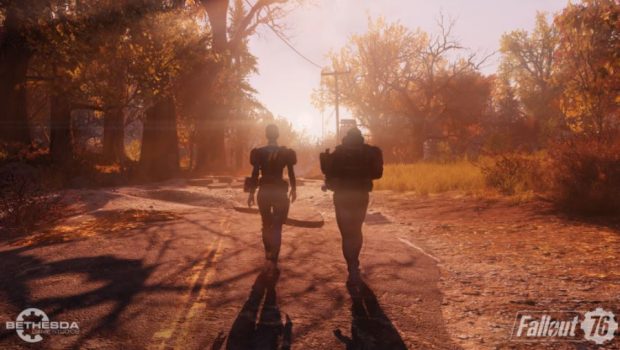 Feeling schwifty? You’re about to. We’re taking the biggest streamer on the planet, a once-in-a-generation rap talent, the most beloved animated comedy duo of our time, and forcing them to survive together in the wasteland of Appalachia. The good news is you don’t have to travel to an alternate dimension to find out what happens!  Tune in to Mixer or Twitch on Friday, 9th November for an unprecedented Fallout 76 stream on Xbox One featuring Ninja, Logic, and none other than Rick and Morty (yes, that Rick and Morty) for what is sure to be the streaming event of the year.

Catch all the action beginning at 1:00pm AEDT on Friday, 9th November.

Tales from the West Virginia Hills

The world of Fallout 76 is steeped in mystery. But when you’re not trying to discover what happened to everyone after the bombs dropped, you might find yourself asking a different question: What’s that figure, lurking in the dark? The answer probably isn’t as friendly as you might like. The Tales from the West Virginia Hills holotape series is here to give you an idea of what to look out for if you hope to survive.

Curse of the Wendigo! – https://youtu.be/6mDe9Plv8bU

It has been said that money is the root of all evil. So, when greed knows no bounds and avarice goes unchecked, what other appetites might take hold? Curse of the Wendigo! chews over this very question.

In Sideshow Snallygaster, the carnival has come to the Tyler County Fairgrounds. Billy Harding and his dad wander past the games and rides as a sideshow Barker touts a frightful attraction.

Not all creatures are of the land; some stalk the skies. One such boogeyman has been reported for generations by mystified West Virginians. The Mothman Cometh! begins in Morgantown Municipal Hospital. We join young Mary Scarberry at her bedside as she wakes, looking a little worse for wear.

The Best of Grafton – https://youtu.be/zdKX6htqR50

The Beast of Grafton takes place in the rural hills near Grafton, where locals have reported a strange creature lurking in the woods. Robbie Cockrell and Peggy Mansfield were out on a date, celebrating Peggy’s birthday, and a full moon loomed large as they drove.

The Strange Encounter In Flatwoods – https://youtu.be/agAa-r-h9p4

Who Goes There?: The Strange Encounter In Flatwoods opens on a fateful night, when a young Pioneer Scout, Fred Fisher, finds himself in quite the predicament, having taken a spill and fallen into a dark place.

The Fallout 76 B.E.T.A. is available now for all players who pre-ordered the game on Xbox One, PlayStation 4, or PC. Fallout 76 releases worldwide on November 14.