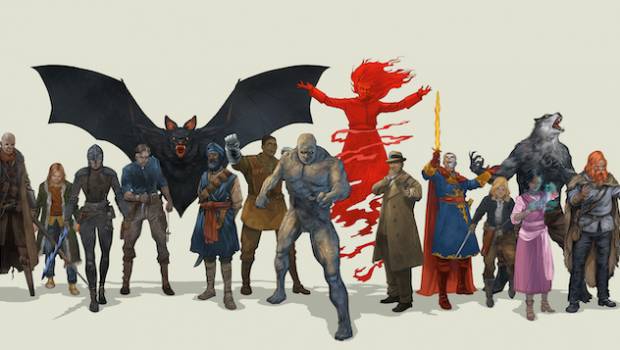 The legendary creator of HELLBOY, Mike Mignola, is reuniting with NEW YORK TIMES bestselling novelist Christopher Golden, acclaimed artist Peter Bergting, and colorist Michelle Madsen for three all-new comic book stories. These three new titles—COJACARU THE SKINNER, IMOGEN OF THE WYRDING WAY, and THE GOLEM WALKS AMONG US!—present three standalone “Tales from the Outerverse,” which will expand the fan-favorite world of BALTIMORE and JOE GOLEM, as well as upcoming series LADY BALTIMORE, in unexpected and unusual ways. In these stories, the mythical hero Cojacaru the Skinner returns from the grave, the powerful Wyrder Imogen pursues her foes, and the legendary Golem awakens…

“Way back when, BALTIMORE was just intended to be a novel and so was JOE GOLEM,” said Mignola. “But then, HELLBOY was originally going to be a few comics, and I never imagined it would take off and turn into whatever the hell it is now. These things sometimes have a life of their own, and the best thing you can do is feed the fires and see where things are going to take you. In the case of BALTIMORE and JOE GOLEM, you have both Chris and I feeding the fire. The best kind of fire—a fire made of folklore, monsters, and magic. So really, there’s no limit to how far this thing might go, especially with artists Bridgit Connell and Peter Bergting onboard doing, I think, the best work of their careers thus far.”

The release of the new “Tales from the Outerverse” titles will follow the publication of the eagerly anticipated new series LADY BALTIMORE: THE WITCH QUEENS, which debuts from Dark Horse Comics on March 24, 2021. That series follows the adventures of the woman who was once Sofia Valk, who must embrace the title of Lady Baltimore as witches, monsters, and Nazis march through Europe.

“From the moment Mike and I realized that Baltimore and Joe Golem existed in the same universe, it started to grow and evolve in our minds,” said Golden. “I knew Sofia’s story wasn’t over and we’d talked about doing LADY BALTIMORE, but it felt like this new universe was so much bigger than that, just bursting with possibilities. In the previous books we had already established a deep mythology and a broad timeline, but we wanted to explore a time where the big story points would overlap. Lady Baltimore was born of that. But with so many and so much world-building to explore, we knew that wasn’t enough for us, and so “Tales from the Outerverse” was born. That’s the banner title for three separate, smaller stories spotlighting three of our favorite characters. COJACARU THE SKINNER, IMOGEN OF THE WYRDING WAY, and THE GOLEM WALKS AMONG US! each tell a self-contained story, but they’re also part of this broader story we’re telling of this world, the Outerverse, as our version of World War II kicks off. It’s all rooted in the origins of evil from the Outer Dark, which is where The Outerverse gets its name.”

About The Tales From The Outerverse Titles

Cojacaru the Skinner, the strange and enigmatic bane of Eastern European witches, has been dead many years. But from a bloodied French town in the throes of World War II, a plea for help carries across the winds of time. A desperate band of resistance soldiers and their white witch allies rest their fate in the hands of Cojacaru’s ghost. And when she answers their call, it will be heard near and far.

Called forth from beyond the grave to fight witches once again, Cojacaru the Skinner wreaks her havoc on the witches of the Hexenkorps. But with their evil buoyed by the violence of the Nazis and the supernatural presence of the Outer Dark, the ghostly warrior will have to depend on a ragtag group of white witches and resistance soldiers to back her up. It will prove to be a desperate fight indeed.

This is the story of Cojacaru the Skinner, once a small girl named Crina who befriended a witch-hunting golem. It is a story of horror, desperation, and, ultimately, hope.

While on a mission in Denmark with her fellow Wyrders, Imogen hears some odd news: hundreds of refugees fleeing the spread of Nazism are traveling into the nearby forest, and never returning. Helping a young man find his refugee family will bring Imogen face-to-face with some of the worst that war can inflict upon those in need–and make her ask the difficult question of what she’s really fighting for.

The Golem has a long memory….

After being awakened from his long sleep in a shrine in Eastern Europe, Josef the Golem aids in the fight against the witches that once again terrorize humanity. Deployed to a small village where a cult has taken root, Josef encounters not only witches but an old enemy who remembers him well…and is out for vengeance!

Brought to a small fishing village to fight a cult, Josef the Golem finds himself face-to-face with one of his oldest enemies from centuries of fighting witches. And when the fight comes to a head, the ultimate question will be whether fighting witches or saving humanity is really at the heart of the Golem’s purpose.

Artist Peter Bergting has created a dazzling triptych for the variant covers of COJACARU THE SKINNER #1, the IMOGEN OF THE WYRDING WAY one-shot, and THE GOLEM WALKS AMONG US! #1.\“I just feel so fortunate to still be doing this,” said Bergting. “This year is my seventh year on the team, and I thought for sure that I was going to be booted from ever working with Mike and Chris after the first issue I did for Baltimore way back in 2014, the one that introduced the character that would go on to become Lady Baltimore. I keep wanting to improve. I’ve had some big shoes to fill over the years, and I think in these issues that I’m doing now I’m finally coming into my own (in a panel here and there, at least). I hope we get to do more of these, it was super fun to revisit some of my favorite characters of all time.”

“I can’t express how much joy is going into these comics, and to get to work on them with Mike, and to collaborate with artists the caliber of Bridgit Connell and Peter Bergting, makes it all the better,” said Golden. I can’t wait for readers to explore the Outerverse with us!”

“When we announced LADY BALTIMORE, we teased that it is just the start of something bigger,” said editor Katii O’Brien. “These new comics will dive into characters familiar and new, and explore the legends, witchcraft, monsters, and warriors in this world.”