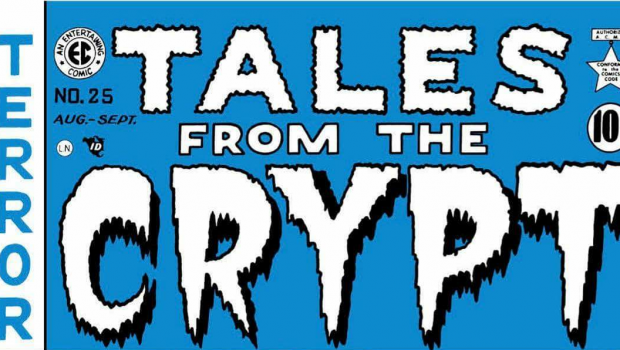 TALES FROM THE CRYPT VOLUME #2 REVIEW

Summary: An absolute classic with thrilling themes, jammed packed with drama, gripping adventures and tales of the weird and wonderful.

Dark Horse Comics have been digging through the EC Archives to bring us some of the most legendary comics from the late Golden Age. The leading horror anthology of comics, without a doubt must be Tales from the Crypt. The importance of these comics should not be underestimated, as they produced some of the most inspirational stories and artists that have impacted the comic, film and television industries. The most recent edition that is being released from Dark Horse Comics is the Tales from the Crypt Volume 2. This is an excellent opportunity for us all to be able to experience some of that ghoulish EC magic! 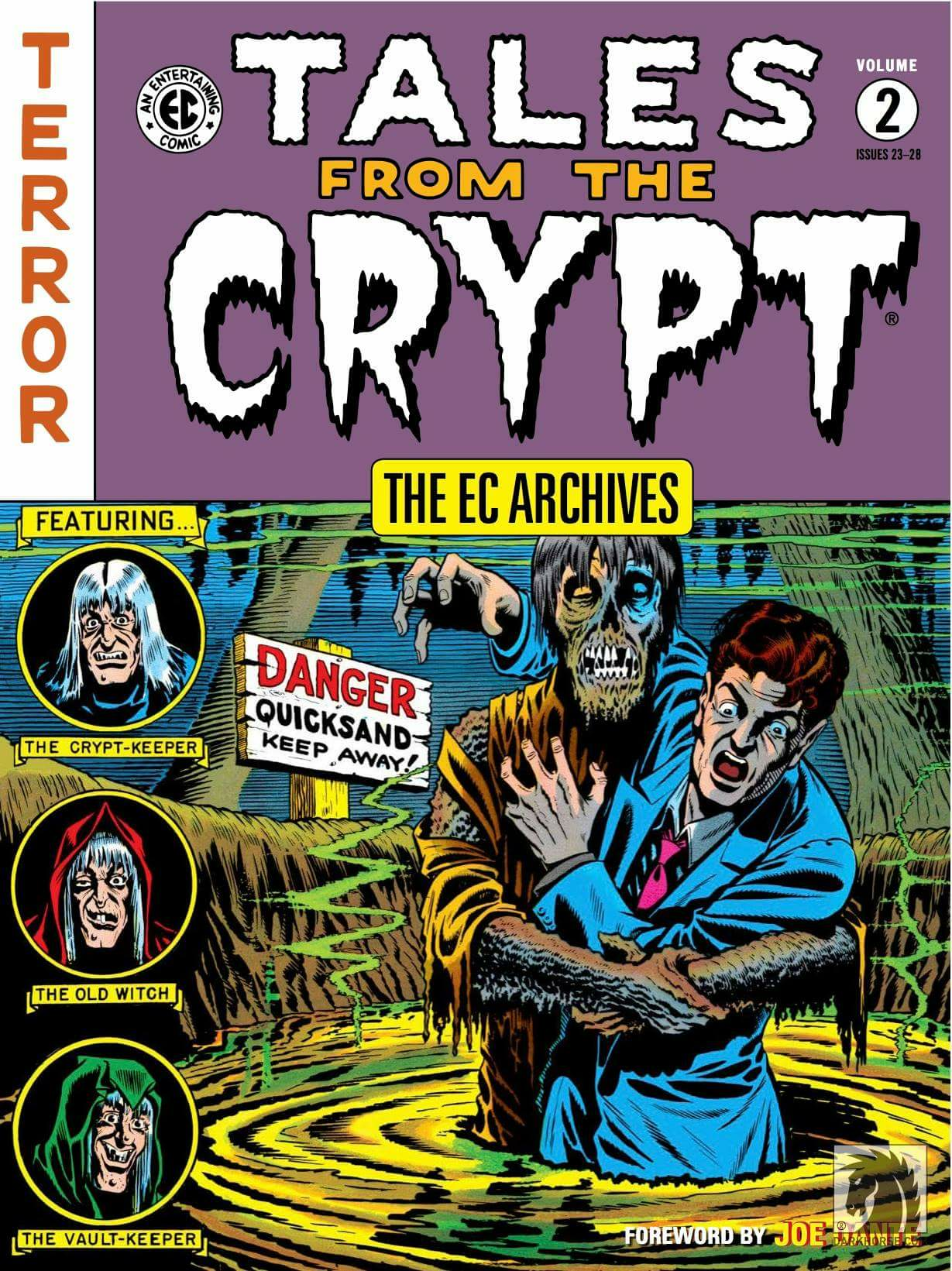 Before reading any EC comic, I believe that it’s important for a little history lesson. The story of Bill Gaines and EC Comics is a short but turbulent one. From 1945-1955 they produced some of the industries greatest and most influential artists and writers. EC featured titles that encompassed a variety of genres, such as crime, science fiction, war, shock and humour comics. The most notorious of these tiles were their horror comics, such as Tales from the Crypt, The Haunt of Fear and The Vault of Horror. They published comics that were of a very graphic nature, depicting images of bloody and violent deaths, reanimated and rotted corpses, dismembered and mutilated bodies and all sorts of gross and terrifying imagery. However, this no holds barred approach eventually had effects that caught up to them and the grotesque and dark nature of many crime and horror comics were accused of being linked to juvenile delinquency. At the forefront of this attack on the industry was Dr. Frederic Wertham, a psychologist who spearheaded an aggressive campaign against horror and crime comics. After a very public campaign to censor the industry, EC Comics was forced to drop many of its most successful titles in 1955, crippling the company right in the peak of its prime. However, all wasn’t lost as these legends went on to make the iconic MAD magazine, which is considered to be a legacy of the company! So in the end, EC was finished but the creative team went on to produce one of America’s most iconic magazines. 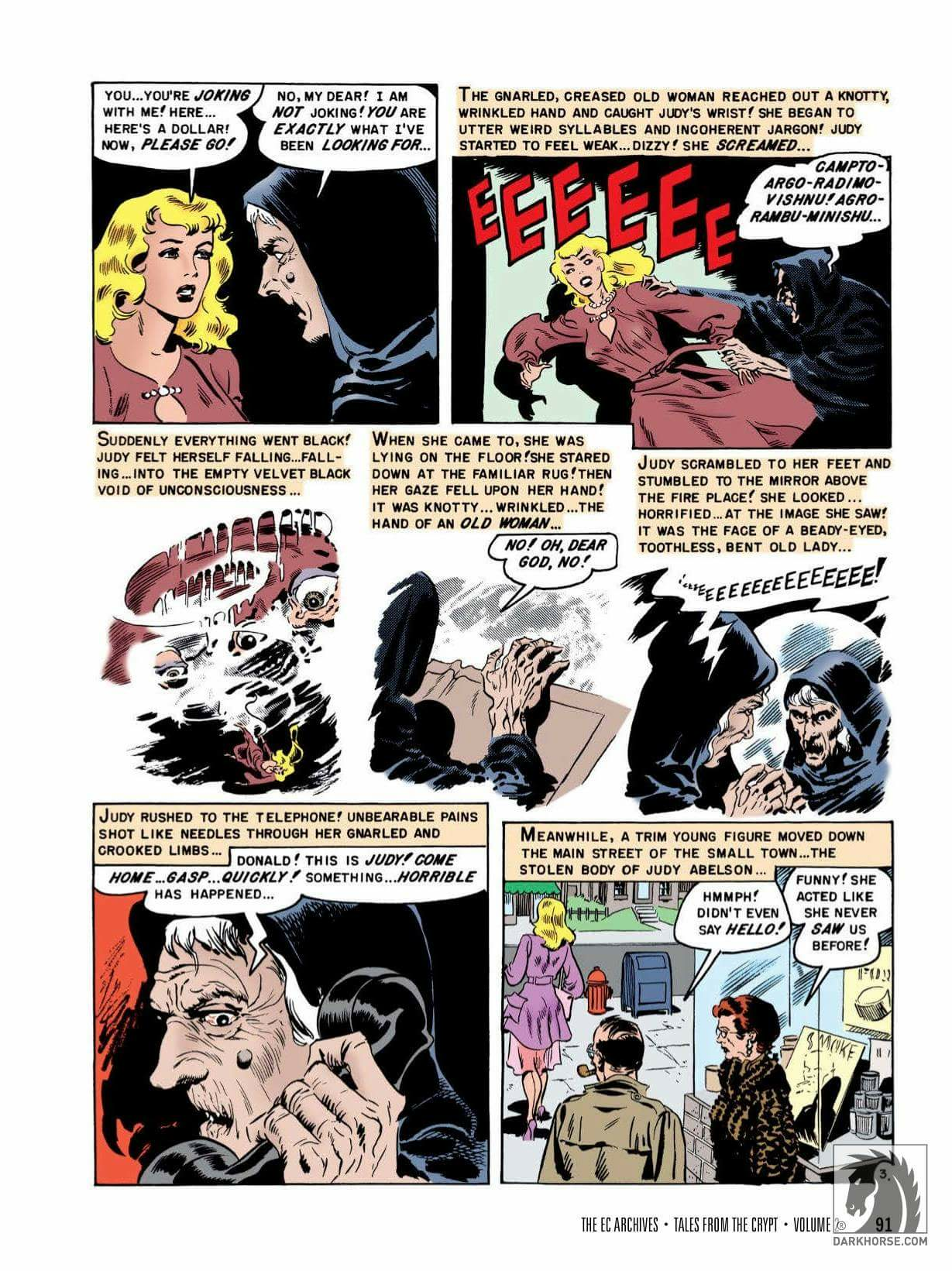 So with that in mind, it’s always exciting and nostalgic for a lot of people to be able to once again have access to such a great anthology of classic horror comics. This volume dates from 1951-1952 and contains 6 issues numbered from #23-#28, with 6 stories in each issue.  Tales from the Crypt Volume 2 is filled with an abundance of short horror stories that are of a grotesque and shocking nature. The shock value maybe high, however it’s also very funny at the same time, as humour is littered throughout its pages. Some of the stories are quite confronting, as we encounter ordinary people who are forced into situations where they have to do things that are taboo and shocking. Last Respects! written by Al Feldstein with art by Graham Ingels is one such story where a helpless man is unwillingly forced into cannibalism out of desperation. Stories like this really encapsulate a sense of fear, despair and misery and I personally find are quite though-provoking and scandalous. There are also a lot of stories that possess supernatural themes of a ghoulish nature, where we get to see vampires, voodoo curses, werewolves and reanimated corpses. I find these stories actually quite fun to read, as I really enjoy a good ol’ fashioned horror story. Scared to Death! written by Al Feldstein with art by Wally Wood focuses on the living dead with an unusual twist, as the man doesn’t believe that he is dead! There are so many different stories in this volume and they are all in their own way enjoyable, fun to read and often quite shocking as they tackle some taboo subject matter. This volume really is a cabinet of curiosities for all sorts of horror enthusiasts! 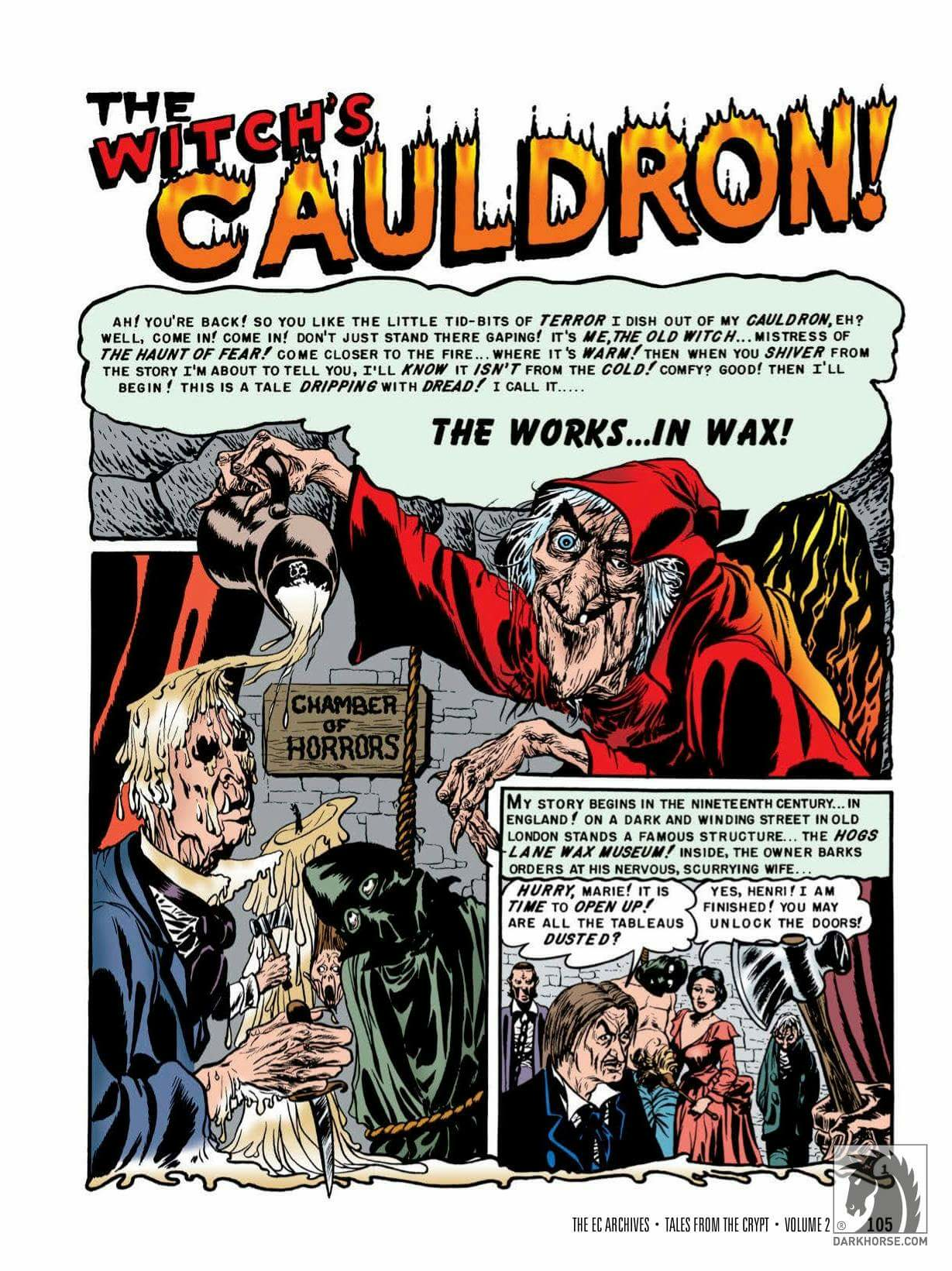 What’s really excellent about reading Tales from the Crypt is the collection of some of the industries most gifted and influential artists. In this volume alone we get to see art by Jack Davis, Johnny Craig, Wally Wood, Joe Orlando, Graham Ingels, Al Feldstein (who also wrote every story in this volume) and many other industry legends. These are the guys that really influenced and shaped the comic industry through their own unique styles. EC was one of the few companies to allow their freelance artists to draw in their own fashion (and also sign their own work), allowing for an abundance of eclectic and unique art styles. In this volume you will see a variety of cartoonish, realistic, lurid, vulgar and even beautiful drawings. All of them excellent and exceptional in their own way.

One must remember that is comes from the original archived material, so the layout of this volume is like the original comics, all with advertisements, letter columns and fan club pages littered throughout. One can’t forget the three ever-entertaining storytellers: The Crypt-Keeper, The Old Witch and The Vault-Dweller. They provide some light-hearted and humorous banter filled with sarcasm and jest. At the beginning of this volume is an informative introduction, written by Grant Geissman, that outlines the history of EC Comics, right through to their rise and fall from the industry. There is also an entertaining forward by the film director, Joe Dante, who talks about his love of comics and how the stories from Tales from the Crypt impacted him as a young boy. One thing that is unfortunate about this new high-quality format is the fact that the original work by the colourist Marie Severin has been completely redone. It’s a shame that we don’t get to see these comics in their original colours and instead see them looking highly edited and polished…very unlike the way that they originally appeared. 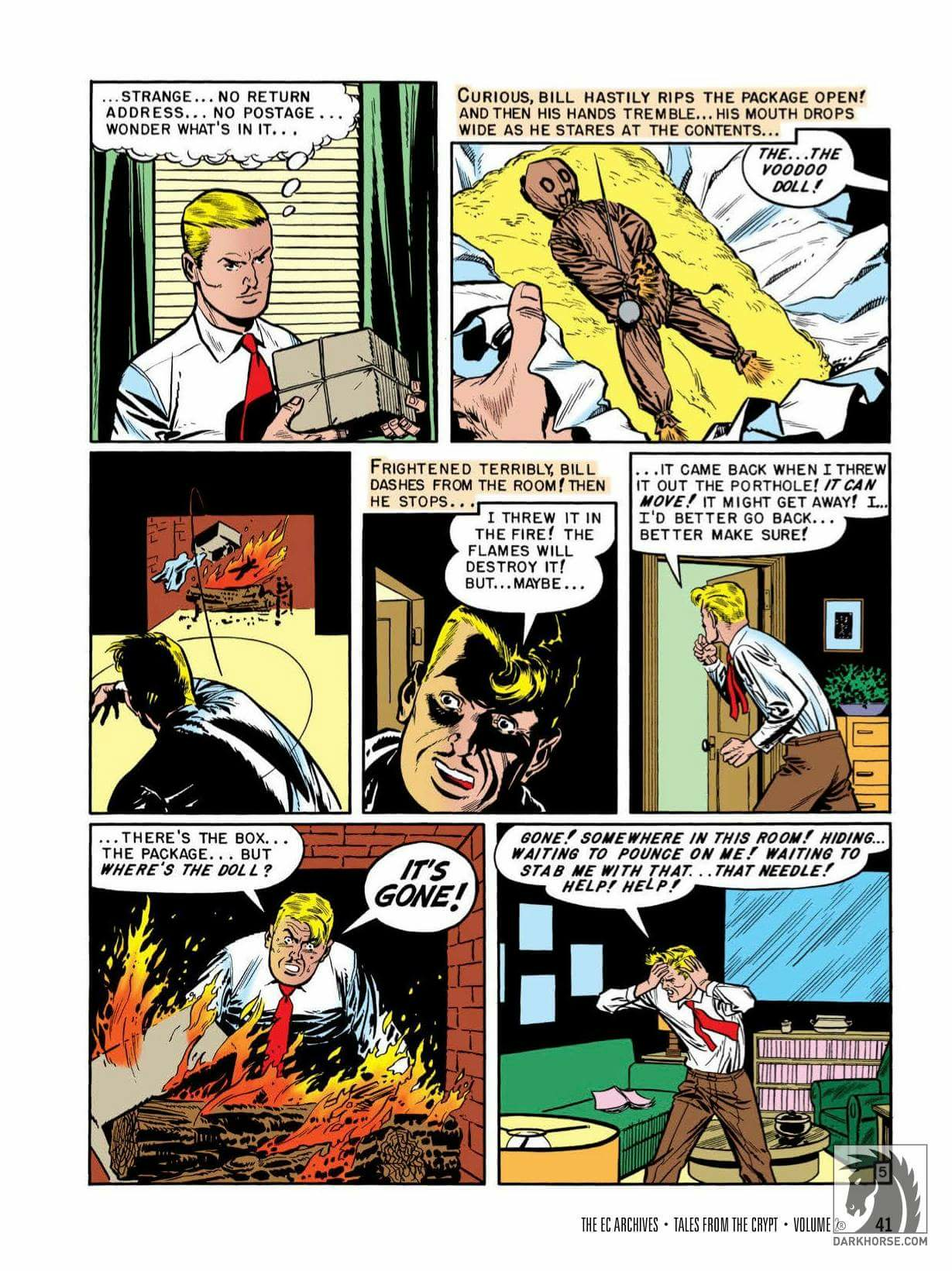 Tales from the Crypt Volume 2 is an excellent collection of classic horror stories with thrilling themes, jammed packed with drama, gripping adventures and tales of the weird and wonderful. This is a special, archived collection of some of the greatest horror comics of the twentieth century and it’s just lovely to see them in all their glory. I honestly believe that loyal EC fans will relish reliving their childhood memories and also the new generation of EC fans will love and embrace these wonderful stories by such legendary artists and writers. It goes without saying that any fan of comics or the horror genre should not hesitate to pick themselves up a copy.