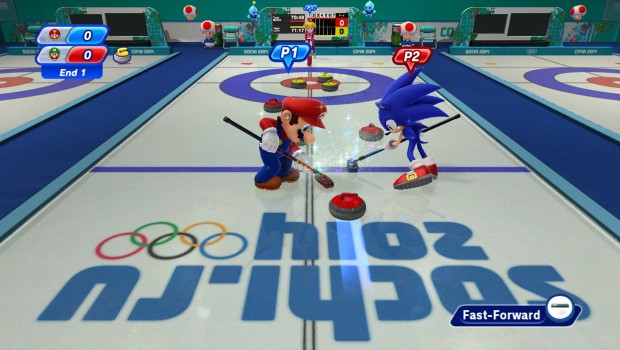 18th October 2013 – Whether you are a winter sports enthusiast or don’t know your Skeleton from your Bobsleigh, get ready to go for glory when Mario & Sonic at the Sochi 2014 Olympic Winter Games launches in Australia and New Zealand on Wii U on 9th November. Featuring 16 different Olympic Events and 8 Dream Events set in the worlds of Mario and Sonic, join your favourite characters for fun-filled competition in individual and team events, new game modes such as Legends Showdown and the Action & Answer Tour, as well as a new online competition mode, Worldwide VS.

Also for the first time in the series, the Wii U GamePad and Wii Remote Plus controllers are used to control the action, offering the player greater depth of control and more intuitive gameplay. In Figure Skating Pairs, link up with a friend by holding the same Wii Remote Plus controller and perform graceful moves while two of the legendary characters on-screen perform the same routine. Only with perfect timing and by synching up effectively with your partner will you succeed. In an event like Curling, use the Wii U GamePad touch screen to plan your strategy by deciding upon the path of each stone, before releasing the stone onto the rink by flicking the Wii Remote Plus. If you are the player at the end with stones closest to the centre of the circle, victory is yours!

Alongside the Olympic Events, the Dream Events featured in the game allow players to perform dynamic moves not possible in real life. In the adrenaline-fuelled Winter Sports Champion Race, prepare to hop from a pair of skis onto a snowboard, from the inside of a bobsleigh to a pair of skates, in an environment befitting of the diverse blend of winter sports packed into this single event. For an alternative take on a winter sport, Snowball Scrimmage allows you to take part in the ultimate snowball fight, while in Snow Day Street Hockey, you’ll experience the sport of Ice Hockey like you’ve never seen before!

Away from the individual events, the Legends Showdown mode is designed for those who want to experience the deeper Mario & Sonic world. In this mode, 20 characters join forces to compete in an ultimate showdown, and it’s down to you to strategise and select which character will be put forward for each event. Come out on top in each of the five areas and defeat their respective Bosses to aim for the coveted Legend Trophy, earning different rewards as you complete areas. Meanwhile, an all-new party mode set up for multiplayer fun is the Action & Answer Tour, which is presented in the style of a TV quiz program and allows up to four players to compete against each other in minigames based on Olympic events. With the pressure on, you will need a mixture of quick reactions and observational skills to earn points and overcome your opponents – whoever has the most total points at the end wins!

Finally, a new online mode for the Mario & Sonic series, Worldwide VS, enables you  to face off against players from across the globe in four events – Freestyle Ski Cross, Snowboard Cross, Short Track 1000m (Speed Skating), and the aforementioned Dream Event, Winter Sports Champion Race. Whether your opponent is a friend or a fellow competitor on the other side of the world, every time you earn a medal in competition, you’ll in turn earn points for your home nation, so give it your all and help propel your country to the top of the rankings.

Two of gaming’s biggest headliners come face to face once again when Mario & Sonic at the Sochi 2014 Olympic Winter Games launches on Wii U on 9th November. With members of both the Mushroom Kingdom and Sonic Universe competing in 16 Olympic Events and 8 Dream Events, plus a variety of new game modes including Worldwide VS, which character will you choose to play as in the quest for glory?