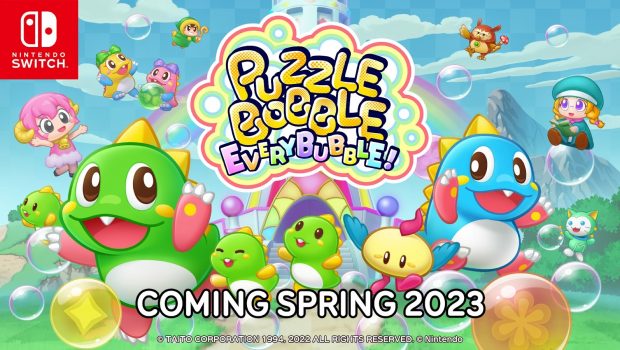 ININ Games together with TAITO Corporation is proud to announce that Puzzle Bobble Everybubble! is coming in Spring 2023, exclusively for Nintendo Switch! The game that started it all comes back to you for another adventure with new enhanced features, which will be announced soon.

Only one we couldn’t wait to share with you: for the very first time in the history of the franchise, Puzzle Bobble Everybubble! will include a story mode playable with up to 4 players, and a 2 vs. 2 co-op battle mode.

The game will be published by ININ and can already be pre-ordered at certain retailers around the world: an ever-growing list of all participating retailers can be found at Iningames.com.

For nostalgic fans of this timeless franchise, ININ decided to make the original SNES version of Puzzle Bobble (Japanese) and Bust-A-Move (US) also available separately for download, so that even those who purchased the retail edition have the chance to relive these endless gems.

In the versus mode, players can play against either the computer or other players, and even send bubbles to their opponent’s board and disturb them by erasing or tearing off a large number of bubbles at once.

In this title, players can enjoy not only the traditional 1 vs. 1 battle but also, for the first time in the series, 2 vs. 2 cooperative battles between teams of two players, who can cooperate to erase each others awkward-to-aim-at bubbles and enjoy a more thrilling and faster-paced experience. Players can also play alone against the computer team, or team up with a friend to battle.

If you want to have a sneak peak of what this new feature looks like, check out TAITO’s  newly released video, featuring a two vs two co-op battle between the game’s developers and Bub, the game’s main character, and the newest Puzzle Bobble Everybubble! trailer (English subtitles available on YouTube).