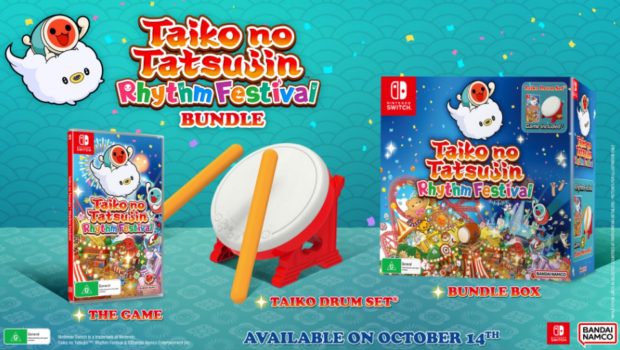 Taiko no Tatsujin Rhythm Festival will be released on October 14th, pre-order now

Taiko no Tatsujin Rhythm Festival, the brand new game in the Taiko no Tatsujin franchise will arrive on Nintendo Switch on October 14th. Pre-orders for the game are now open with 2 editions available:

A Digital Deluxe edition will be available later that will contain the Standard edition with a 90-days access to the Taiko Music Pass.

Players will be able to hone their drumming skills through the 76 songs that will be available in the game. In addition to these songs that will be available in the Taiko mode, the Story mode will take them on a journey to become a Drum Master along with DON-Chan and Kumo-Kyun. Players will also be able to showcase their skills in online battles, or collaborate with friends in the Party Mode. “Don Coins” will be earned through the different modes and allow for players to get items such as costumes or nameplates to personalize their appearance.

The Taiko no Tatsujin franchise, which started in 2001, has seen countless titles and songs in the over 20 years long history of the rhythm game franchise. Taiko no Tatsujin Rhythm Festival will be the first title to offer the Taiko Music Pass along with a 7-days free access. By subscribing to the Taiko Music Pass players will have access to a catalog of more than 500 songs with monthly updates adding new songs. More details are available on the official website.

Players with save data from Taiko no Tatsujin: Drum ‘n’ Fun will receive 3 bonus songs as well as some customization items.

On top of this, episodes of Taiko no Tatsujin: The Anime, are now available on Youtube. The anime series follows Kotaro and his friends in their quest to become Taiko masters, with the help of DON-Chan and other characters from the Taiko no Tatsujin franchise.