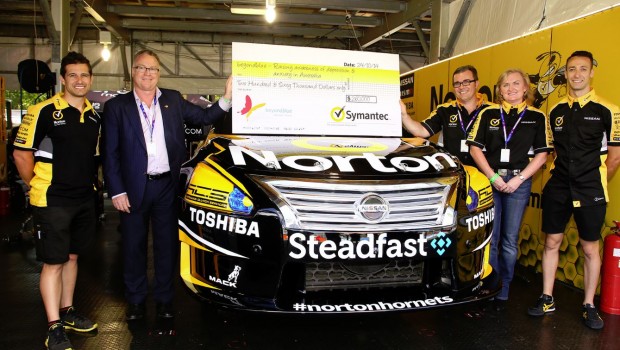 Symantec’s managing director and vice president for the Pacific region, Brenton Smith, said, “Technology has provided a whole new platform for bullies and their torments are no longer limited to schoolyards or street corners. Cyberbullying affects people of all ages, but is especially problematic for school-age children who are now faced with bullying anywhere and anytime – at home, school or even when they are on the go.”

“Most children do not report cyberbullying incidents when they occur and parents have limited knowledge of how to help their children become resilient against cyberbullying.  We want to educate children and parents about what they can do to reduce the impact of cyberbullying and we hope our donation to beyondblue will go some way to help break the connection between cyberbullying, depression and suicide,” added Smith.

Georgie Harman, CEO, beyondblue, said:  “Symantec has this year again provided the largest corporate donation from the private sector to beyondblue. This money will help us tackle cyberbullying and is important because we are seeing an evidence based connection between cyberbullying and suicide.

“Cyberbullying, like any form of bullying or discrimination, can lead to enormous stress, which in turn can lead to depression, anxiety and suicide if it continues over time. beyondblue wants to make Australian children more resilient to cyberbullying and to achieve this we have developed online content and a fact sheet for young people. These are available at www.youthbeyondblue.com and will help build young people’s resilience and reduce cyberbullying’s impact. Given cyberbullying can lead to suicide, we are also developing resources in the form of a video and information guide that will equip parents with the tools and confidence to discuss these issues with their children.

“These resources will be available to Australians free of charge which would not have been possible without the continued support and generosity from the team at Symantec and Norton.”

Throughout this week, beyondblue’s big blue bus, which is currently on a 50,000km National Roadshow around Australia, will visit local schools on the Gold Coast. beyondblue staff will educate children and teenagers at the schools about cyberbullying, depression and anxiety disorders, and the support that is available to young people who are experiencing these.

Students at Aquinas College were lucky to be joined by Norton Hornet Drivers, Michael Caruso, James Moffat, Dean Fiore and Taz Douglas as part of the beyondblue big blue bus visit, where they learned about the driver’s experiences at school and the issues they deal with being a public face on social media.

Following a podium finish at Bathurst, driver James Moffat of the #360 Norton Nissan Altima was thrilled to be part of the school visit and included in the donation handover.

“It’s fantastic that Norton is able to deliver another huge donation to beyondblue and, as drivers and as a race team, we’ve been more than happy to raise awareness for such a great cause,” said James Moffat.

For the first time, the bright yellow Norton cars will support the nickname of the each driver on the sides of the vehicles as they lap the famous Gold Coast circuit.

“At the Gold Coast 600 this weekend, we’ve changed the branding on the sides of our cars, replacing Norton with our nicknames. Mateship and camaraderie are fundamental elements for beyondblue when dealing with cyberbullying, depression and anxiety, so while ‘Moff Dog’ might look odd down the side of a race car, it’s the friendship that we have within the team that helps us achieve at the highest level – both on and off the track.”

Since partnering with beyondblue in 2013, Symantec has donated a total of $560,000 to beyondblue to help fight cyberbullying and prevent depression and anxiety disorders for all Australians.