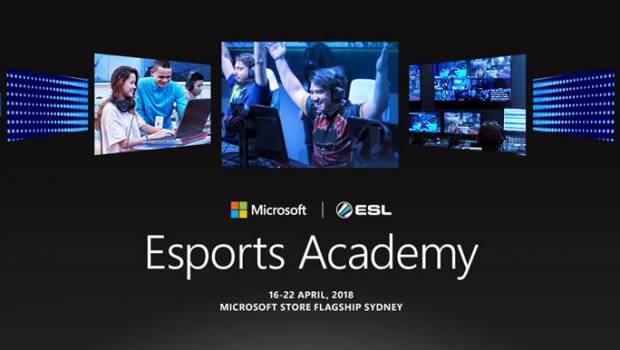 An initiative to educate and nurture future talent in the industry, the ‘Esports Academy’ will bring together a range of speakers within the community from professional players to commentators (‘shoutcasters’) to share their insights and advice; along with hands on experiences and practical tips for attendees.

Perfect for anyone that’s ever had an interest in the esports industry and wanted to know more, the academy aims to bring leading Australian esports talent from all corners together so attendees can learn from the best. Whether you’ve been playing with friends online, are a budding shoutcaster, esports player, or you’re just interested in learning more, the Esports Academy is a great way to meet other gamers, learn from some leading industry talent and have fun.

Max Ferfoglia, Gaming Community Manager at the flagship Microsoft Store in Sydney said: “We see a lot of excitement and engagement around video games at the Microsoft Store, from casual gamers to some of the players that attend our regular tournaments and competitions. This event is all about bringing the gaming community at Microsoft Store together with some of the top talent in Australia so people can learn more about esports, how to improve their game and also hear about the pathways that exist to get into the industry.”

The Esports Academy will involve both a live Q&A where attendees can learn from all corners of the industry followed by practical sessions, hands on gameplay with feedback from professional Australian esports players. Attendees will also get first-hand experience with shoutcasting, team management and understanding of the broad range of pathways and roles that exist for anyone to get into the industry. The hands on gameplay element will enable attendees to get direct tips from professional players from all sides of the industry in order to learn how to play like a pro.

“It’s great to see a retail space such as the Microsoft Store being used to engage directly with the gaming community in Australia through these workshops,” added Danny Kim, part of the business team at ESL Australia. “The esports industry in Australia continues to experience rapid growth and this partnership with Microsoft Store helps us to share some of our knowledge and experience about esports and give people a chance to get up close and personal with some of the leading talent in the industry.”

The Esports Academy is a part of Microsoft Store’s ongoing commitment to the local gaming community and forms part of broader activity, including regular events and workshops for anyone interested in gaming. The Esports Academy will also take place at the flagship Microsoft Store in New York on Saturday, April 21, and Sunday, April 22, and will include sessions from seasoned competitors in the esports, varsity and streaming space: the road to a collegiate esports scholarship; a career in professional gaming; content creation and additional revenue streams.

In addition to the Sydney event, the NYC flagship Microsoft Store will also be hosting a Esports Academy of its own. For those in New York, visit here to register for sessions taking place on Saturday, April 21, and here for Sunday, April 22, at the flagship Microsoft Store on Fifth Avenue and partake in three sessions from seasoned competitors and industry professionals in the esports, varsity and streaming areas. The team will cover the road to a collegiate esports scholarship, what a career in professional gaming looks like, and best practices for content creation and additional revenue streams.