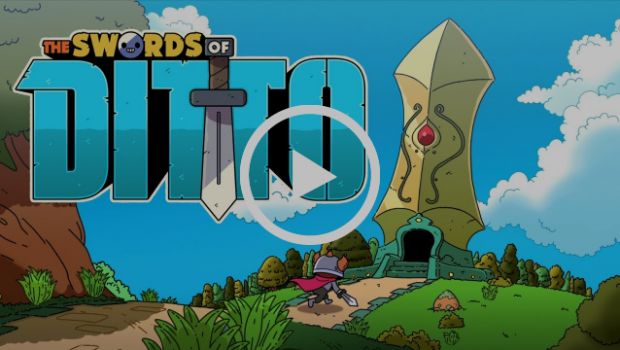 ISLAND OF DITTO – The delightful heroes at developer onebitbeyond and game label Devolver Digital have announced the charming action-adventure RPG The Swords of Ditto, coming to PlayStation 4 and PC in early 2018 [http://theswordsofditto.com].

The Swords of Ditto is a compact action RPG that creates a unique adventure for each new hero of legend in the relentless fight against the evil Mormo. Explore a delightful but dangerous overworld, brave menacing dungeons, and improve your hero in a charming village, during your quest to overcome the evil that plagues the island. Assume the role of the Sword of Ditto and grab a co-op friend for an unforgettable adventure filled with delightful characters, extraordinary loot, and heroic battles!

Players will become one of the legendary heroes of the Island of Ditto and battle through each unique legend alone or alongside cooperative companion. Each legend becomes their own as every success and failure are recorded in the tomes of Ditto and have an effect on subsequent adventures. Banish Mormo in one legend and the next generation’s heroes will find a more joyful land, fail and darkness begins to envelope the island. Heroes will also be able to find the monuments and even loot from the adventurers that came before them to take along on their crusade.

The Swords of Ditto developer onebitbeyond was created by former creative director at Curve Studios Jonathan ‘Bidds’ Biddle and boasts a roster of top game development veterans thrilled to work on their first project together. Based out of London, onebitbeyond have been working on The Swords of Ditto since late 2015 and will be presenting the game for the first time at Devolver Digital’s Indie Picnic at E3.

The Swords of Ditto full gameplay debut will take place live on Twitch Monday, June 12 at 5:00PM Pacific at twitch.tv/twitch. E3 media and industry attendees can get their hands on The Swords of Ditto at Devolver Digital’s annual Indie Picnic, in a pretty wild parking lot scene June 13 – 15.