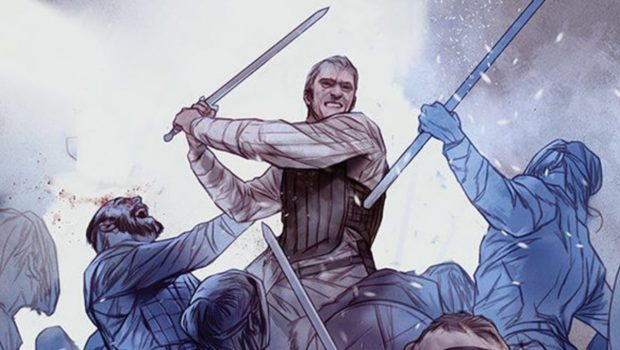 Summary: A heartbreaking farewell and a moving reunion.

High up in the mountains and with nowhere to flee, Dag and Elsbeth face the Forty Swords one last time.

The issue begins with Dag and Elsbeth sheltering from the harsh snow in a cave, high up in the mountains. Dag is urging Elsbeth to speak again, wishing to hear her voice, however, Elsbeth remains silent and unwilling to comply. Dag then begins to talk about their swords and how the cold weather makes the steel brittle. One good strike and the blade will shatter he warns, almost like he is foretelling what is to come. It is time to leave, and moments after departing the cave, a member of the Forty Swords appears like a ghostly figure walking out from the blinding white snow. The ambush begins and with nothing else to do and nowhere to run, Dag and Elsbeth stand side by side, swords drawn to face the evil that has haunted them for over ten years.

Unfolding parallel to this, is the story is Elsbeth as an older woman, seeking revenge against the people who wronged her as a child. She slaughters her way to the Rus Guardhouse, where she stages a brazen attack against the fortified building. Trapping the men inside, she fires a flaming arrow at the guardhouse, igniting the building and engulfing it in flames. With the men killed and defeated, Elsbeth enters the guardhouse, searching for the man she’s been wishing to liberate for years. This moving and tragic reunion sheds light on Dag’s past and the path that he was forced to take.

So, we are here at the final chapter of the first arc, and I couldn’t think of a better way to end than having a few epic sword fights. There isn’t a whole lot of dialogue in this issue, but the small exchanges that we do see are affecting and highly emotive. Brian Wood captures the emotional hardships of Elsbeth effortlessly, evoking a sense of loss and pathos. We have seen Elsbeth grow over this first arc, and are now at a point where we can visibly see her bond and connection to her father. Their relationship has been a prickly affair, filled with various challenges and communication barriers, however, we now see the veil lifted, revealing a girl who will do anything to free her father from his horrible fate. Quite powerful, and really lovely to see all the elements of the story come together to form a moving and cohesive narrative.

This issue really amps up the action, with a lot of epic sword swinging and slashing. It’s weirdly hypnotic to look at. I really love how Mack Chater uses the snow to almost wash out the surrounding landscape, making it appear stark and featureless. This allows for the sword fight between Dag and the Forty Swords to fully dominate the page, as your eye is completely drawn to the action with no other distractions fighting for your attention. And, like I mentioned earlier, the fight sequences are truly beautiful to look at. These are big, sweeping visual moments, delivering an almost theatrical performance, like some kind of lethal dance. Many of these scenes are also quite violent and graphic to look at, especially during Elsbeth’s adult storyline, as she hacks and slashes her way through an entire guardhouse of men. The colouring by Jose Villarrubia perfectly reflects the bleakness of the snow-covered setting, with stark whites and muted colours. During the fighting, we see splashes of vibrant colour across the page, which is quite eye-catching and has a graphic and striking quality.

Overall, I thought that this was a powerful ending to the first arc. I’ve really enjoyed the developments that we’ve seen throughout Sword Daughter, especially the relationship between Dag and Elsbeth. This is a beautifully drawn comic with a poignant and powerful story. A truly unique Viking revenge saga that I highly recommend. 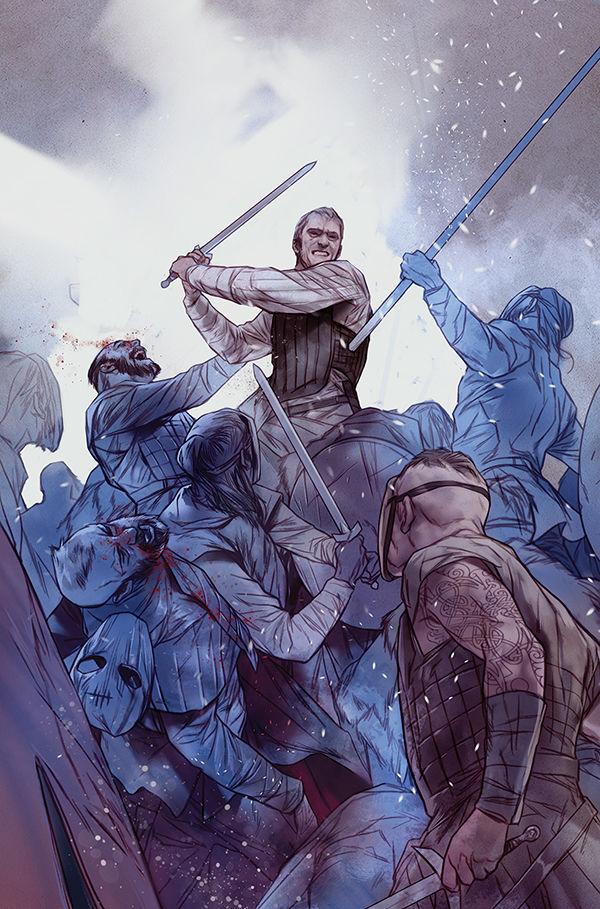