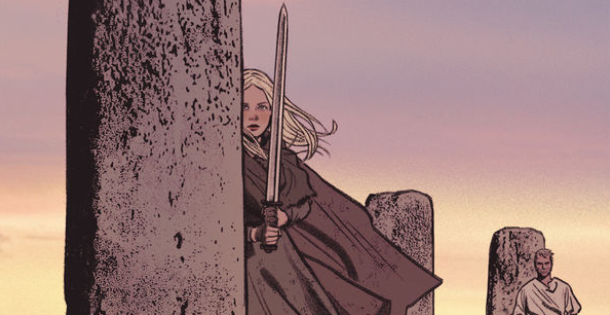 Summary: Dag comes face-to-face with the first of the Forty Swords.

At the ancient stone circle known as Raven’s Fate, Dag comes face-to-face with the first of the Forty Swords. Meanwhile another compelling layer to this tale unfolds, as we learn more about Elsbeth and what the future holds for her.

This issue begins in Orkney, where we see Elsbeth meeting with a member of the Forty Swords to find out the location of where her father is to meet him. Callous and cruel, the man taunts and teases her about the raid that killed her family, reminding her of Dag’s abandonment and lack of protection during a time when she needed him the most. At sunrise the following day they meet, ready to face one another with nothing more than their swords. A harrowing fight ensues, with one man strong and young who is there to defend himself, whilst the other is slow and old but fighting for vengeance. Throughout this unfolding battle we see flashes of Elsbeth as a woman facing her own personal battle as she encounters those who have wronged and mistreated her. Another layer to this story unravels, revealing a much more complex tale, and a curious new twist.

This is a faster-paced issue, focusing on Dag’s intense encounter with the Forty Swords warrior, juxtaposed alongside flashes of Elsbeth’s future. I found it to be an interesting contrast, with the main narrative being interrupted by these thoughts of a character who has so far remained voiceless. These fragmented glimpses into Elsbeth’s future shed some light on events that have yet to unfold and alludes to a personal conflict that we can only guess at. Images, like small clues are presented to us in a jarring fashion, showing the lead up to and aftermath of a terrible and tragic bloodbath. One can’t help but wonder what events pushed Elsbeth to do what she does in the future, and why she is emotionless. This is a character who has clearly been through some trauma throughout her life and we are seeing the trigger that pushes her over the edge. I’m very intrigued by this and I’m keen to know more about how she gets to this point.

The fight sequence at Raven’s Fate is visually gorgeous and the sense of movement that Mack Chater captures is reminiscent of the fluidity and finesse that we see in classic samurai films. Going into this story, I was fully aware of the visual inspiration that samurai cinema has had on this series, however, this particular fight really stood out to me for this reason alone. I found it to be both beautiful and brutal and I enjoyed the way that it flowed alongside Elsbeth’s story. There is also a gorgeous single page panel where we see Dag and Elsbeth embrace in a beautiful and highly-emotional way. To me, this single image reflects the strong bond that is growing between them, reminding us that they do in fact care and love one another. The colouring by Jose Villarubia is delicate and very subtle, reflecting the bleakness of the landscape. During Elsbeth’s story it intensifies and becomes more vibrant and dramatic, which I find helps to heighten the tonal shift in the narrative.

Overall, I thought that this was a highly-compelling and poignant chapter in this story. It’s fast-paced, with a lot of interesting developments unfolding, which brings a whole new dynamic and layer to this tale. I’m interested to see how things will progress from this point and I only hope that it continues to gain momentum after this first Forty Swords encounter. 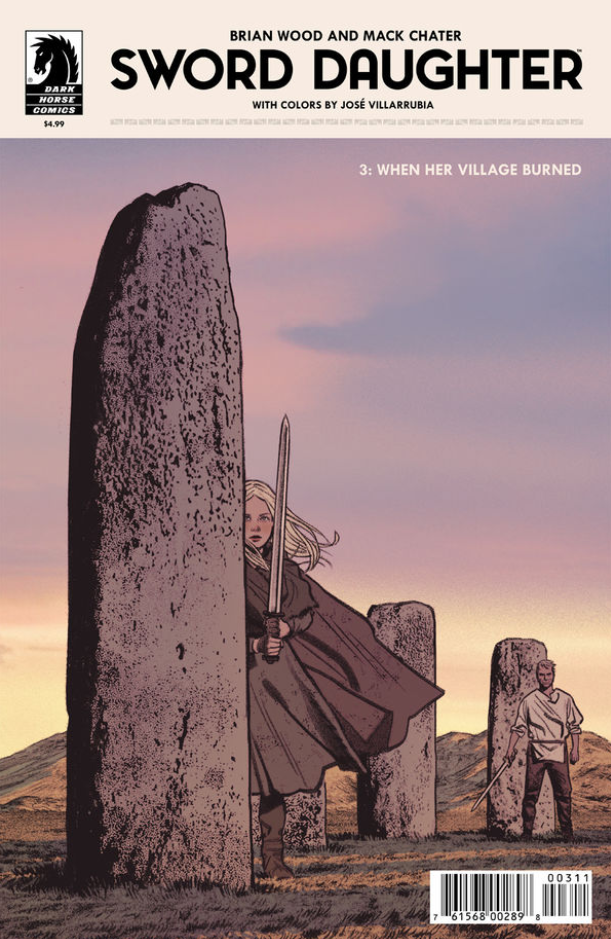