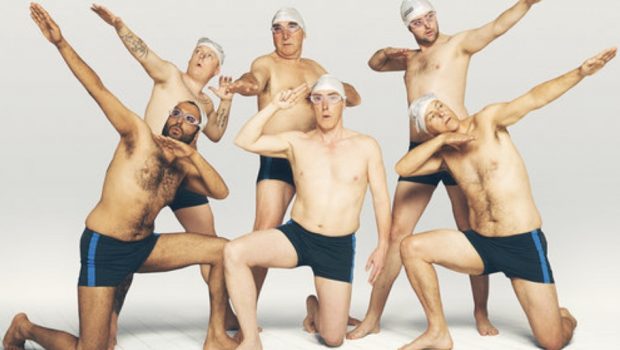 Male casts exploring their emotions is a rarity in modern cinema. The crew of Ocean’s Eleven (2001) did not bond over their failed marriages while they struggled to pay the bills. Similarly, the men in The Usual Suspects (1995) did not jump in a pool to solve their differences. Uniquely, the strength and the beating heart of the British comedy Swimming with Men is that it is unafraid to show fractured males with real problems. However, despite underlining the internal struggles of men, young and old, the result is still fraught with soggy and uninvolved characters who lack emotional foresight.

Swimming uses real life events as inspiration to unite a disparate group of middle-aged men. In true underdog fashion, they band together to compete in the World Championships of synchronised swimming. Their problems and personalities clash as they splash about in their united bond to achieve their harmonic dream. They discover that life is equally as hard outside of the water. Consequently, they must overcome their fears and doubts to understand that our world, like synchronised swimming, is best viewed when it is upside down.

The film’s main character, Eric Scott (Rob Brydon), is losing his grip on life. His accounting job is a monotonous drone and at home he is growing apart from his wife, Heather (Jane Horrocks), and teenage son. Eric winds down from work by spending time at the local pool. He then returns home and is confronted by the sight of Heather in deep discussion with her tall, dark and handsome colleague (The Audience’s Nathaniel Parker).

For Eric, the shock of this and the growing estrangement from his modern minded teenage son directs the troubled businessman to the most obvious of English places: the pub. After drowning his sorrows and beliefs of personal misfortune, Eric returns home and intensifies the situation. A fight with Heather over her supposed marital indifference leads to him storming out in a dramatic and drunken mess and leaving his family behind. 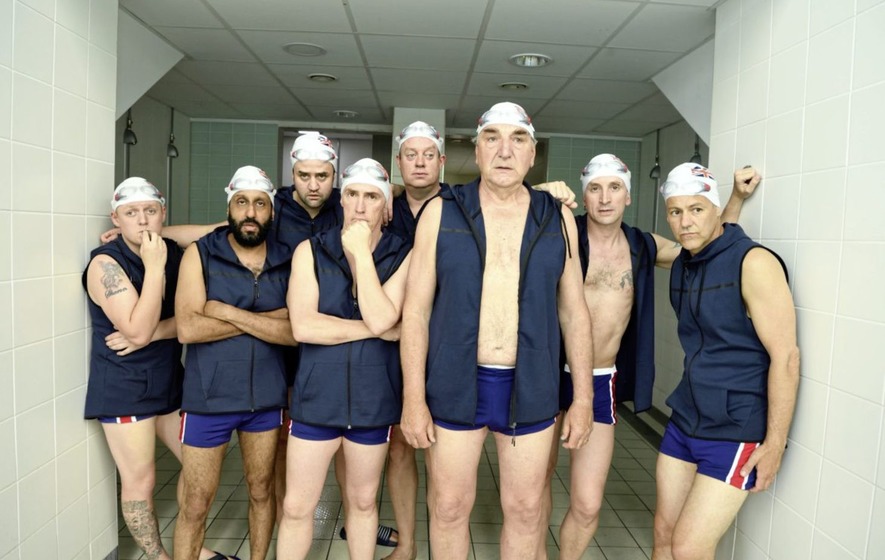 During a trip to the local pool, Eric offers the synchronised swim team some mathematical advice to help them with their routine. With this helpful gesture, he is offered a spot on the team. His kindness also results in a newfound purpose and passion. In his daily underwater training, the frustrated accountant discovers a group of men with their own fears and emotional walls built over life-worn decades of stunted routine. With his focus now lying outside of his humdrum existence, Eric embarks on a new journey of self-discovery while undertaking synchronised swimming with men.

Rob Brydon’s maturity and comedic talents make him an easy choice for the character of Eric. Despite being restrained from the opening credits, Brydon’s uphill battle is convincing us that Eric is not terribly self‑involved. A protagonist needs conflict and obstacles for their emotional arc, but Eric’s lone problem is that he merely suffers from boredom. His routine twists him into an untrusting, disillusioned husband and father. While boredom as a dangerous character attribute can be a compelling subject to explore, Eric himself isn’t dangerous. He is simply an accountant whose predictable struggles are not unique to upper and middle-class finance workers. 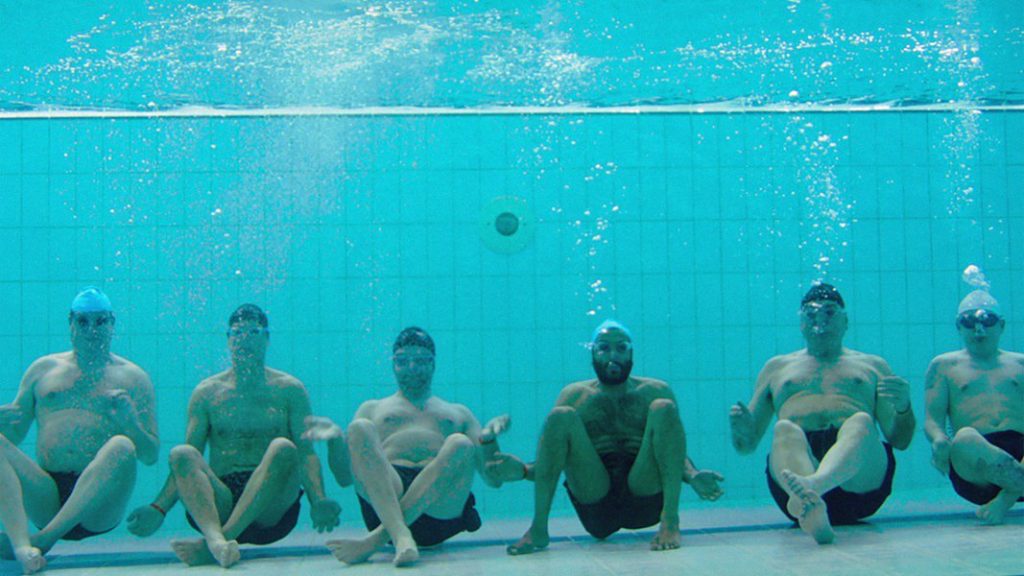 Heather is loving, loyal, and, unsurprisingly, dismayed by Eric’s unfounded selfish behavior. When she spends time with another man, it sends Eric into a childish jealous fit. His relationship with his son is only mildly strained but far from unworkable or without love. Any teenager needs normality from their parents during their growing years. Eric’s solution is to leave Heather in a drunken fit while completely ignoring his son as he storms off into the night, not unlike a belligerent child running away from home. While Brydon appropriately conveys the disillusion that is emotionally crippling Eric, the problems of Eric and the film itself are deeper than the lead performance.

The support cast, including Thomas Turgoose (This is England, 2006), Adeel Akatar (Four Lions, 2010) and Daniel Mays (The Infiltrator, 2016), barely enriches the film. Watching this capable cast chew on the cardboard script gives the constant feeling as if something is only just about to happen. The unrewarding experience lends itself to a script desperately needing levity. Instead, the characters become burdened with the emotional strength of overly sheltered adolescents.

Peak Blinders’ Charlotte Riley plays Susan who inexplicably agrees to coach the men’s team for the international competition. The actress provides a welcome change from all the pasty male dive-bombing. Yet she is underused and then unforgivably shoehorned into the year’s most forgettable and unnecessary romance. The other drastically underwritten women, including Jane Horrock’s character, only exist so that the men can impose their fears and desires onto them. It hurts everyone involved and audiences should expect more when dealing with female characters.

While it deserves praise for attempting to explore male emotions, the generic script by Aschlin Ditta fails on both sides of the sexes by minimising real world issues. Too many scenes end on a whimper and do not feature enough laughs for the cast or the audience. The material is light on drama but happily leaves enough space to park a freight train between memorable jokes. One character, humorlessly named Silent Bob (Chris Jepson), has no dialogue and offers no insights or reasons. It is a single joke that fails to land, which also describes the entire script. 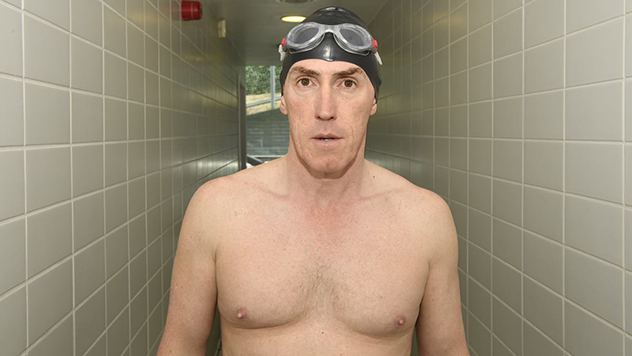 The input of director Oliver Parker (An Ideal Husband, 1999) feels absent and leaves scenes feeling like a dry run rehearsal. Some adlibbing from the talented cast could have energised the forgettable script and the dim character outlines. While this freedom may have been afforded during production, it has not been effectively realised. Jarring editing also embellishes nothing but the film’s blandness and lack of care. For example, the finale resembles a low-budget, geriatric knock-off of Cool Runnings (1993). Before concluding, we are throttled by an end scene so forced and out-of-touch that it will give you a higher appreciation for the annual free-to-air ham fests of The Full Monty (1997) and Love Actually (2003).

The British are renowned for their sophisticated comedy and the experienced cast assembled here are capable players. These factors should have given Swimming with Men the potential to grow beyond the sum of its parts. Yet given the derivative form of the script and Brydon’s unsympathetic main character, more polish and care were needed behind the camera to modernise the story and sharpen the humour. Instead, it is a lazy copy-and-paste relic from the pits of the past.

Summary: Despite underlining the internal struggles of men, young and old, the result is still fraught with soggy and uninvolved characters who lack emotional foresight.