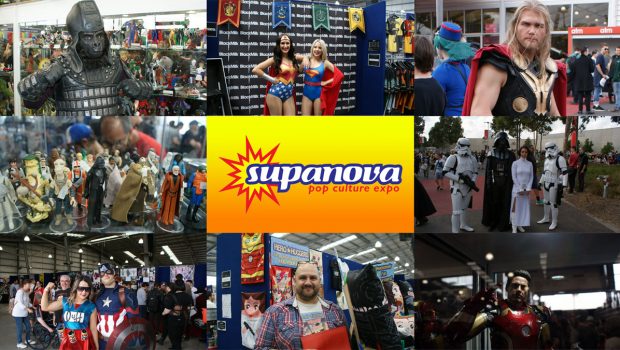 The holidays are coming early this year, Supa-Fans! Get ready for “sweet Christmas” in November, as Supanova Comic Con & Gaming reveal their first wave of celebrity guests for Brisbane (5-6 November) and Adelaide (12-13 November), led by Marvel Supa-Star Mike Colter!

Best known for his award-nominated role as Luke Cage, established in Jessica Jones and reprised in both The Defenders and his own titular series, Colter quickly became a fan-favourite for his portrayal of Harlem’s unbreakable hero. Since then, he has gone on to star in the Paramount+ Original series, Evil, and is otherwise known for such titles as Halo: Nightfall and American Horror Story.

From across the pond – or should we say River? – Supanova alumna Alex Kingston will also attend, marking her first appearance with the convention since 2013. Whovians will recognise Kingston as The Doctor’s beloved time-travelling companion, River Song, in Doctor Who, while DC fans may know her better as Dinah Lance in the CW’s hit series, Arrow.

Run, don’t walk, to catch The Walking Dead’s very own Carl Grimes, Supa-Star Chandler Riggs, this November! Since exiting the hit AMC program after an eight-year tenure, Riggs has starred in the ABC family drama A Million Little Things and will appear at the events alongside The 100’s Eliza Taylor and Bob Morley, as well as Merlin and La Brea’s Eoin Macken, rounding out Supanova’s first wave of small screen Supa-Stars.

Lovers of big screen action will not want to miss ‘the saviour of the universe’ himself, Flash Gordon’s Sam J. Jones! Easily recognised as the titular hero of the 1980 cult classic, Jones is joined by the perhaps less immediately recognisable but nonetheless heroic Aussie actor Neil Fanning a.k.a. the voice of Scooby Doo in the 2000s film series written by James Gunn!

After delighting attendees earlier in the year, returning to the Supanova line-up are local legends John Jarratt and Lincoln Lewis. Having recently starred together in the Aussie horror production, The Possessed, the third instalment of Wolf Creek is currently in production for Jarratt, while the Logie-winning Lewis recently placed third in the 2021 All-Stars season of Dancing with the Stars.

Anime fans should be sure to catch international voice actors Elizabeth Maxwell and Jason Liebrecht, both of whom have countless credits to their names. Maxwell notably portrayed Motoko Kusanagi in the English language dub of Ghost in the Shell: Arise, while Liebrecht currently lends his voice to fan-favourite Dabi in My Hero Academia.

Leading the convention’s cavalcade of comic creators, fans will also have the opportunity to meet industry power couple, Arthur Adams and Joyce Chin. With careers spanning decades, Adams and Chin have provided cover and interior work on countless titles for Marvel and DC, and are joined by local artists Anthony Christou and Shaun Keenan, with several more expected to be announced closer to the shows.

Can’t wait to book your Supa-Weekend in Brisbane or Adelaide? Admission tickets, including General Admission, VIP and Supa-Q Passes, are scheduled to go on sale on Thursday, 18 August via Moshtix, with Autograph and Photograph Tokens to be released in the lead up to November. For all the latest event information, keep an eye on the Supanova social media channels!