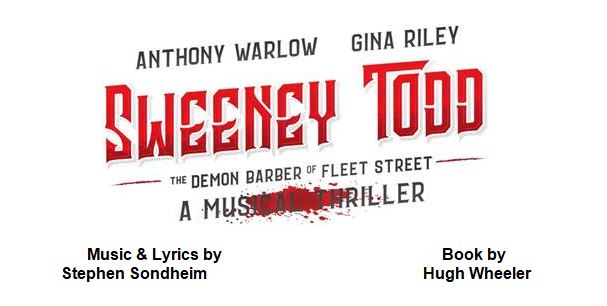 TEG Life Like Company are delighted to announce they have cast musical icon DEBRA BYRNE in the role of the Beggar Woman; one of Australia’s most diversely talented entertainers, MICHAEL FALZON as Pirelli; and celebrated international bass baritone opera star DANIEL SUMEGI as Judge Turpin, to star in this spectacular re-imagined concert version of the musical thriller SWEENEY TODD: The Demon Barber of Fleet Street.

MICHAEL FALZON most recently starred as ‘Magaldi’ alongside Tina Arena in Evita. He has further starred locally and internationally in We Will Rock You, Jesus Christ Superstar, Rock of Ages, Chess, Hedwig and the Angry Inch and played arenas across the globe in Jeff Wayne’s The War of the Worlds. Australia has seen him with his swinging super-group Swing on This; with Kate Ceberano in The Music of James Bond and blasting the hits of Queen with symphony orchestras at Sydney Opera House and Melbourne’s Hamer Hall. After recording the lead on Atomic – A New Rock Musical in New York, Falzon was invited back last year to record GET JACK – A Musical Thriller by Damien Gray and GRAMMY nominee, Kip Winger.

Alongside these luminaries of Australian stage, film and television other principal cast announced today include ANTON BEREZIN (Evita, Once, Wicked) as Beadle Bamford, GENEVIEVE KINGSFORD (A Gentleman’s Guide…, The Light in the Piazza, Brigadoon) as Johanna Barker, JONATHAN HICKEY (The Light in the Piazza, Aspects of Love) as Tobias Ragg and OWEN McCREDIE (Jersey Boys, You Will Be Found) as Anthony Hope.

SWEENEY TODD will be presented for six shows only in both Sydney and Melbourne from 13 to 23 June to celebrate the 40th anniversary of Stephen Sondheim and Hugh Wheeler’s ground-breaking musical thriller that transports audiences into the atmospheric underbelly of 19th century London.

Exiled barber Sweeney Todd will be played by quintessential leading man ANTHONY WARLOW and the incomparable GINA RILEY plays the tragi-comic role of pie-maker Mrs. Lovett. With soaring arias of vengeance and yearning, the darkly-comic SWEENEY TODD: The Demon Barber of Fleet Street combines the vocal power and sweep of opera with the aching humanity of musical theatre.

SWEENEY TODD opened on Broadway in 1979 and in London’s West End in 1980. The musical thriller, with music and lyrics by Stephen Sondheim, and book by Hugh Wheeler, has seen numerous revivals worldwide by opera and theatre companies as well as Tim Burton’s 2007 film adaptation starring Johnny Depp and Helena Bonham Carter. The story, inspired by a tale serialised in a Penny Dreadful in 1846-47, centres on the unjustly exiled barber who returns to London seeking vengeance against the lecherous judge who framed him and ravaged his young wife. The road to revenge leads to Mrs Lovett, the proprietor of a failing pie shop, above which, he opens a new barber shop. Desperate times lead Sweeney Todd to plot diabolical schemes against those who have wronged him.

The bold and imaginative new concert production by TEG Life Like Company combines stunning scenic design, exquisite lighting, beautiful costume design and the 22-piece orchestra is at the centre of the razor-sharp action. Fundamentally, this 40th anniversary production affirms the musical’s status as a star-power vehicle for resourceful, commanding performers at the top of their game.