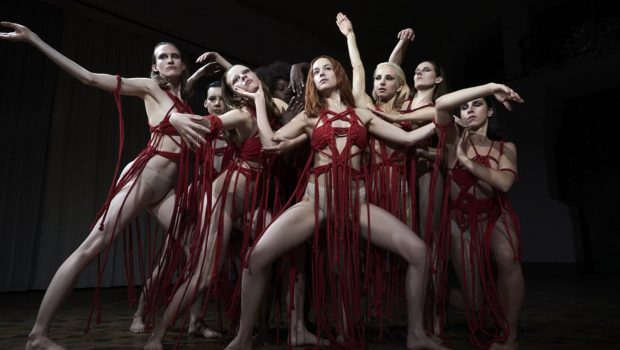 There are over 100 remakes currently being planned but few have stirred filmgoers as much as the long-awaited remake of Dario Argento’s 1977 classic horror film, Suspiria. It was the brilliantly kaleidoscopic cinematography, the out-of-this-world musical score, the outrageously portrayed violence and the rough English dubbing that gave Suspiria the edge to become one of the best slasher/occult films of all time. Some have asked how a remake would capture this lightning in a bottle again.

After years of false starts, and talents such as director David Gordon Green and actresses Natalie Portman, Isabelle Huppert, Janet McTeer and Isabelle Fuhrman falling off the project, we finally have a remake from the same team that made the wonderfully sensual comedy‑drama A Bigger Splash (2015). Suspiria is the work of director Luca Guadagnino, writer David Kajganich, editor Walter Fasano and actresses Dakota Johnson and Tilda Swinton. We also have established contributors including cinematographer Sayombhu Mukdeeprom and acclaimed musician Thom Yorke. With such a vast array of talent, the remake is not going to go down without a fight. Does the film succeed on its own terms and become a worthy remake?

Set in 1977 during post-war Berlin, young American Mennonite dancer Susie Bannion (Dakota Johnson) arrives to audition for the world-renowned Helena Markos Dance Co. When she vaults to the role of lead dancer in a meteoric fashion, the woman she replaces, Patricia Hingle (Chloe Moretz), becomes hostile and accuses the company’s female directors (consisting of Tilda Swinton, Angela Winkler, Ingrid Craven, Sylvie Testud, Renee Soutendjik, Christine LeBoutte and others) of witchcraft. Meanwhile, Josef Klemperer, who is an inquisitive psychotherapist with a tragic past, and Sara Simms (Mia Goth), a member of the dance company, uncover dark and sinister secrets as they probe the depths of the studio’s hidden underground chambers.

When one reviews a remake, is it possible to do so without talking about the original, assuming one knows about it in the first place? Absolutely not. When the remake has the same story and the same name, how can one not talk about it? However, the only similarity between Guadagnino’s Suspiria and the original is the story framework; an American dancer enrolls to an dance company and sinister events unfold. Guadagnino has said that his film is not necessarily a remake but an adaptation of what he felt when he watched the original film. Consequently, he succeeds wholeheartedly in putting his own ideas and interpretations into the new film. 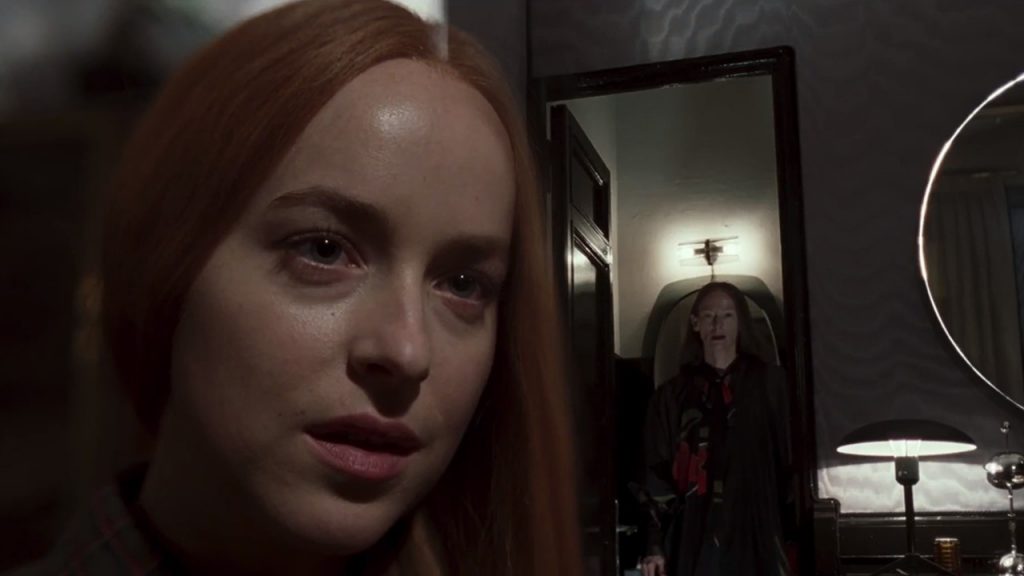 Instead of going for the simple, grandiose Grand Guignol extravagance that director Dario Argento adopted for the original, Guadagnino and writer David Kajganich are more interested in the power of themes and emotions that are prescient of the story’s setting as well as the present day. Since the story is set during the German Autumn, the German residents are in denial of indirect responsibility of World War II and since the stories about men are disparate from the stories about women, it adds to the perspectives of the characters’ actions in what they do in the story, regardless of how unpredictable their actions are.

Another factor is how the power of human emotion is embedded into the story compared to the childlike wonder of the original film. In the remake, the female characters strive to work as a single coven, which allows their dance choreography to succeed. But through their actions and mindsets, they are emotionally driven (particularly by rage when one interferes with the coven or yearning out of the life situation they are in), regardless of the bigger picture around them. To go into more detail, the witches have the power of mind-control, which gives credence to the themes, especially in the final act. 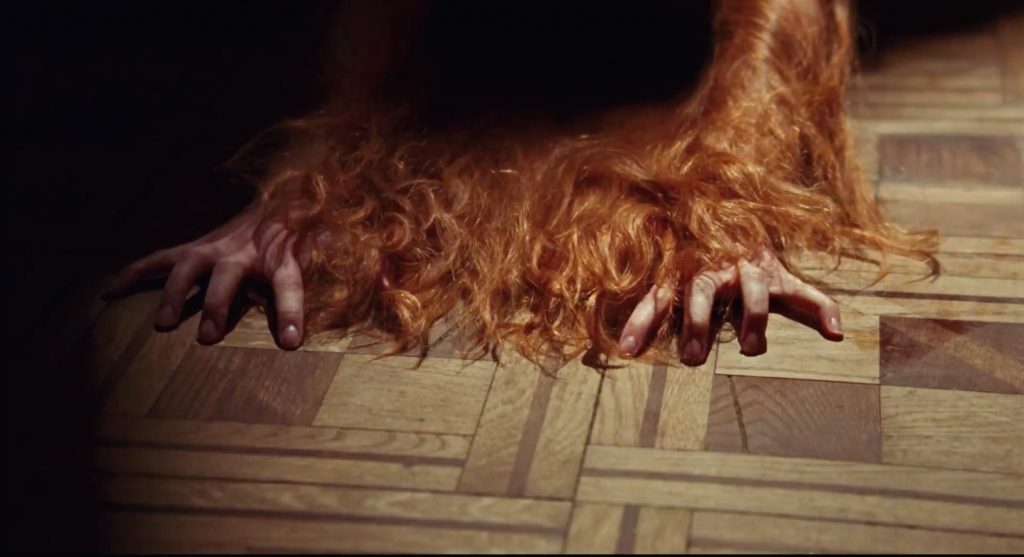 Another major facet of the remake is the use of expressionism. In the original film, the expression of mood, atmosphere and style was through extravagant, lavish colours of the cinematography. In the remake, the majority of the expressionism is shown through the elaborate and surprisingly mechanical dance choreography (by renowned dance choreographer Damien Jalet) and the incongruously off-kilter musical score by Thom Yorke, which conveys feelings of control (or lack of it, during a sequence that involves choreography of the fractured kind), characters being entranced into immersion (the character of Susie even compares it to the act of sexual intercourse) as well as blind faith (as evident in the bonkers climax).

Cinematographer Sayombhu Mukdeeprom shoots the remake to adopt the 1970s film’s muted winter aesthetic, which lends credibility to the setting of the story and a dream-like quality whenever a primary colour enters the screen, such as the colour of blood, a shadowy figure, or the movement of long cascading hair. 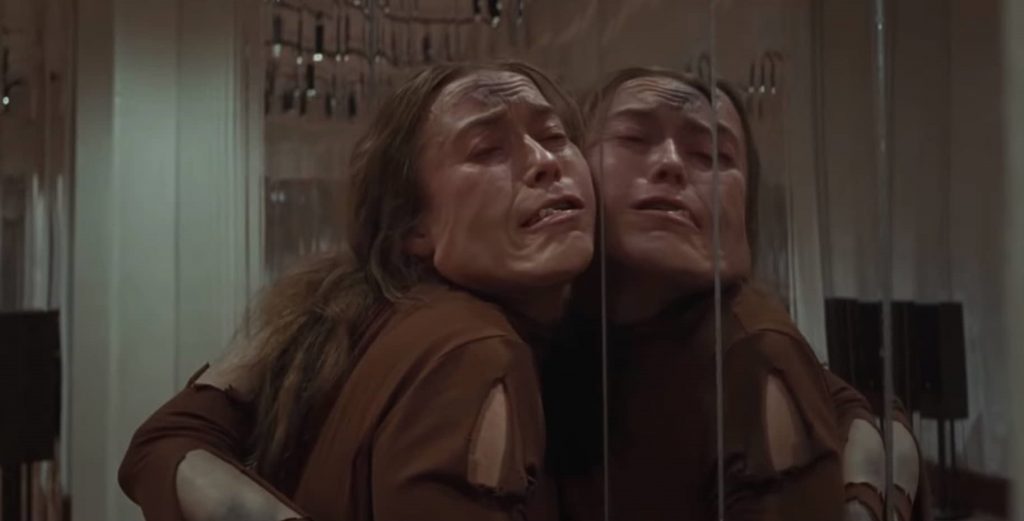 Ditto to the costume designer Giulia Piersanti, who gives the female characters costuming that is reminiscent of Japanese bondage wear (with streams of red), and is symbolic of women proudly wearing their turmoils (red akin to blood of the events of story’s backdrop), in contrast to the male characters (precisely psychoanalyst Klemperer and minor characters) who wash or put their turmoils behind them in the case of logic and fact.

Credit should also go to the performances from the cast, since they all lend good support to Guadagnino’s singular vision. Dakota Johnson gives a good performance as Susie Bannion, conveying grace and commitment to the part during the dance choreography and the dramatic character arc, where she transitions from doe-eyed to entranced and finally steadfast in her position. In her dual roles, Tilda Swinton is surprisingly restrained and yet somehow alluring in her presence, while Chloe Moretz makes the most out of her small part, as she conveys understated paranoia quite well; Mia Goth exudes such a sunny disposition to her character that she becomes incredibly relatable. 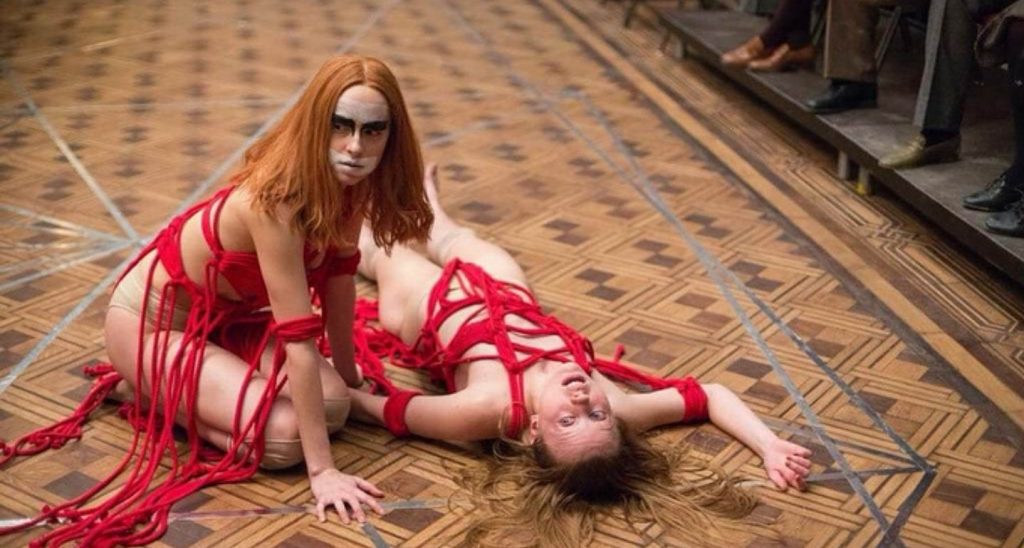 Speaking of audience relation, the storytelling, the contemplative pacing (thanks to editor Walter Fasano) and thematic power can be very alienating for audiences due to how unfathomable, esoteric and self-serious it is. For fans of the original, it can make the remake tedious for those who are just looking for genre thrills, which are ample in the original film. That is not to say that the remake doesn’t have the requisite horror tricks or moments of fun, it clearly does. But it is not executed in the way that an average viewer would think.

There are many moments where the film’s macabre gallows humour hits the mark due to the timing in it presented and how outrageous it is in contrast to the story’s serious tone. One example is how the witches use their mind-control powers on the men, which drew gasps and laughter from yours truly. There is also humour in the dialogue, such as Susie comparing dancing to sexual intercourse of the lesser known kind. 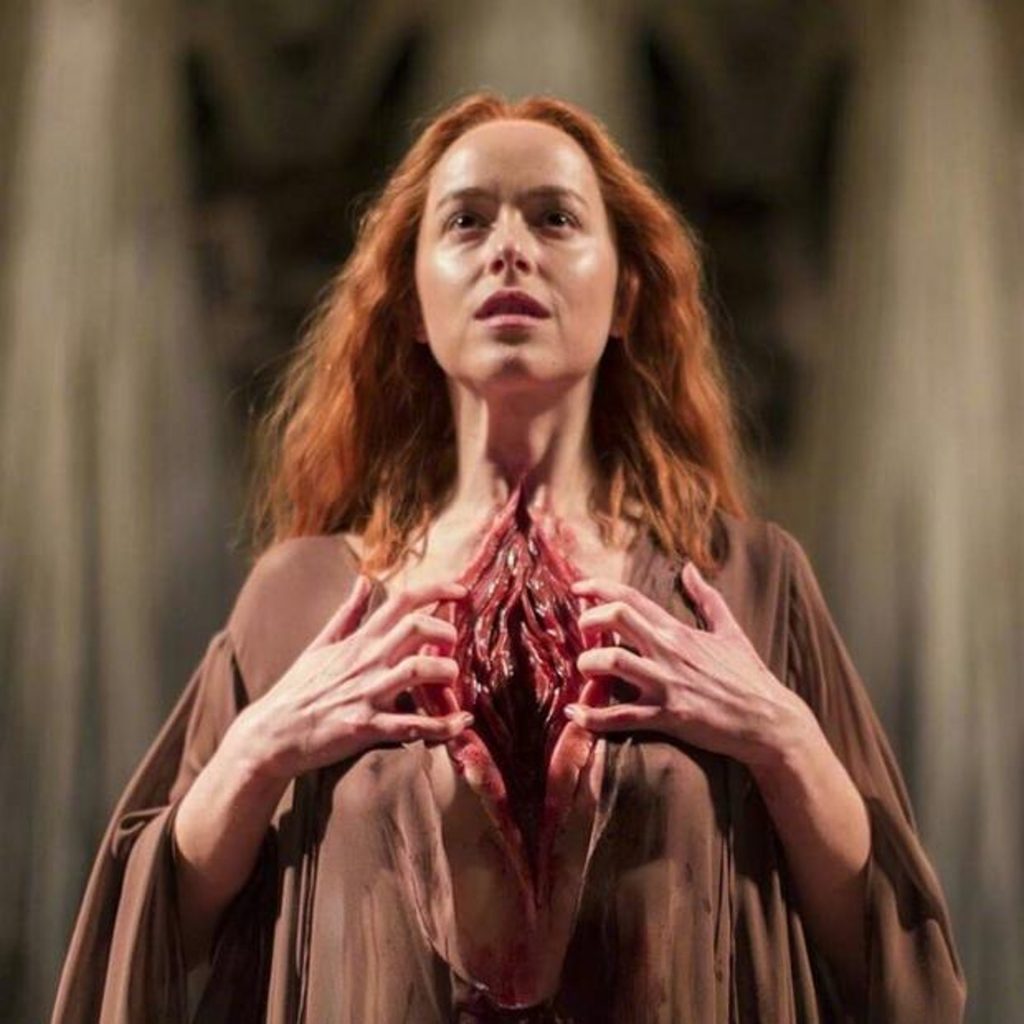 The film has all the arterial blood sprays, body horror, disembowelling, anatomy explosions that ‘gorehounds’ can savour. What makes them powerful is not well-defined characterisations that make the audience care about the characters or just the stellar production values, but the horror tropes are all grounded in what the female characters are trying to express, which are inherently red. For example, in the bonkers climax, the way the characters act and the settings are all bathed in red. At face value, it can be seen as blood, but for the characters, it is a metaphor for sensuality or a horrifying mix of love and anger since a pivotal character shows sympathy to others during an occurrence of brutal violence.

This reviewer is still in utter shock and awe over this film. It is unfathomable as it is uncompromising; it is ambitious as it is audacious; it is overwrought as it is darkly amusing, and it is gory as it is expressionistic. It could throw you into the entire gamut of emotions on a massive scale or it could leave you scaling up the cinema steps due to sheer boredom. Either way, there really isn’t a remake like this out there. For that alone, Suspiria is to be applauded.

Summary: It could throw you into the entire gamut of emotions on a massive scale or it could leave you scaling up the cinema steps due to sheer boredom. Either way, there really isn't a remake like this out there. For that alone, Suspiria is to be applauded.