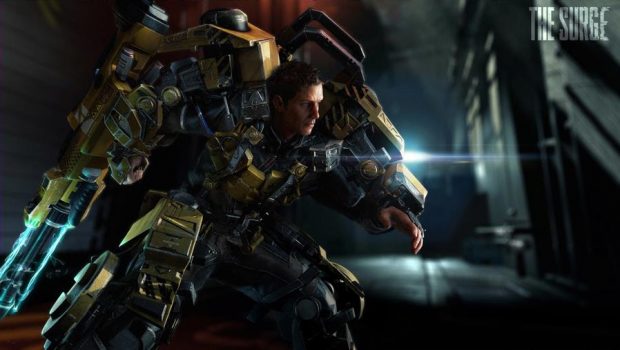 Summary: The Surge is a whirlwind of action-RPG fun with a fast and frantic melee-focused combat system, addictive loot systems and an immersive sci-fi horror atmosphere.

Exoskeletons, dismemberment and robots – if those things along with Dark Souls-esque action-RPG gameplay make up your type of video game, The Surge serves it up in spades. With an immersive and often underutilised backdrop of a sci-fi horror setting and a large emphasis on mechanised melee combat, The Surge carves its own unique brand of fun in a growing video game sub-genre no longer considered niche – hardcore ‘no hand-holding’ gaming is cool again, didn’t you hear?

The Surge has a basic story and a setting, but leaves the player to pick up most of the clues via extensive environmental exploration. Taking place in the far end of the 21st century, mankind has destroyed the planet with climate change and a mega corporation known as CERO has stepped up to fix it. Grafting mechanical exoskeletons to human workers in addition to deploying advanced robot technology – all to aid in the reconstruction of Earth – CERO presents itself as a forward-thinking company looking out for people and the planet in their promotional videos. 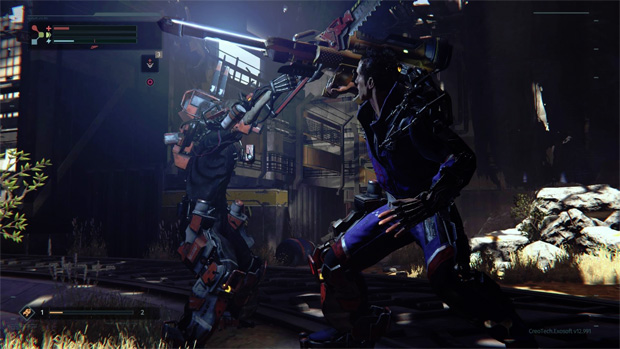 Of course, things are never as they seem. Players take the role of Warren, a wheelchair bound man who visits CERO to volunteer his services as worker in what we assume is in return for being fitted with an exoskeleton so he can walk again (we are never told though, as the game keeps most background details ambiguous). Things go predictably haywire when Warren wakes up from the painful melding procedure in a junkyard about to be executed by hostile robots, and it’s here The Surge abruptly begins – throwing players straight into the deep-end with minimal hand-holding (there are helpful, concise tutorial hints cleverly placed around the first level’s environment’s).

As someone who is a big fan of the Dark Souls series and Bloodborne, I found The Surge’s minimalist approach to storytelling and emphasis on discovering scraps of lore via items or scattered NPC allies immersive and mostly enjoyable, but I felt the developers nailed the creepy horror sci-fi atmosphere more than the actual lore or story. An unknown ally drives Warren forward for most of the first 10 hours without significant explanation as to what happened in CERO while he was sedated, and most story beats are discovered via environmental storytelling, scattered friendly NPCs and collectable audio logs. All are done well, but their total impact is somewhat diluted by some shoddy voice acting and Warren’s general blandness as a character.

Still, the varied environments and how they are interconnected in The Surge deserve serious props. A robotics factory set in a dystopian future doesn’t sound as compelling on paper than the cosmic horror landscapes of Bloodborne or medieval-gothic aesthetic of Dark Souls which developer Deck13 Interactive takes clear inspiration from, but the team did a great job in creating different spaces to fight through. Junkyards, toxic waste dumps, claustrophobic recycle centers, pitch-black tunnels and corporate boardrooms are just some of the locales you will be fighting crazed human and robotic enemies in, and there’s plenty of violence and potential death hiding just around the dark corner. All are cleverly interconnected with several hidden routes, items and NPCs to discover, providing ample replayability for New Game Plus.

The core gameplay in The Surge is experienced via the third-person perspective and involves management of a ton of action-RPG systems geared towards the hardcore Dark Souls crowd. As Warren, you navigate the aforementioned varying environments within the CERO headquarters armed with whatever weapons you can find and use – ranging from basic re-purposed pipes and chainsaws to energised cutting blades, heavy duty construction tools and power fists – to defeat hostile robotic and human enemies. Upon defeating foes, you gain experience points (called ‘Tech Scrap’) which, when returning to Ops (the game’s safe-zone) you can use to level up and upgrade your equipment with stat buffs and additional damage. 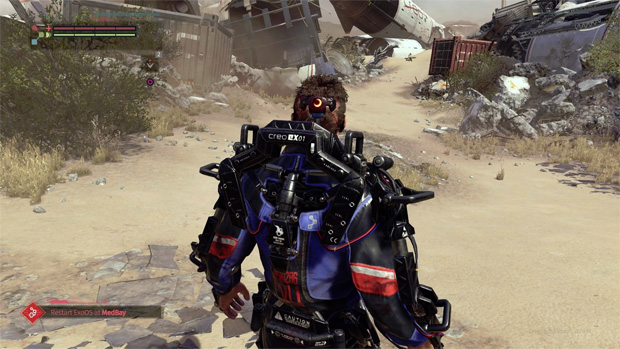 Combat in The Surge is primarily melee-focused and highly unforgiving if you don’t adapt. You need to get up close to bash, crush, punch, slash and stab your opponents before they destroy you – and trust us, enemies in this game are tough and can wipe you out in seconds with surprise attacks or simple mob rush. There is a decent amount of different human and robot enemies with varying fighting styles that kept me on my toes throughout the game – my favourite (and most feared) to fight were the suicidal dual-chainsaw wielding humans, who insanely rush you with frightening speed and chop you up if you’re not quick enough on the dodge or block button. I never felt the game was too difficult or unfair, but enemies definitely punish you accordingly if you fail to be patient and try to rush in head-on with zero tactics – newbie-friendly game The Surge is not.

With plenty of different weapon types and each having unique animations for vertical, horizontal, charge and jump attacks, you can opt to fight fast and frantic with lighter tools or smash others down hard at the cost of slower movement due to heavier equipment – the choice is yours, and I appreciated the ability to switch things up without being locked into a class due to the flexible way the gear and stats systems work. Every dash, jump and attack in the game is governed by a stamina bar, which itself is dictated by your current level and the armour and weapons you use in the field, so you also need to manage your attacks carefully and time them so you’re not left with a depleted bar and a helpless Warren who can’t block or dodge his opponent’s next killing move.

After defeating the boss enemy of the area, you can advance to the next stage (and re-visit later on to unlock sections that require higher levels or late-game items). Each level in The Surge has multiple pathways, secret areas, and scattered loot to discover and obtain, the most significant of which is implants. Up to 8 implants can be used to increase your stats and unlock new abilities or bonuses to better increase Warren’s survivability – and there is a ton of different implants to suit many different playstyles, including better health and stamina, more medkits, or better proficiency with certain weapon types. But implants need Core Power and energy, which is dictated by the armour you have Warren outfitted in. The constant search for better armour for your exoskeleton in addition to crazier killing tools and how Deck13 makes players obtain them is what makes the very solid battle systems in The Surge so addictive – you have to dismember different parts of your crazed human/exoskeleton enemies to get the armour schematics, and then build it from parts. 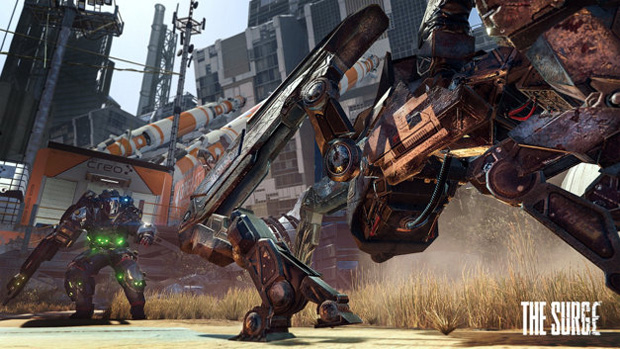 Every enemy you fight has a chance to drop valuable loot if you manage to trigger a special execution attack with gory cinematic animations (which change depending on your weapon) triggering upon complete. The very violent and stylish flair, along with the body-targeting system is how I feel Deck 13 found their own identity with The Surge’s core loop and combat systems. Smacking an enemy’s legs or arm or sensors can exploit crucial weaknesses – and enable you to get schematics for that sweet piece of gear they have equipped on that particular limb.

With so many different enemy types and attack patterns, I found it very satisfying to defeat both trash mobs and individual threats over and bosses and over again to get some cool loot or slick video replays. Some ranged attack options become available later (upgrade-able flying drone escort) to spice the core melee combat encounters up and give you a tactical edge over some late-game enemies (damn those jumping spider robots in Biolabs) but overall the developer nailed the fun of the general melee-centric combat encounters and loot gathering formula.

The graphics and visual options in The Surge is a treat and an excellent example of a mid-sized developer like Deck13 outshining studios with much larger budgets on the basis of hard work and effort for their fans. The console versions allow you to toggle a variety of visual effects (usually only offered on the PC version) and the game runs solid on both PlayStation 4 and Xbox One, at 1080p and 900p at 30fps, respectively. We reviewed the game on the PlayStation 4 Pro, which enables users to play in either performance mode (1080p at almost locked 60fps) or quality mode (up to 4K dynamic resolution at 30fps). 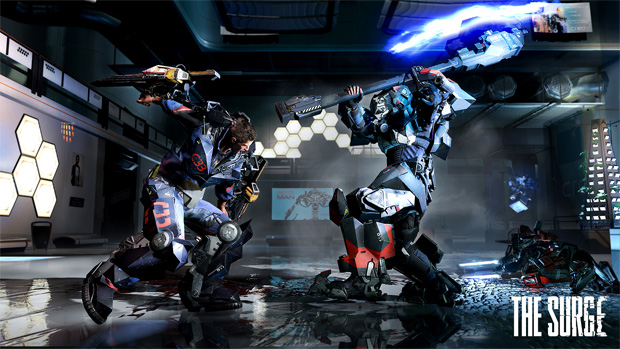 On a 4K television, The Surge ran super smooth and looked gorgeous in both modes; the icing on the cake is the game supports supersampling – which means even PS4 Pro owners using only 1080p television sets can still reap the image quality benefits the Pro makes possible. Considering a ton of big-budget games released in the same time-frame lack such options, and with HDR mode to be enabled in a free future update, Deck13 deserves serious kudos in the graphics department.

The audio and music is not great in comparison to the excellent graphics or the creepy immersive sterile sci-fi environment design. Ambient tracks consists of mostly forgettable futuristic-sounding beats playing during the main menu or tense battles and a particularly irritating Willie Nelson song played on loop in the safe rooms incessantly. The voice-work is also average, with many of the audio logs narrated in a stilted fashion – thankfully most of the NPC characters encountered are a lot more believable. 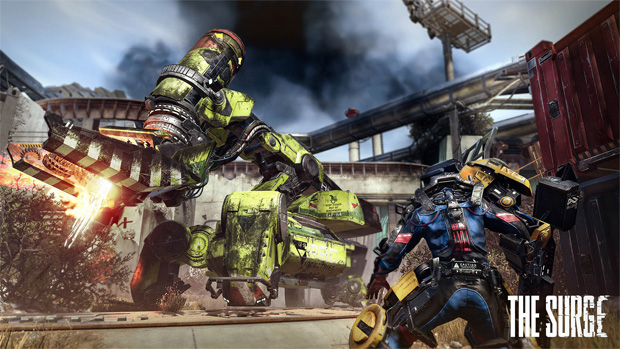 The Surge is a whirlwind of action-RPG fun with a fast and frantic melee-focused combat system which differentiates itself enough from its closest inspirations with a body targeting system and gory dismemberment executions, cleverly tied to equally addictive armour and weapon crafting loot systems. While the sci-fi story generally falls short, with the game’s themes more interesting than the actual narrative, the immersive ambience of the futuristic setting and unknown horror atmosphere made it a compelling game to play through for more than 18 hours. There’s also much more completion time required for players who want to unlock everything or replay in New Game + mode, giving it decent replay value. If you enjoy Dark Souls or Nioh or even just like intense action-based RPGs in general, give The Surge a fair go – on its own well-executed merits.