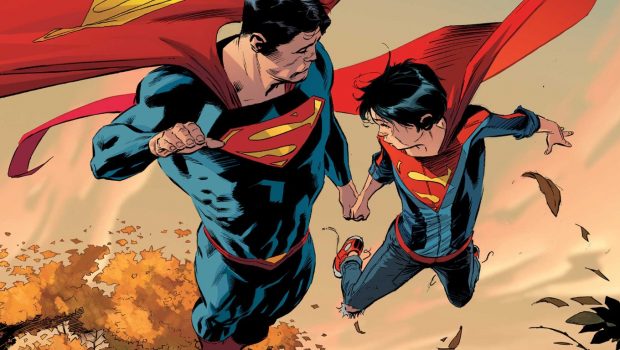 Summary: Superman #26 serves as a filler but thankfully an entertaining one with some beautiful art about fathers and their sons.

Written by Michael Moreci with art by Scott Godlewski, Superman #26 harkens back to a simpler time with the story Brains vs Brawn. It’s actually a tale about ‘two’ Superboys as the reader is taken back to Smallville as we’re introduced to a young Clark Kent as his father Jonathan gives him control of the farm for a day… on the proviso that he doesn’t use any of his powers.

So as we return to the present, Clark confides in Lois that Jon is not listening to him and when our young Superboy uses his brawn over brains to destroy some drones, it mirrors back to a lesson that a young Superman learned when he tried to use his superpowers to harvest a crop, only to destroy them. Needless to say, our young Superboy Jon still has a lot to learn and it doesn’t help that one of his friends is Damian Wayne (aka Robin).

Back in the present, two aliens have returned to Earth with Dreadnought and Psi-Phon who were behind the drones that attacked. It is here where Jon finally learns about using his powers carefully and more importantly, working as a team with his father and together, they are twice as powerful. The issue ends with a touching moment between the two fathers and their sons from different times with a message to Jon that as Clark learned from his father, he will also learn from his.

In the end, Superman #26 is a filler but it’s actually an interesting one that cements the relationship between Clark and his son Jon with a story filled with wholesome family values. The dialogue works well and Moreci should be commended on bringing these two characters to life. Add in the excellent art from Scott Godlewski and Superman #26 serves as a nice breather until the next story, Super-Vacation!