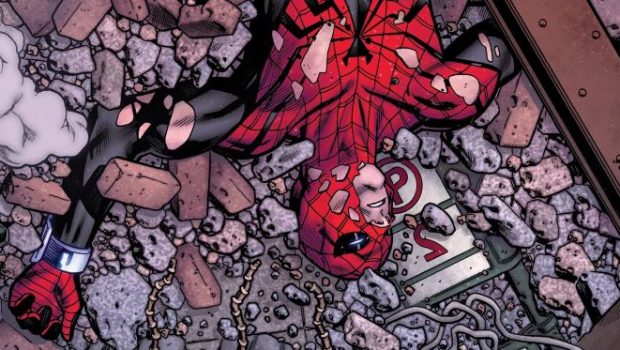 The Die Is Cast

Elliott Tolliver is dead and so is the Superior Spider-man.

I’ve put off writing this review for as long as possible. The ride is over. What began in 2012 has been killed in such a way that, bar time travel, can never be resurrected again. I normally never use the word shame, but it’s a damn shame.

Using a cloned body of Elliott Tolliver, Otto gets through Norman’s security. Doctor Octopus then kills the clone and in a fairly comical scene deals with the Spiders-man being attacked by Otto’s Spider-Bots (I’m really going to miss those guys). Norman tries calling Otto’s supposed bluff by dropping the boy out a window. Otto doesn’t move.

Norman is shocked. He thinks Otto just willingly watched him commit murder, But come on, we know that’s not the end of it. There is still some shred of Elliott Tolliver left inside Octavius and he used one of his old harnesses to catch the boy. Norman than attacks Otto, exclaiming that he still has more arms than him.

Dozens of harnesses show up, with Otto exclaiming that he has a Superior Mind. Using the harnesses, he breaks every bone in Osborn’s body, leaving his brilliant mind trapped in a body he can’t use. Taking the web of life fragment from Osborn, he sends him back to his reality. Using Osborns camera’s he announces the true return of Doctor Octopus, but does note that if anybody tries to come after the Superior Spider-mans friends, they’ll have to deal with him. During his rant, he calls the Superior Spider-man’s existence “a disease of the mind”.

He meets with Anna and Emma one last time. They trie to reach Elliott inside of him, but Otto buries it and lets them know that he does not remember Spider-man’s true identity. Anna realizes he came to say goodbye and that Otto also came to them to have them talk him into staying. Doc leaves threatening them, but WE get a view of his face. A face full of tears.

Max Modell, Emma, and Anna all speak at Elliott’s funeral. They call him a friend, a confidant, and a lover. Emma says that she knows how hard he tried. He tried so damn hard, but the status quo just wouldn’t let him.  Otto is watching from afar and tells Digger that if anybody pays for the Brothers Grimm’s hospital bills, he’ll kill them. When asked about Otto’s time as Spider-man and if he enjoyed it, Otto claims not to dwell on it… and we finally figure out why Otto says “The die is cast.” Because in his words:

“For once a die is cast, there is no turning back.”

The final image is a homage to Spider-man no more, with the suit in a garbage can and Ock’s back to the camera, walking away.

This ended far to soon and The Superior Spider-man is no more. This issue gets a 5 out of 5 for content. I’d give it a 2 because of the editorial decision made here but the book is just so damn well written and drawn.