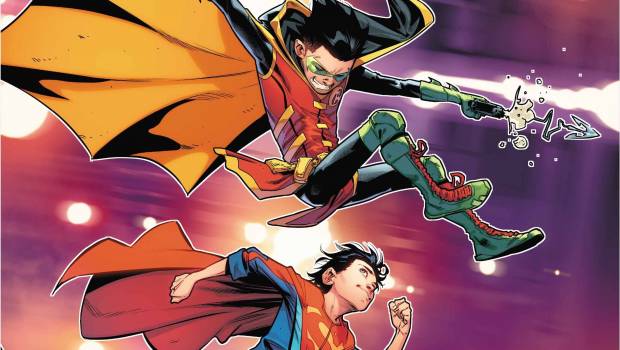 Summary: This book is a very enjoyable 4 stars out of 5. 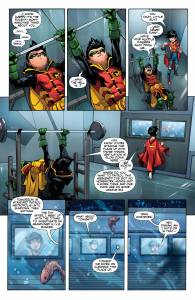 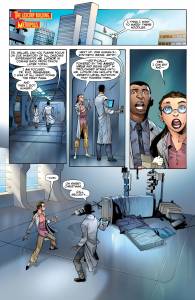 This issue is the first in a new arc, and as such is a great hopping on point for new readers.  It begins in a Lexcorp building in downtown Metropolis.  Two scientists approach their lab, where we quickly discover the being they were experimenting on has escaped.  This sets the stage for the appearance of this arcs villain.

We then cut to Superboy approaching the Super-Sons underwater secret lair and get to enjoy part of what makes this book so good.  As well as being super-heroes, Superboy and Robin, also known as Jonathan Kent and Damian Wayne, are best friends.  The relationship comes across as authentic.  While the pair are pretty much polar opposites, they have a genuine affection for one another.  This comes across in an unforced manner in all the scenes between the two.  They joke around as good friends do, which is humorously portrayed when Superboy places a finger on Damian’s weights mid-lift, in probably the funniest moment in the book.  The moment doesn’t last long, as a villain from the first issue reappears!

It would seem that those Lexcorp scientists had been experimenting on Kid Amazo, a creature that had previously merged with a young boy that they had defeated over a year ago.  He has returned seeking revenge and a new power source.  The battle scene is actually really well done, as both Robin and Superboy complement each other well.  Robin is clearly the tactical mastermind, and Superboy the muscle.  The way they work together  clearly speaks to their friendship.  Robin’s reaction when he makes it away from Kid Amazo and realizes his best friend hasn’t shows that.  At it’s heart, this book and this series is about the friendship of the sons of Superman and Batman. 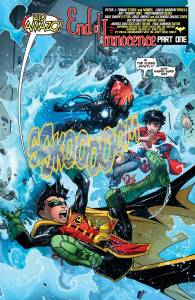 The art in this book is great.  Carlo Barberi does a great job capturing both the innocence of Superboy and the cynicism of Robin in their facial expressions and body language.  He does an especially good job capturing the innocence of Superboy, which is fitting given the name of the arc being “End of Innocence”.  The look of the villain is menacing.  Despite the name of Kid Amazo, this issue’s antagonist looks both dangerous and creepy, like some kind of alien cybernetic skeleton.  The colouring is bright, as befitting a more youthful oriented story, but does get a little darker along with the story as it ends on a cliff-hanger. 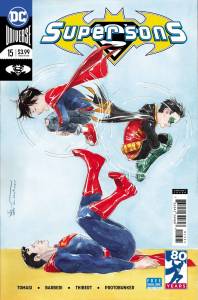 This issue does feature two covers, the first by Jorge Jimenez and Alejandro Sanchez, featuring Superboy and Robin swinging into action, and a variant by Dustin Nguyen, featuring Superman laying on his back and spinning the boys in the air.  I felt the primary cover to be the stronger of the two.  It ties in more closely to the feel of the characters, the story, and the overall feel of the series.  The variant looks more like a throwback to another era.  While a neat piece of art, it feels more like a collection piece than a complimentary part of the book.

This was a pretty good book overall.  As mentioned above it is the first book in a new story arc, which makes it an accessible read to someone that doesn’t usually follow this series, and because of this there is a lot of exposition.  One of the nice things that Peter J. Tomasi does is interspersing the exposition with character development, humour, and one good action scene.  The cliff-hanger leaves us really wondering what will happen next, and really raises the stakes for the next issue.  This book is a fairly easy read, and quite enjoyable.  It’s not a challenging story or ground-breaking, but being a book focused on the friendship of Superboy and Robin, it doesn’t need to be.

This book is a very enjoyable 4 stars out of 5.