Summary: Super Smash Bros. Ultimate is the most content-rich, feature-laden iteration of Smash to date.

It’s no secret that I have been rather critical of many of Nintendo’s first party releases in 2018, mainly due to the slate of Wii-U titles that were rereleased on the Switch with underwhelming new content. Along comes Super Smash Bros. Ultimate, a game that could certainly give the impression of being an updated version of the Wii-U’s Smash 4 by simply comparing screenshots. Yet a few hours with the game would reveal that not only is this a whole new iteration of Super Smash Bros., but is in fact the most content-rich and expansive Super Smash Bros. game to date. 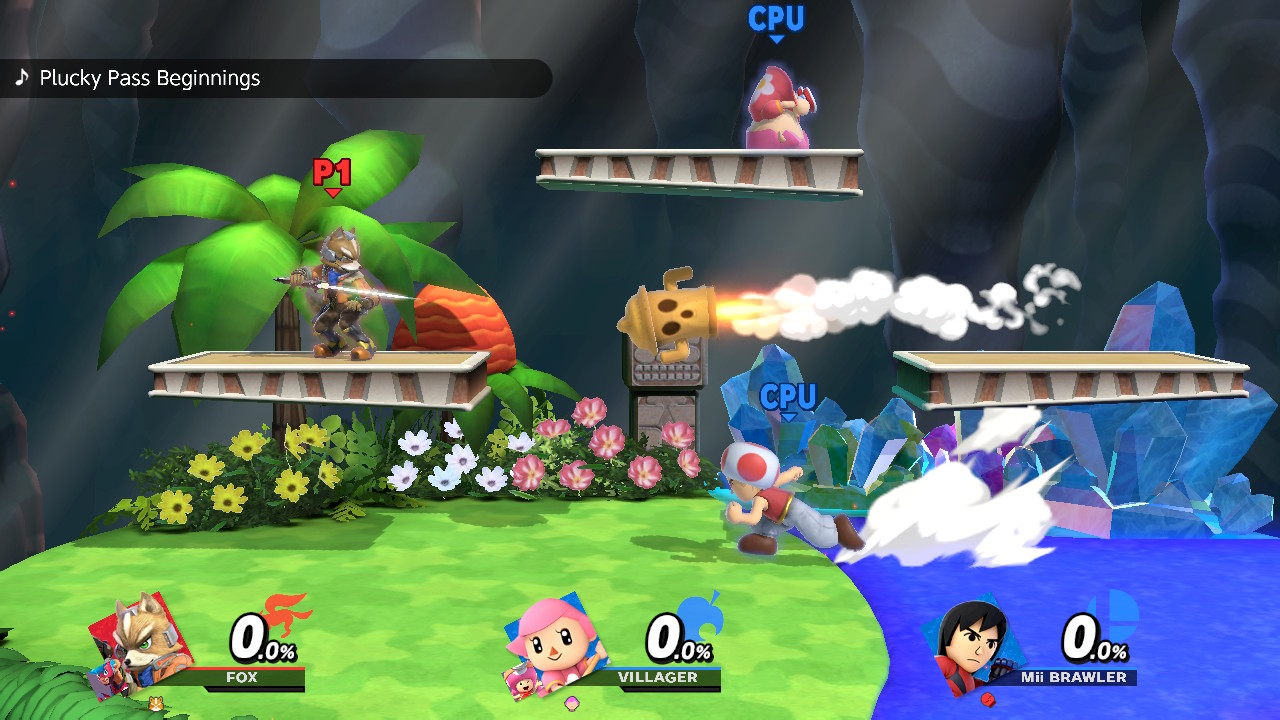 Super Smash Bros. Ultimate is the fifth generation of Nintendo’s iconic character brawler and continues to uphold the core gameplay philosophy that has endured throughout the series since its inception. If you’ve never played a Smash Bros. game before, think of the gameplay like a 2D fighting game with a focus on speed, aerial manoeuvres, zone control and quick, simple to perform moves. But what truly makes Smash such a revered and exciting franchise is its stoic dedication to celebrating everything Nintendo. 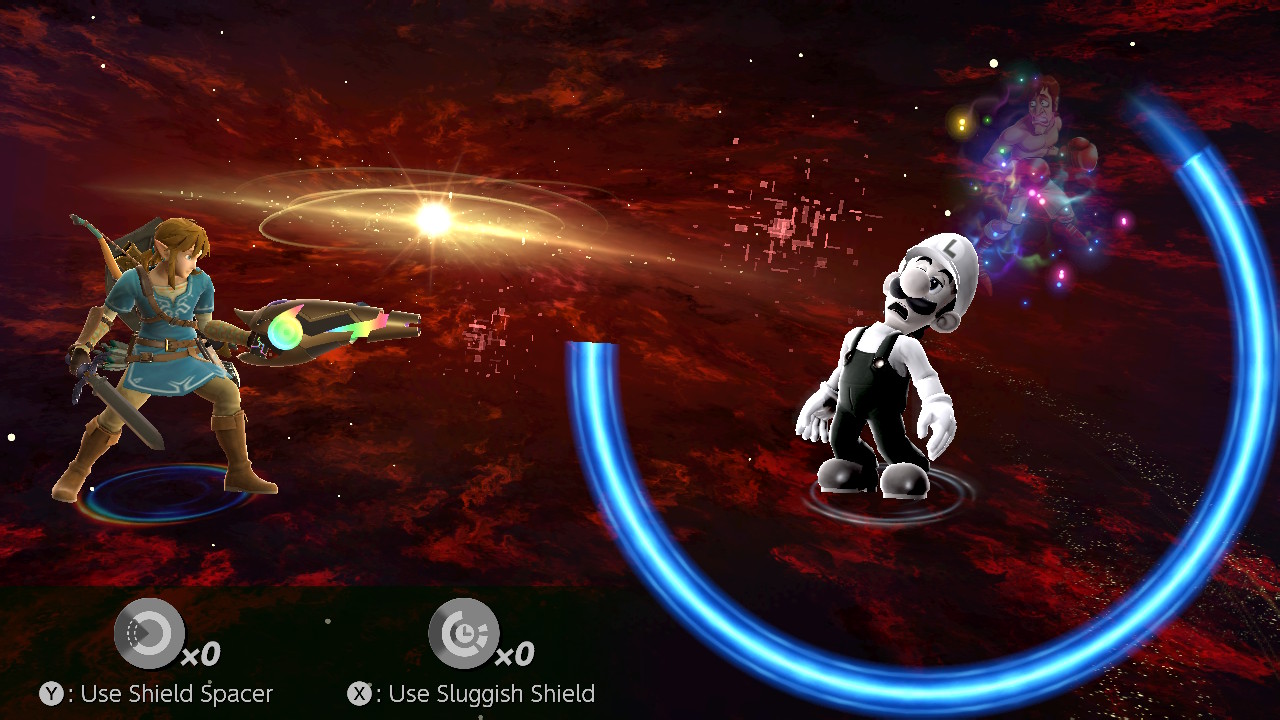 This enthusiasm for Nintendo fan service seems to be the guiding credo for the development of Super Smash Bros. Ultimate, as this is the most expansive and comprehensive Smash title to date. Every character and every stage ever featured in a previous Super Smash Bros. game is available, plus an additional 11 new characters and 4 new stages. That makes a total of 74 characters and 103 stages, with more available in the coming months in the form of paid DLC (more on this later). 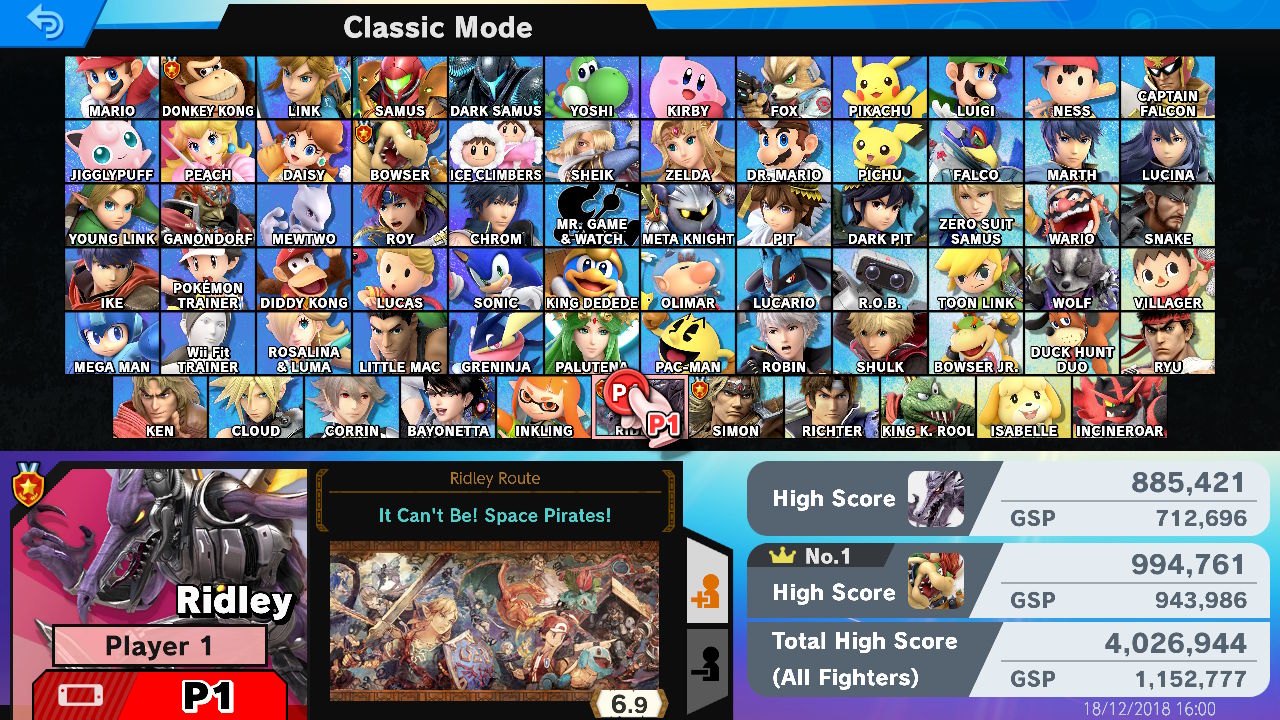 And yet for me, the most impressive aspect of Super Smash Bros. Ultimate isn’t its staggering number of characters and stages, but rather it’s rich and incredibly creative new single-player mode: World of Light. While not as linear and story-driven as the fan-favourite Subspace Emissary campaign from Super Smash Bros. Brawl, World of Light is a collection of unique and fascinating challenges littered throughout a huge board-game-esque overworld. 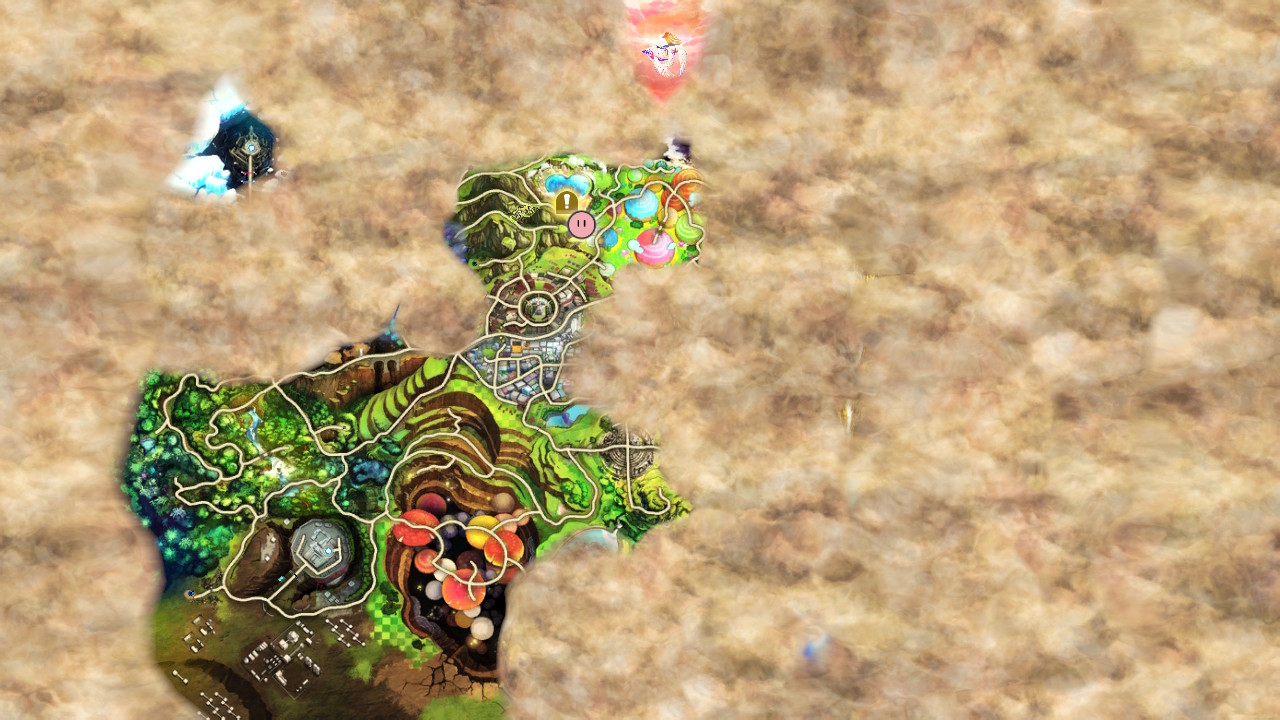 As you make your way through a branching network of paths and areas on the map, you’ll encounter nodes representing Spirit challenges. These challenges are smash battles with unique rules and modifiers that are thematically based on characters from various Nintendo properties and other franchises featured in Super Smash Bros. throughout the years. For example, one of the earliest challenges is based on the Spirit of Rabbid Donkey Kong, one of the first bosses in Mario and Rabbids: Kingdom Battle released for the Switch last year. This challenge pits you against Donkey Kong with white fur and a bunny hood item, which loosely resembles the character of Rabbid Kong. Defeating the challenger awards you with the Rabbid Kong Spirit for use on your adventure. 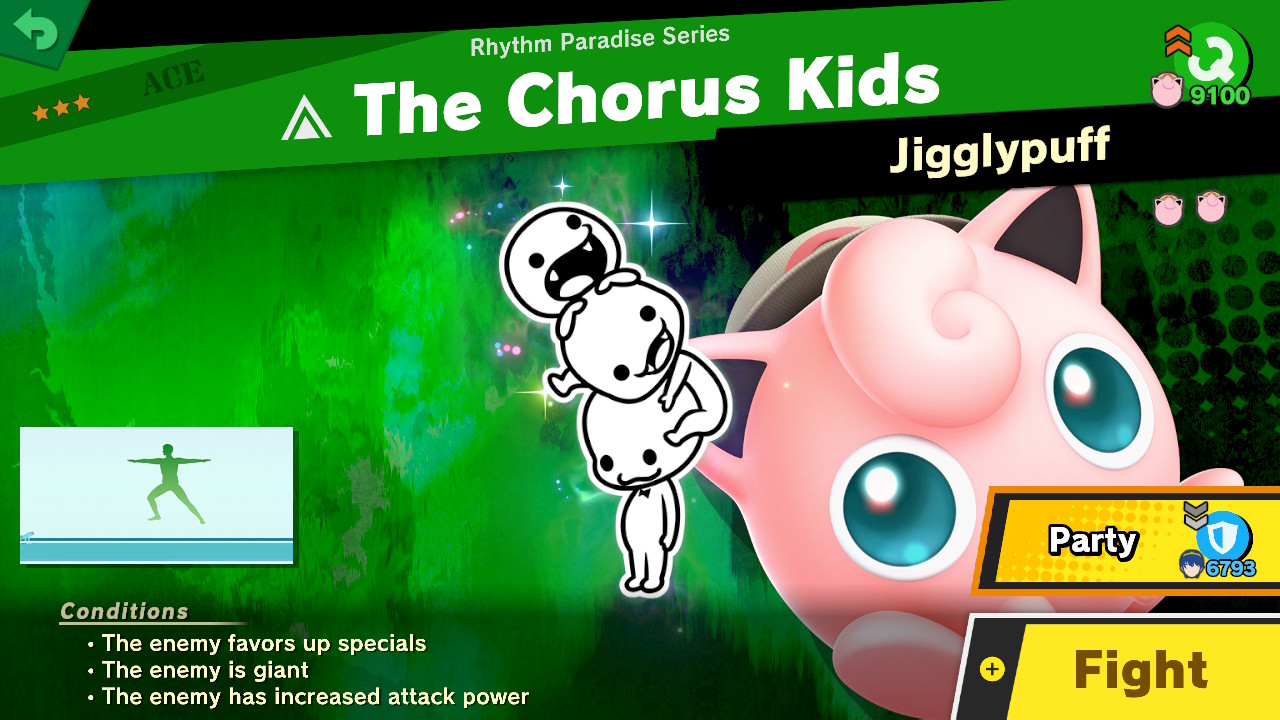 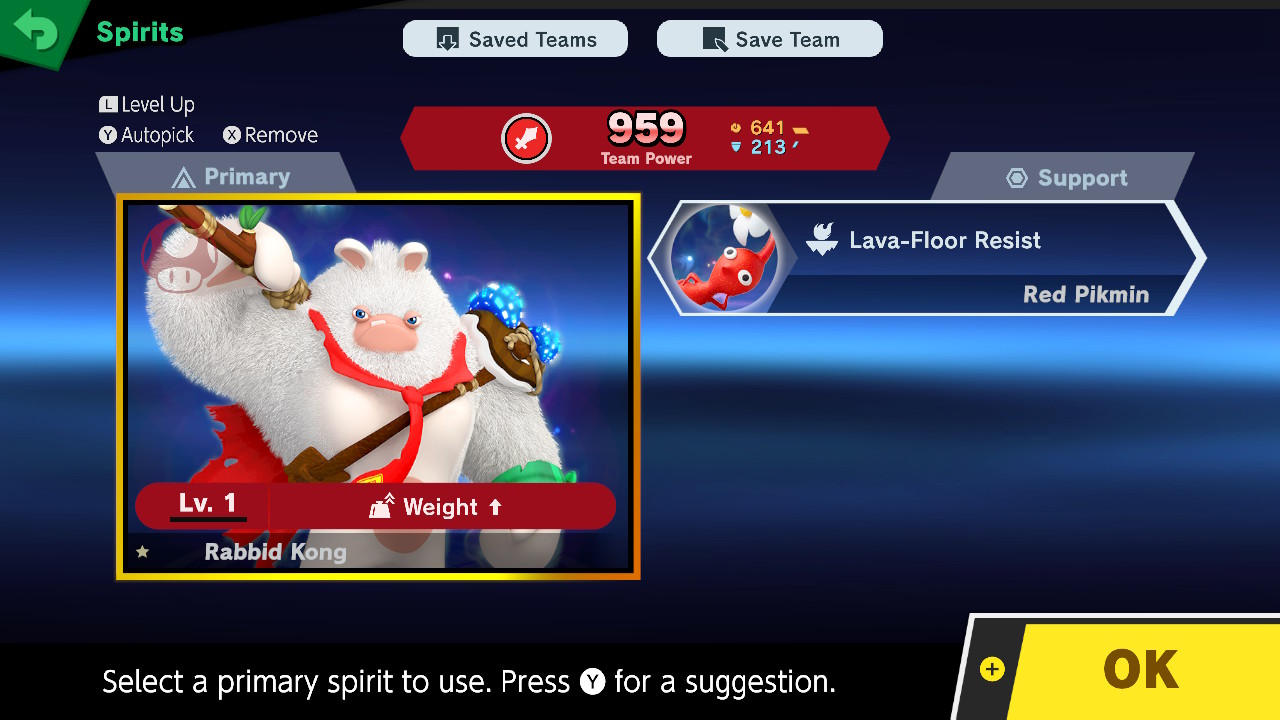 The creativity on display in these Spirit challenges is truly astounding and really kept me hooked on the mode for hours on end. It’s always interesting to see an obscure character from one of your favourite games represented as a challenge and the various rules and modifiers used to match the character thematically. Plus, the huge pool of Spirit perks kept the progression exciting as I was constantly swapping perks and trying new character builds to better suit the challenge I was about to face. 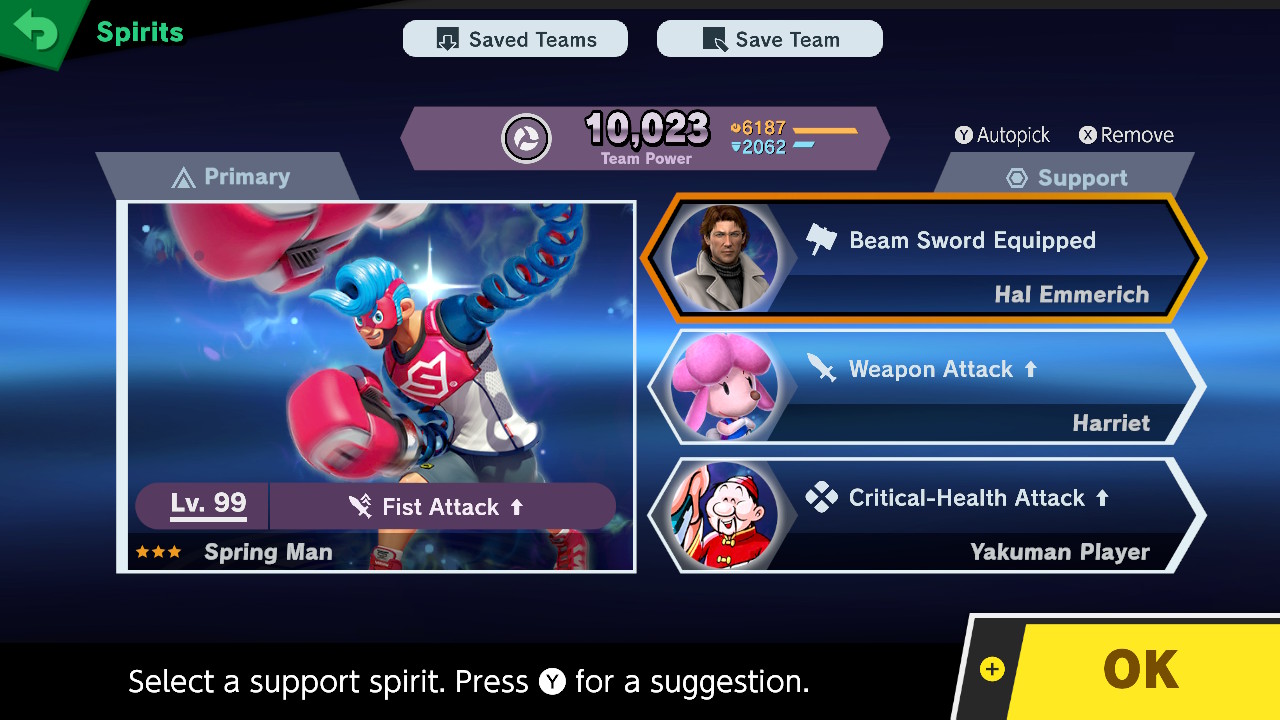 Of course, if you simply prefer to play some fair dinkum Smash without all these fancy stat bonuses and battle modifiers, Ultimate has plenty of modes for that too. Alongside the standard Smash battle are a variety of additional modes for setting up tournaments and multi-round bouts, plus one of the most interesting classic modes in a Super Smash Bros. game to date. 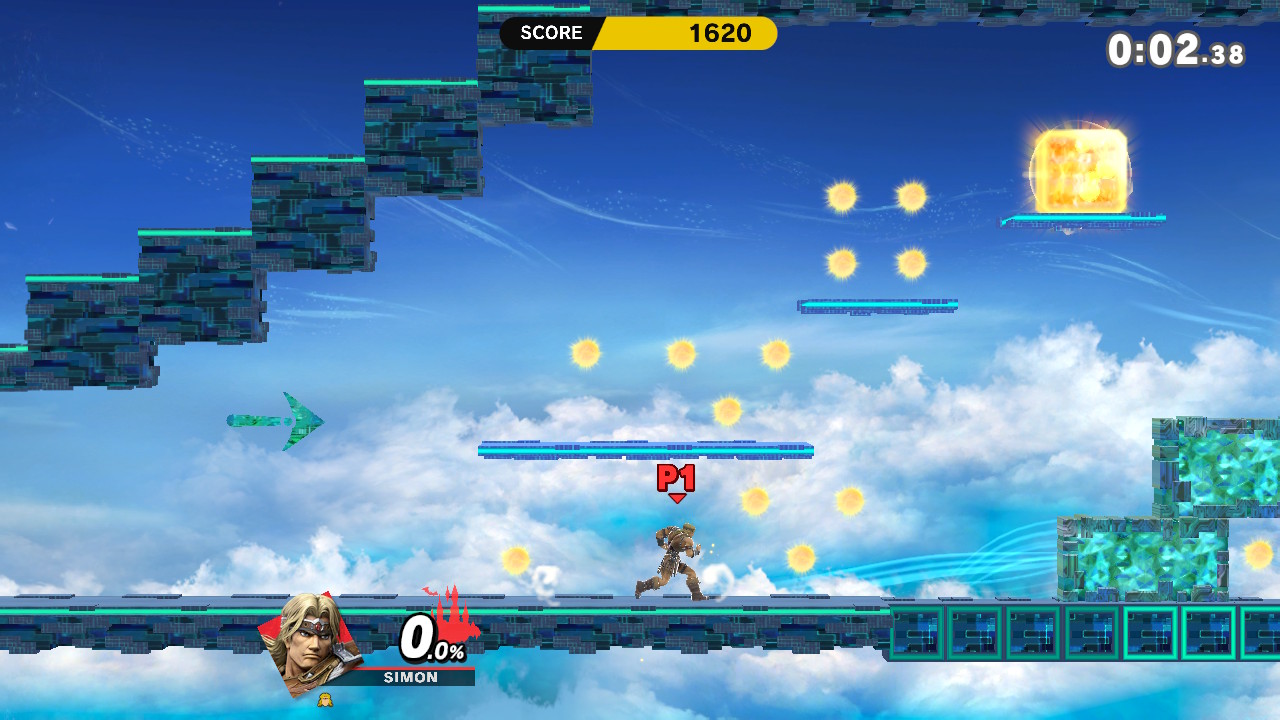 The new classic mode features a string of fights unique to the character you choose with a bonus stage before the boss at the end. For example, playing through classic mode with Simon Belmont has you facing off against various monstrous characters such as Bowser and Ridley, before culminating in a fight against a unique Dracula boss character. You can also adjust the difficulty of the challenge to increase the reward of Spirits and currency upon completion. 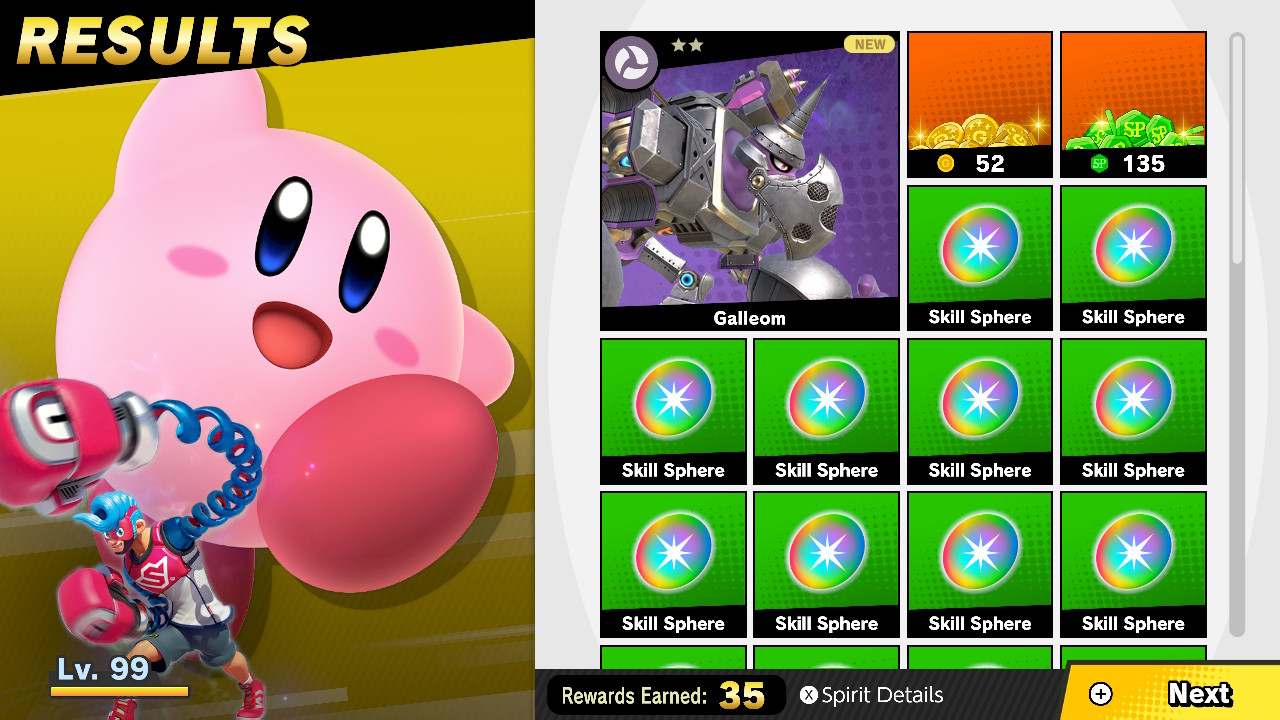 As much as I love the single player aspects of Super Smash Bros. Ultimate, I would imagine the majority of my time with this game will be spent in the extensive multiplayer modes. The highly customisable rule sets and gameplay modifiers make a welcome return for all your local multiplayer needs, whether you’re sharing a single Switch or playing wirelessly with multiple Switch consoles. Plus the inbuilt support for a variety of control schemes including single Joycons and Gamecube controllers with an adapter means everyone can play the way they find most comfortable. 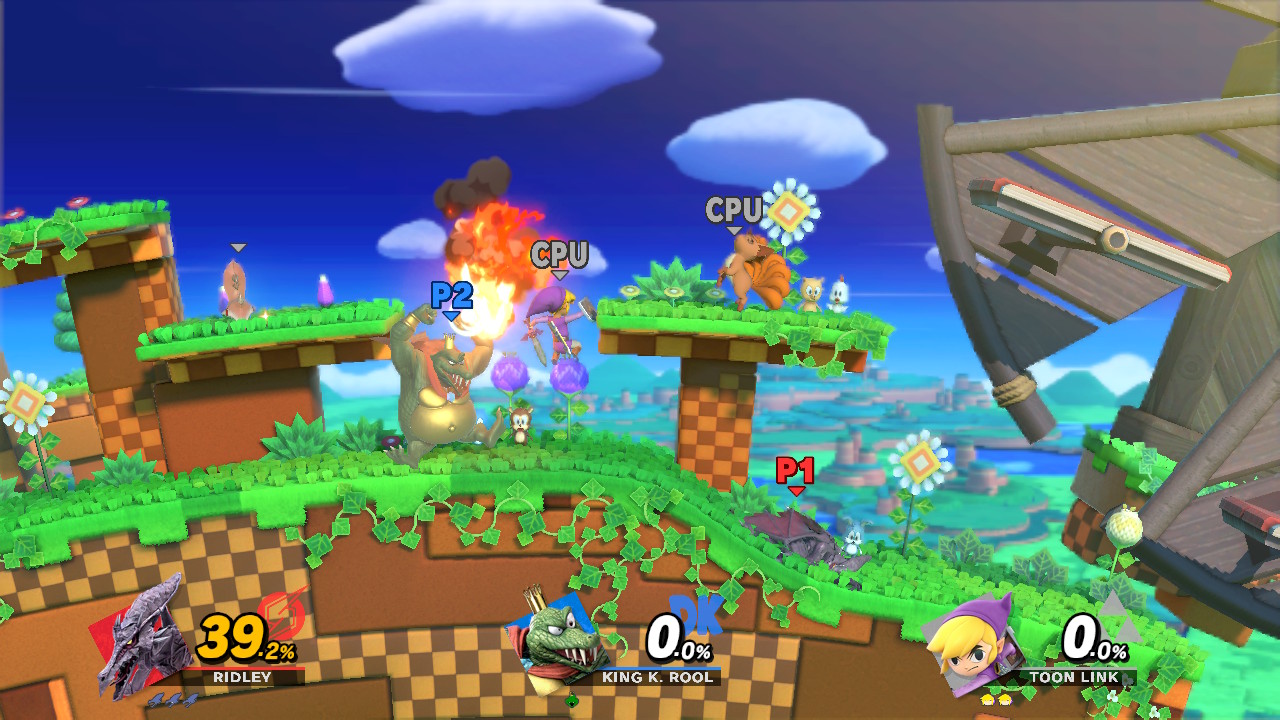 If you’re feeling particularly confident in your Smash skills, you can really test your worth with online matchmaking. Providing you have an active Nintendo Switch Online subscription, you and a friend can jump online for some Smash with players from around the globe. There are a bunch of rulesets to choose from to ensure you’ll only get matched into games that you feel comfortable playing and your rank will fluctuate with each win and loss, ensuring that you only get paired up with opponents of a similar skill level. Out of the dozens of matches I played online, the netcode proved stable, games were lag-free and the queue time ranged from ten seconds to two minutes. 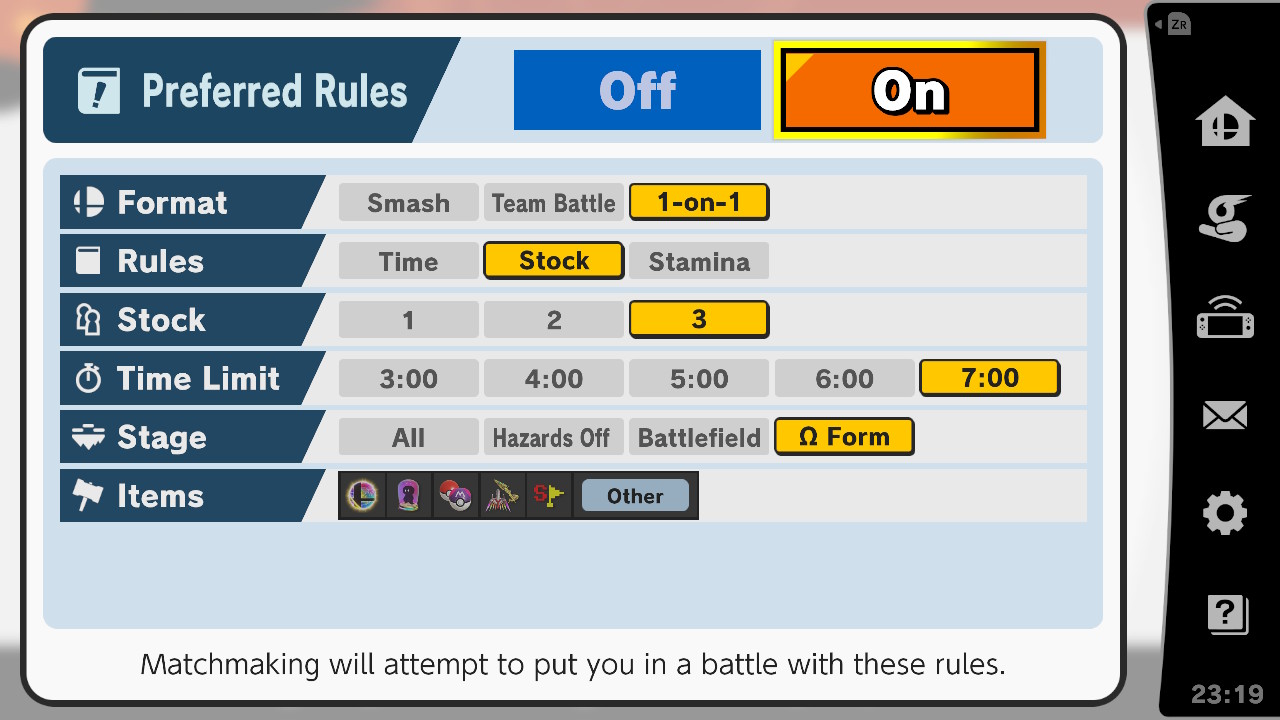 Nintendo have also announced additional playable characters to be released as part of a paid DLC pack called the Fighters Pass. The Fighters Pass includes five additional characters, each with their own stage and music tracks. Each character pack will also be available for sale separately upon their release. The first announced character is Joker from Persona 5; a complete left field choice that not only fits perfectly with the Smash Bros. vibe, but also indicates that we could be in for a real treat with these DLC characters. 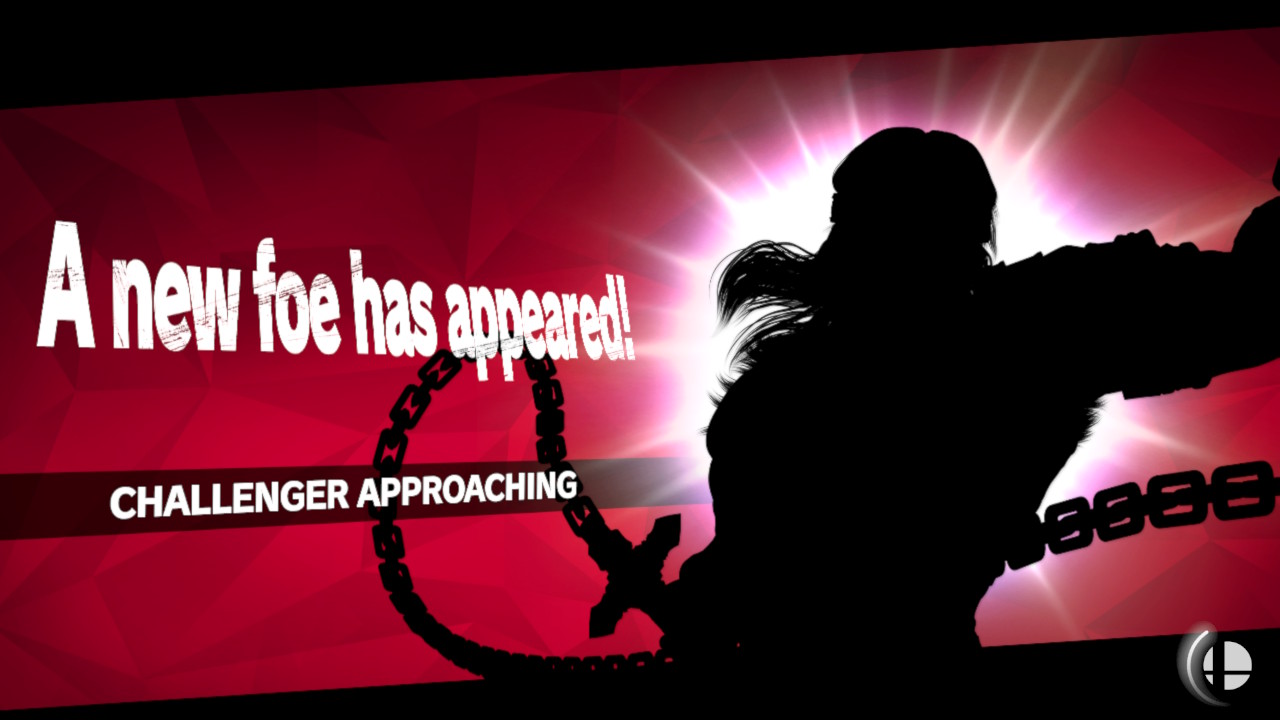 As much as I have espoused the virtues of Super Smash Bros. Ultimate, there are a few negatives to the game that must be discussed. The first issue that everyone will encounter is the way characters are unlocked. When you first boot up the game, you’ll only have access to the initial eight characters from the original Super Smash Bros.. Characters can be unlocked in a variety of ways, including by completing certain challenges or by unlocking the character in World of Light. 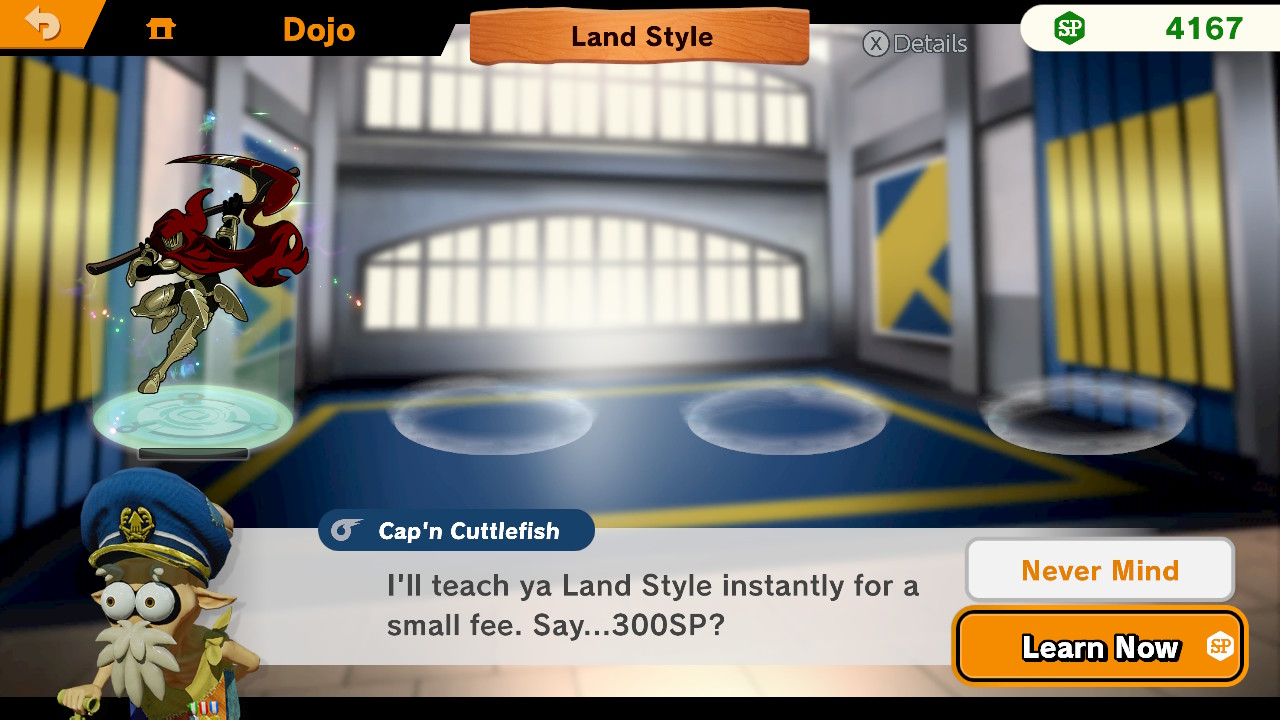 Both of these methods would take dozens of hours to unlock every character. Thankfully, if you’re impatient and nefarious (like me) there’s a much simpler, albeit far less satisfying, way to unlock the roster. Simply put your Switch into rest mode when you’re in the World of Light overworld, then boot the game and return to the main menu ten minutes later. A new character challenge will appear, which when defeated, allows access to the character in modes outside World of Light. This can be repeated until you have every character unlocked. It’s undoubtedly annoying to not be able to play your favourite characters from the get-go, but I personally enjoyed the drip feed of new characters as it gave me an opportunity to test out each new character as I unlocked them. 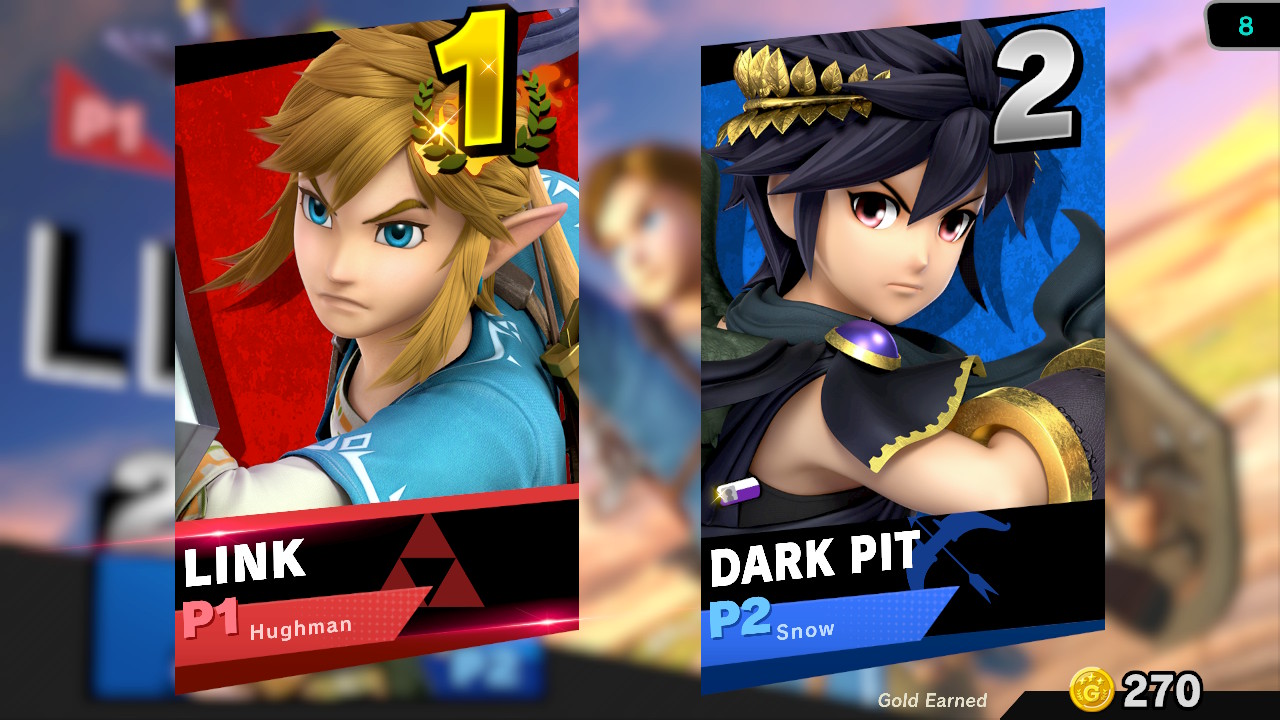 Another issue I have with Super Smash Bros. Ultimate is the removal of the level creator. I’m assuming it’s absence indicates that it wasn’t such a priority for fans of the series, but I certainly appreciated its addition in Smash 4 and Brawl. Thankfully the fantastic Mii-fighters make a welcome return with plenty of customisable moves and gear to unlock as you progress through the game. 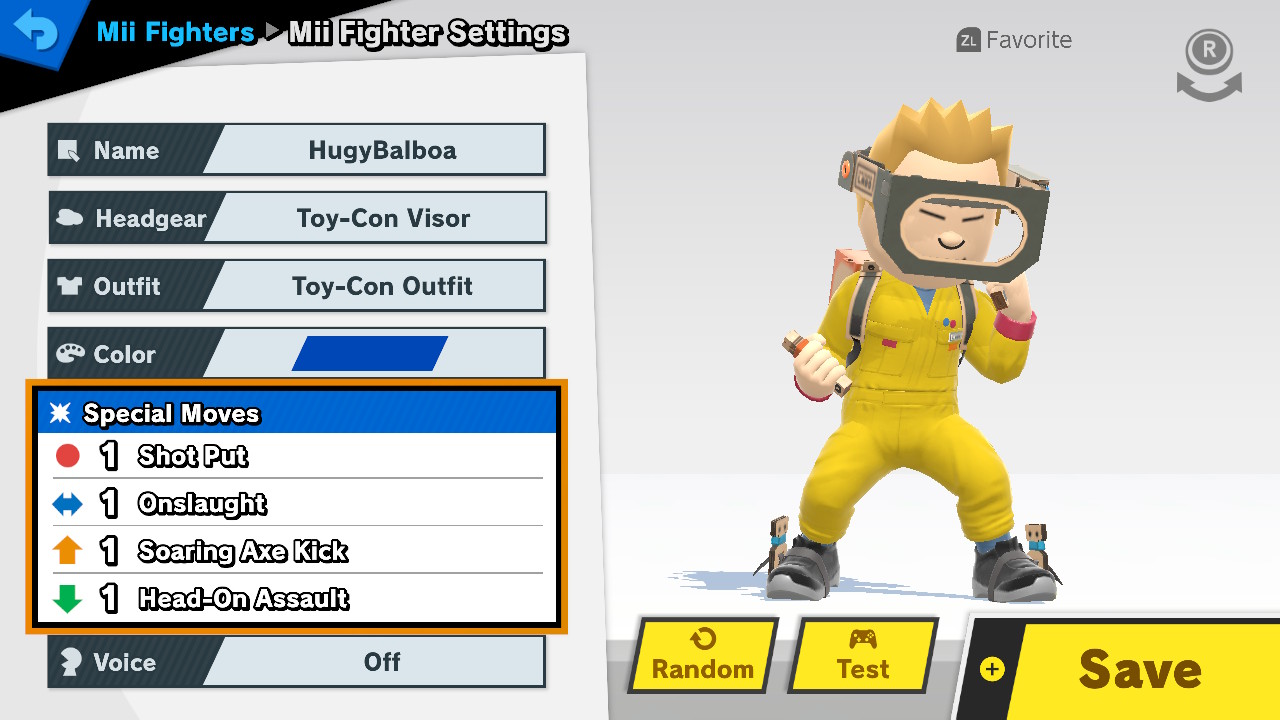 A few other issues to note: trophies have been removed from the game, with their obvious replacement being the litany of Spirits to unlock and collect. Also, the install size of the digital version of Super Smash Bros. Ultimate is a whopping 14GB, which puts a noticeable dent in the real estate on any SD Card. Undoubtedly a large portion of this install size is the huge library of music tracks included in the game, which I would have appreciated as an optional download to save some space. 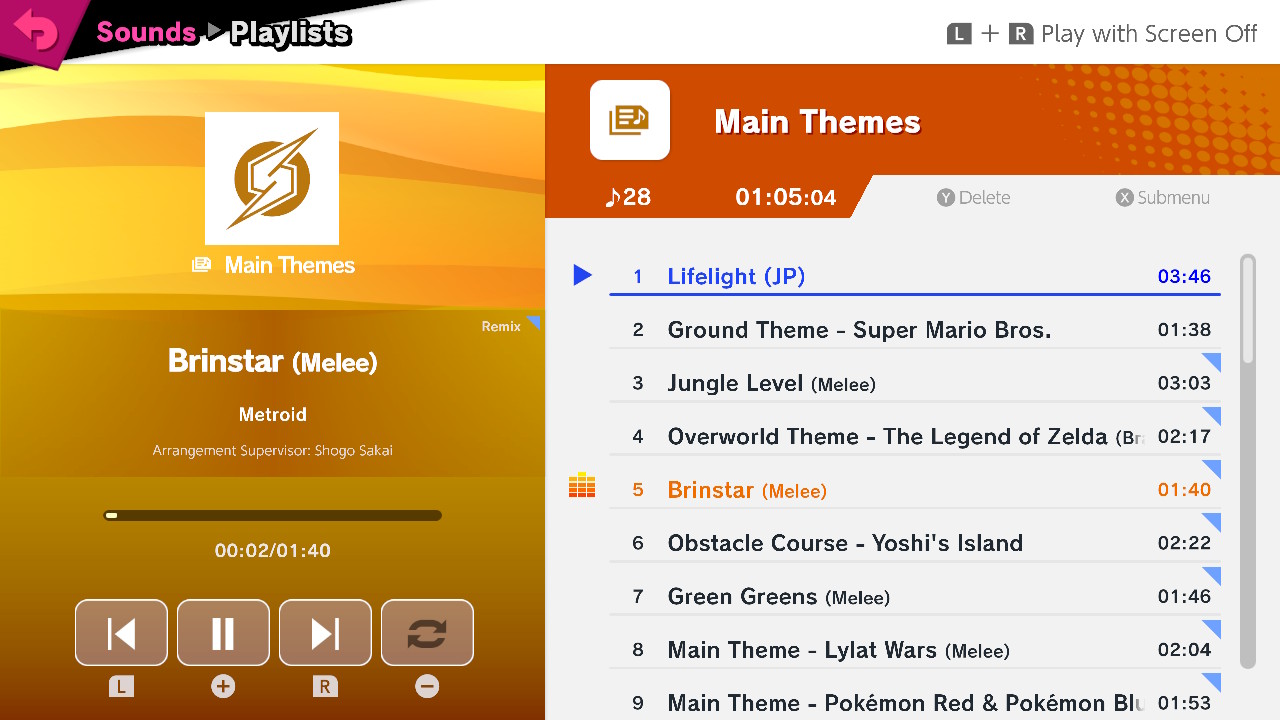 I could continue to go on about how much fun the new characters are, the interesting Amiibo training modes, the fantastic music and art collection… but the bottom line is this is a fully-featured, portable Super Smash Bros. game that looks fantastic, has a ridiculous amount of content and plays exactly like you want it to. This is the perfect place for newcomers to jump into the series and a fantastic title that veterans will absolutely devour. 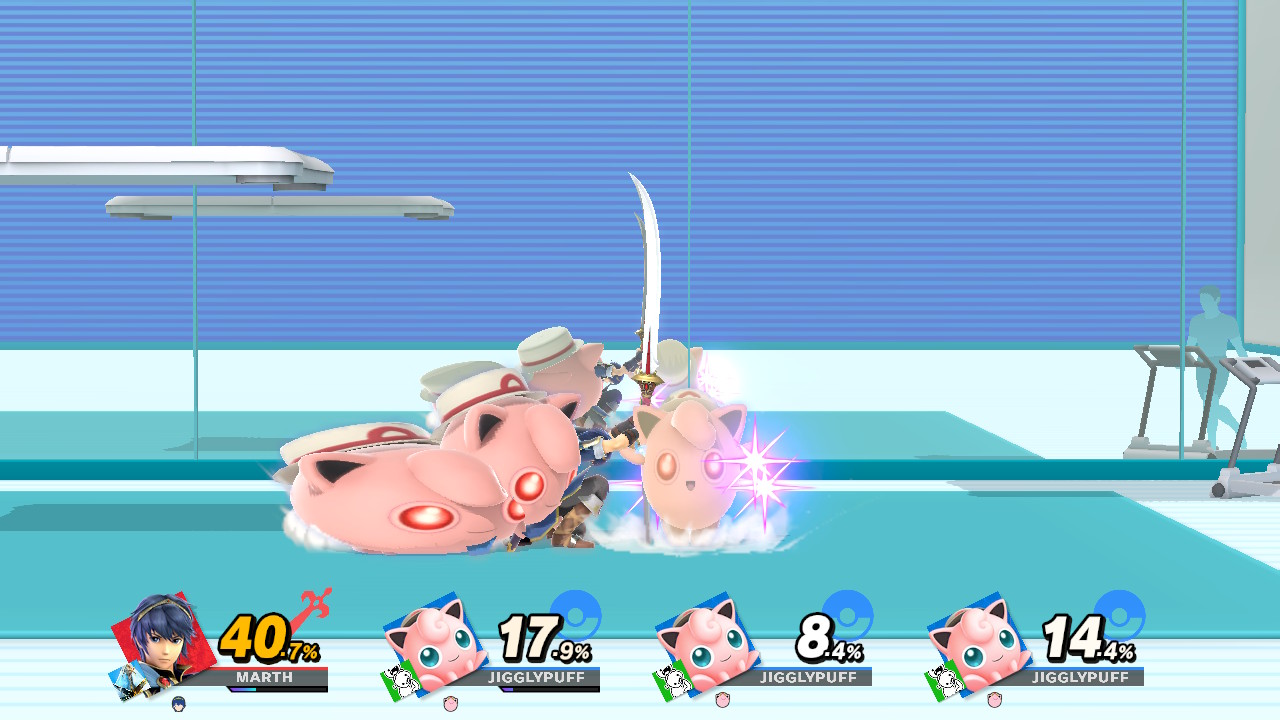