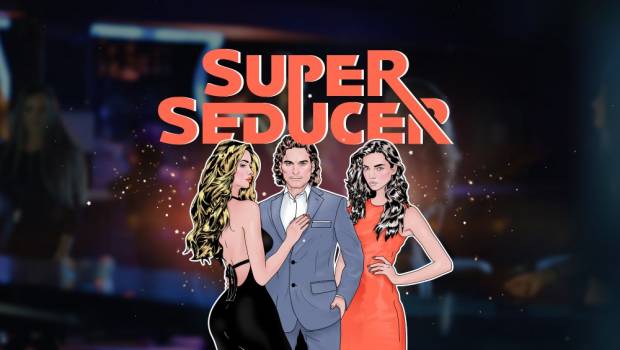 Summary: Save your money and treat the opposite sex as humans instead of objects.

When I saw this title pop up in the list of titles to review I honestly thought it would have to be a parody game. Surely no one would actually put out a game “teaching guys how to seduce women”. But as I read the accompanying material it started to become painfully clear that the “game” takes itself very seriously (to the point of being a joke though it doesn’t realise it). 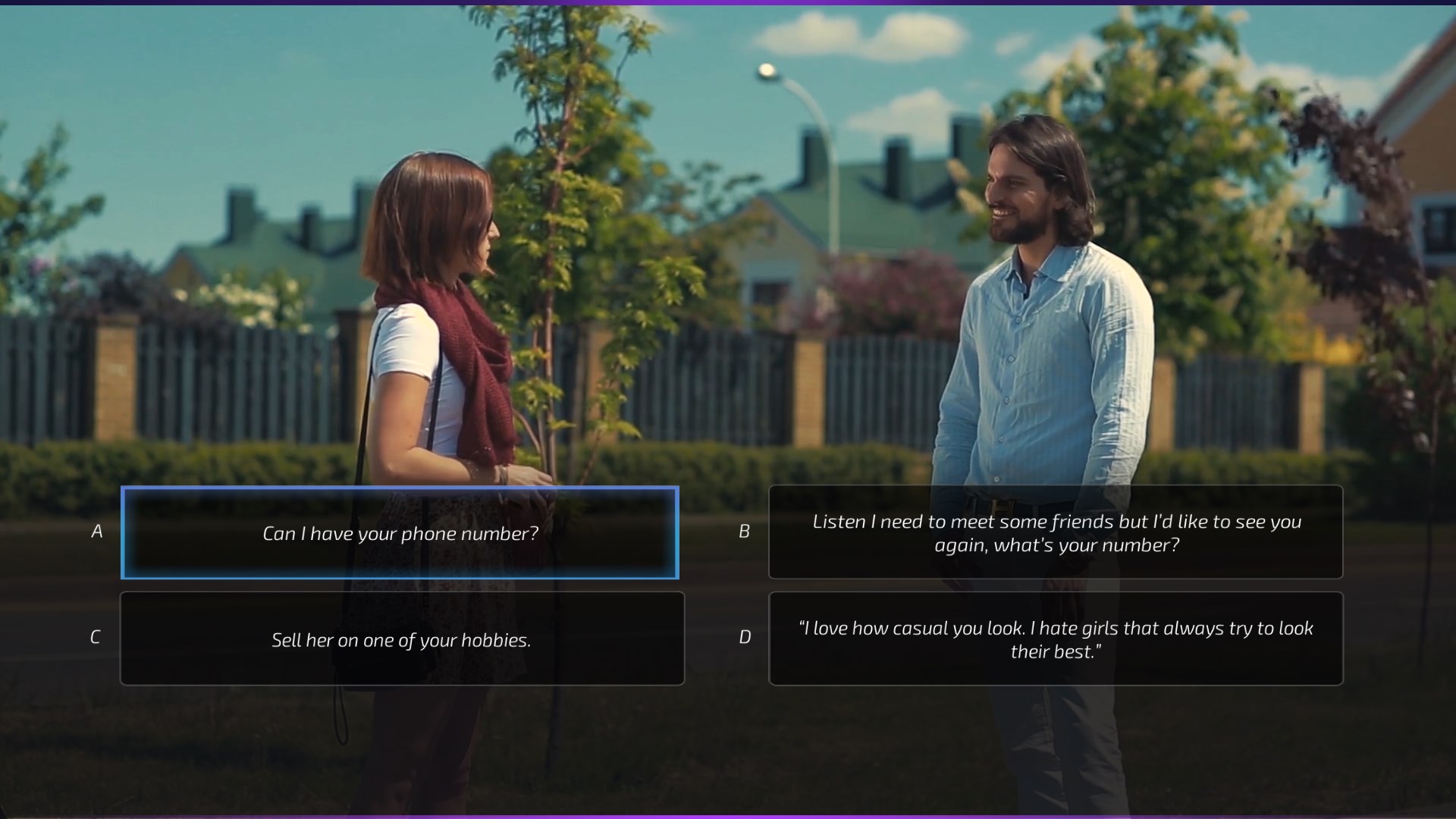 Before the “alpha males” have a chance to throw the insults around, here we go I’m a lefty, pansexual, socialist who believes women should be treated with respect and are still getting an incredibly raw deal in this modern age. So now that’s out of the way… let’s (regrettably) look at the “game” in more depth. 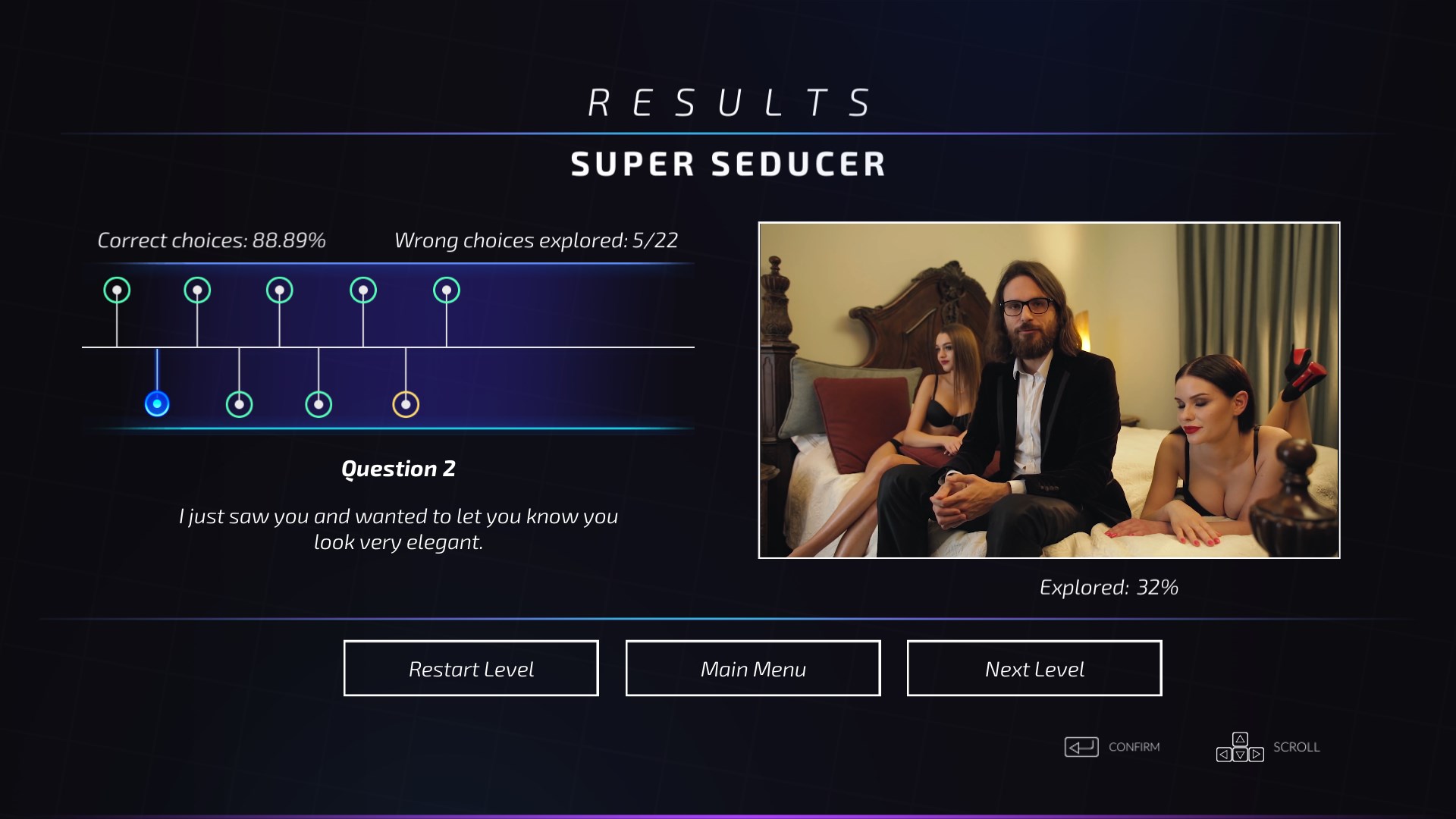 Super Seducer claims you will “Learn state-of-the-art seduction secrets from the master himself, Richard La Ruina, in this incredibly valuable live action seduction simulator”. There are a number of problems with this, one is that calling it a “seduction simulator” is a bit of a stretch. Calling it a choose your own pick up line program would be better. Richard La Ruina “by his own admission… was unsuccessful with women throughout his early life, by age 21 he had never  kissed a woman”…. he then apparently learnt from other Pick Up Artists around London pubs and clubs and became this alleged master. So really it’s trying to be a Pick Up Art trainer… but the so called Art of the Pick Up frequently uses deception and in some cases “negging” (the technique of putting someone down so that they end up having an increased need for the manipulator’s approval). 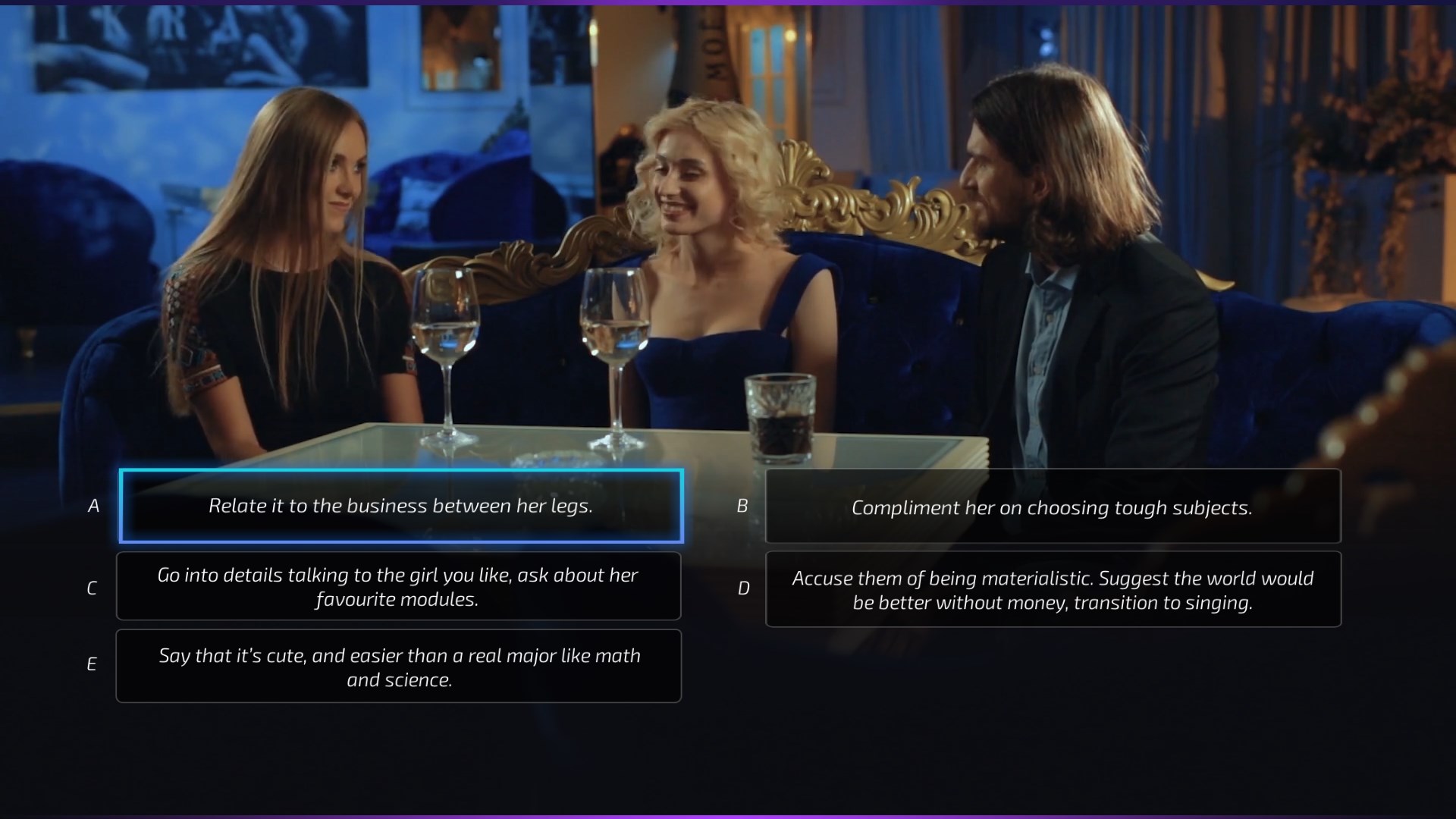 Richard or let’s go ahead and call him Dick… Dick tries to suggest at various points that this program is all about helping you find a woman… now if the aim was truly to get help someone feel more comfortable around someone they are interested in then maybe it would have some merit… but any attempt at trying to suggest that is what this is doing is thrown out the window when you see the “review” screens. The program plays a bit of video for you, various encounters throughout the game, you then choose how you would approach the situation from a selection of phrases or moves. Once you’ve made your selection the video plays out that choice and then it’s followed up by Dick telling you how you did. If you chose the worst option then it’s just him sitting on a bed telling you you made the wrong choice (sometimes having a little chuckle if you happened to select one of the horrible options), if you chose a decent option then he has two fully clothed women on the bed with him, lying down on either side. If you pick the best option then the women are on the bed with him in only underwear with one lying on her stomach for full cleavage exposure… so only the thickest of people would not think he is trying to imply that using his techniques will get a woman (or women) into bed with you. 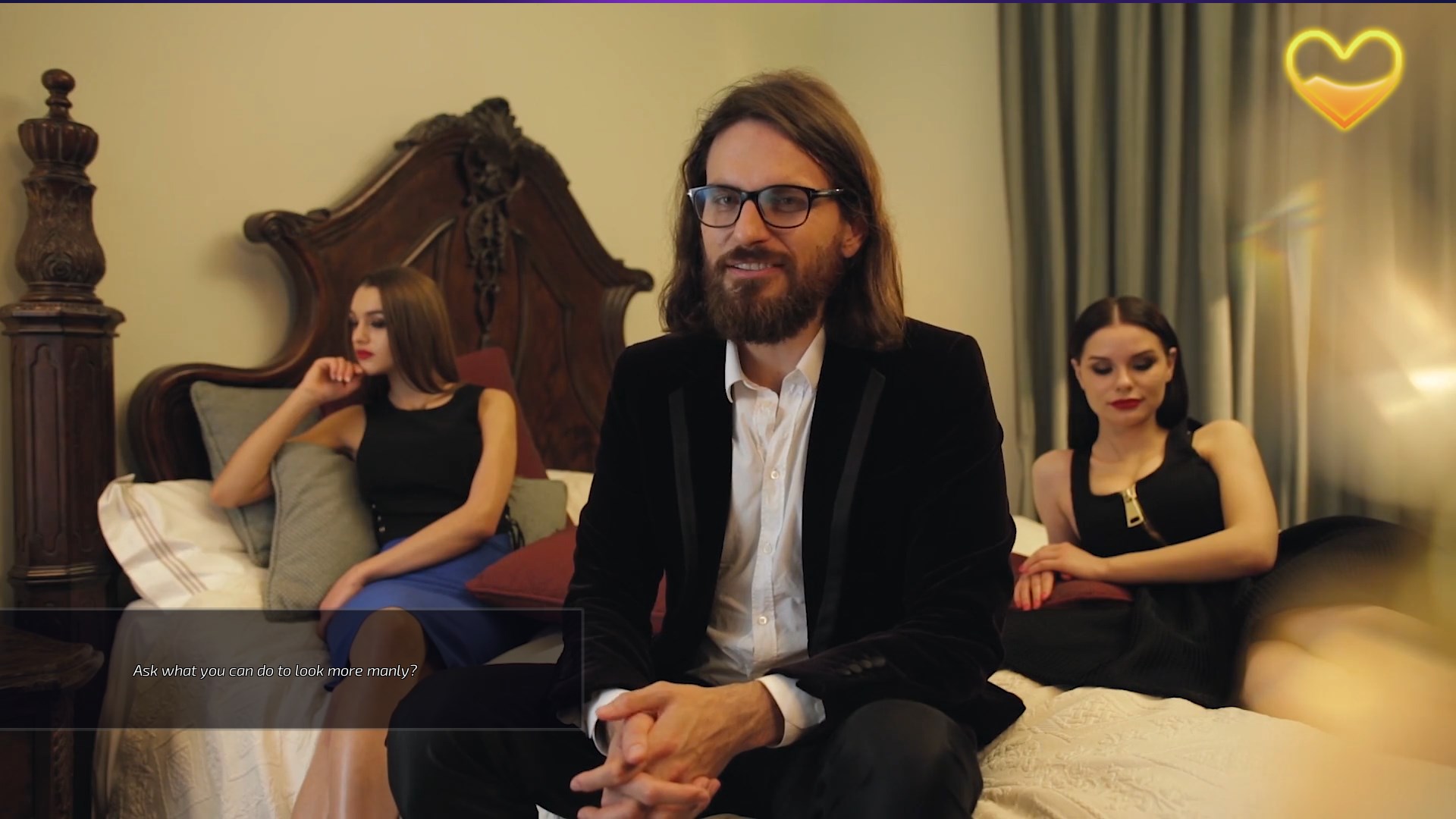 Then there is the issue with the accuracy of what Dick tells you anyway. I was reminded of a video I once had to watch which was all about body language from a so called expert. They showed a clip of someone entering an elevator with two other people in it… the person who enters walks straight in and remains facing the back of the elevator.. after a little while of looking confused the other two people eventually turn around and face the back as well. The expert boldly explained this is what will happen any time you enter an elevator with other people in it and just walk in and confidently remain facing the back… the problem is it also had a note saying that this was a performed scene with actors. Super Seducer has the same problem, it’s all very well for Dick to tell you that the line you chose was wrong or that the line you picked is right and will definitely lead to the woman liking you but the truth is it’s totally scripted and based on what he claims. I can also say for a fact that he was wrong with one of his assessments. There was one scenario in which you are given the option to ask for a kiss to which he then tells you no, that’s wrong you should never ask for a kiss. I can say for a fact that I have on two occasions asked before going in for a kiss and both occasions were very successful (I’m not the most confident and didn’t want to assume). 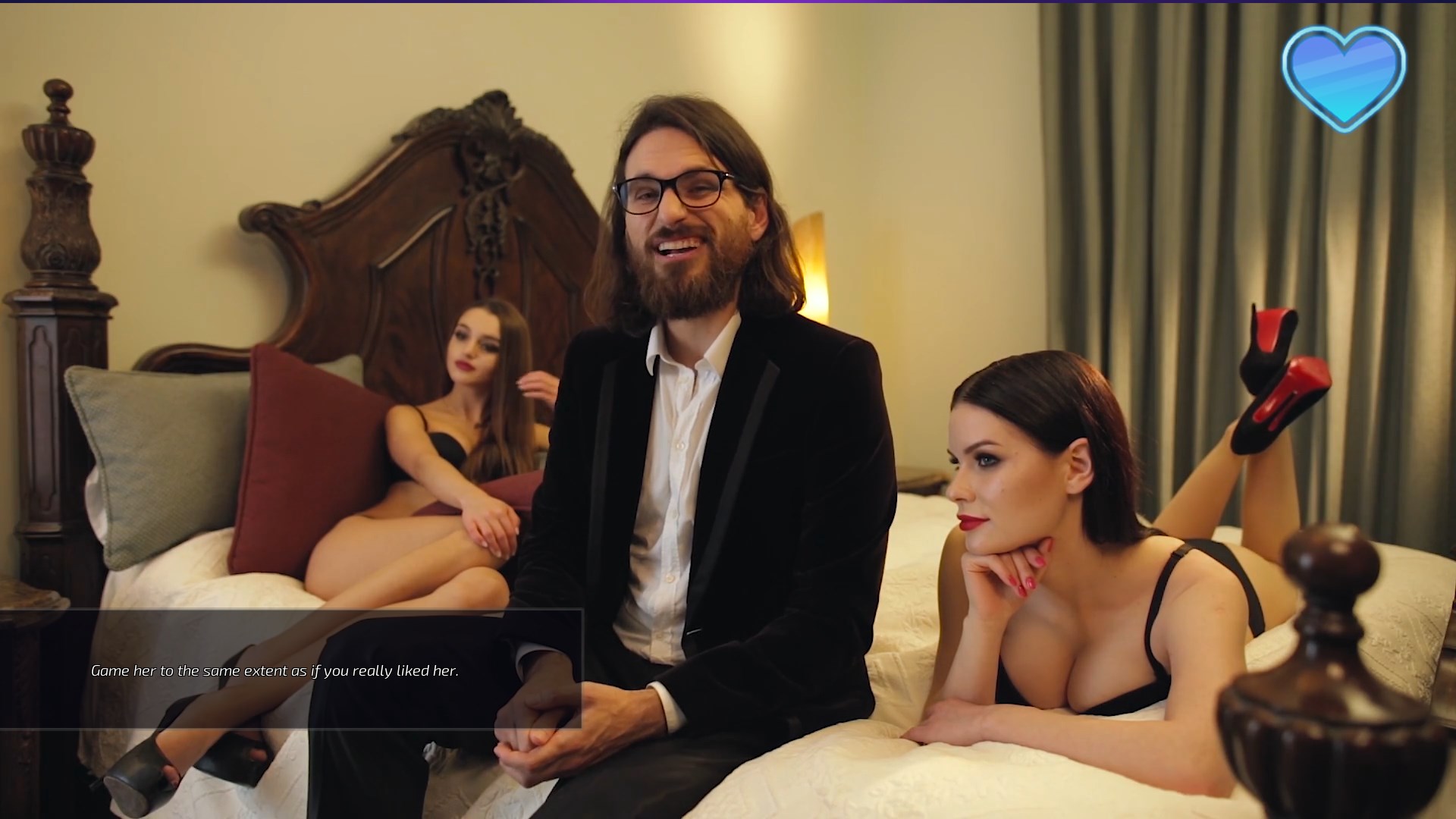 The whole experience comes across as Dick trying to sound legitimate and trying to soften the edges of his sleaziness but cracks keep showing through. I was completely over it when I had the option of choosing to delay sex with one of the women and instead opt for taking things slowly… his way of letting me know it wasn’t the option I should have chosen “What are you a girl?” That I think tells you as much as you need to know about Dick and his little “game”. 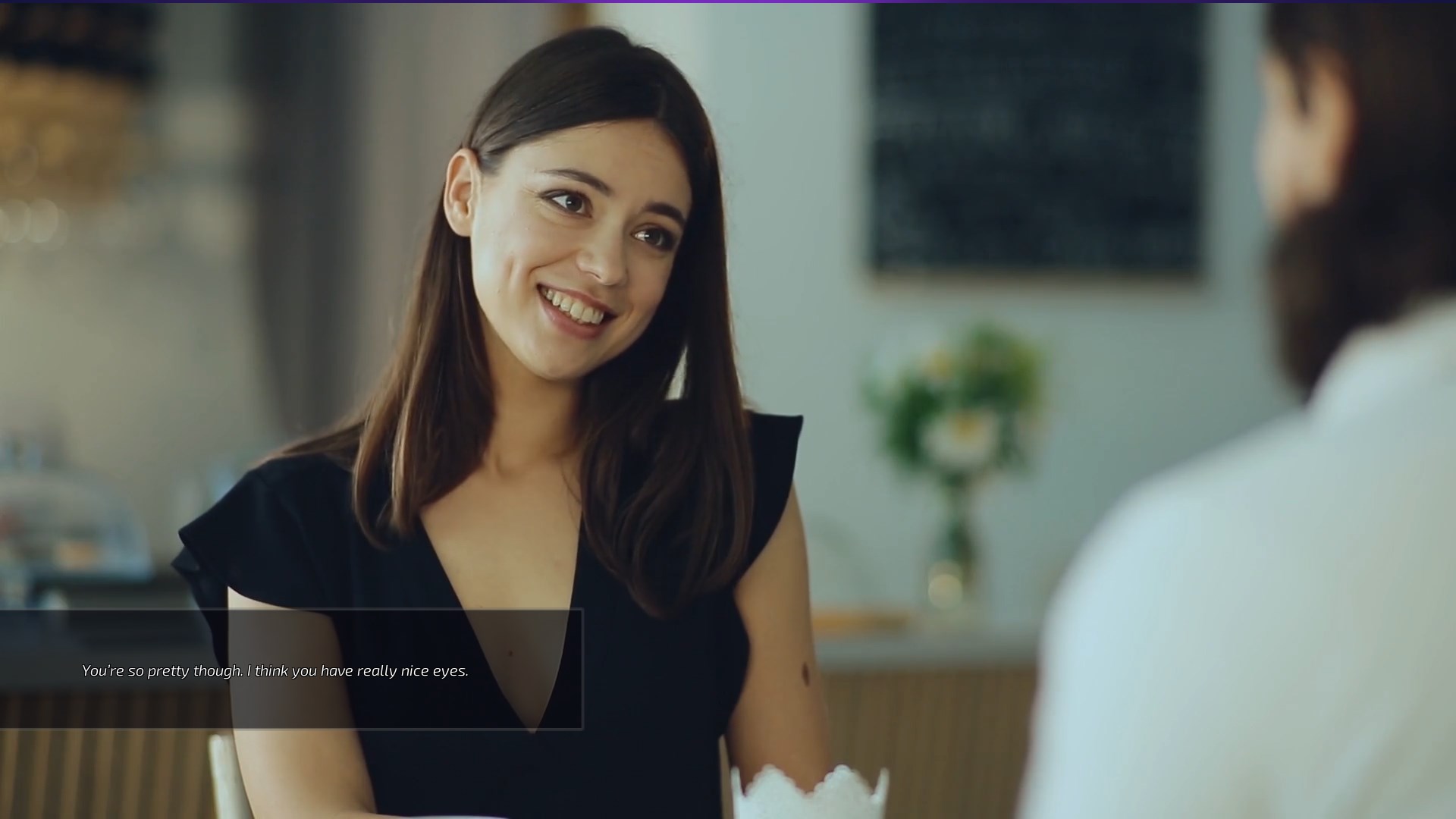 Do no buy this game… if you are having trouble with finding a girlfriend (or boyfriend or non gender conforming partner) I can give you some advice. I was still a virgin at 24years old and that was fine… I tried the dating sites and had a little success there. But the thing that ended up working for me was amateur theatre… through crossing paths on productions and finally me being in a show that she came to see (because she knew someone in the crew) I met my wife to be. Now I’m not saying you need to join amateur theatre, I’m saying one of the best ways you can find a partner is to find something you like doing and that you can do with other people… a club, cosplay group, sports what ever it is. The reason this will work is because you will be yourself… you will get comfortable in the environment and it means you and or your prospective partner will just be yourselves. Don’t put on a false image or try to be someone you aren’t… it isn’t sustainable and it doesn’t do you or your potential partner any favour.