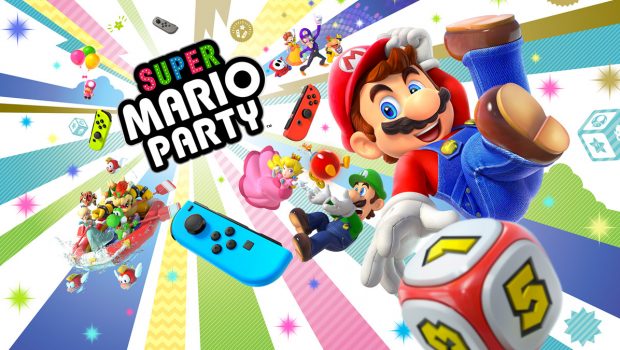 Summary: Super Mario Party represents a lot of what makes the spin-off series so fun. It has a few problems here or there but generally, it’s a joy to play.

The Switch has been home to games that have marked a return to form for their series after divisive entries. Super Mario Odyssey and The Legend of Zelda: Breath of the Wild have gained almost universal praise following the divisive 3D World and Skyward Sword. The reveal of Super Mario Party earlier this year offered hope that this trend would continue, after what has been a dour few years for the spin-off series. Thankfully, Super Mario Party does mark a return to form for the series, although it is not without its problems. 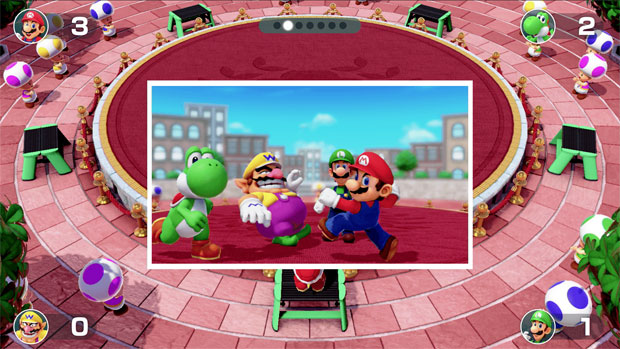 What strikes you from the off with this entry is how Nd Cube have stepped up the presentation. Whereas other recent titles have felt by the numbers, this one feels like a celebration of the goofiness of the Mario universe. When you enter the game, no longer are you greeted with a boring menu, this time, you walk around an open hub with a segment for each game type. The hub is only small, and an optional menu is available if you prefer, but it’s representative of the extra touches in place here that have been missing before.

As mentioned earlier, there are several game modes. In fact, this variation in game modes means that the disappointment of the meagre board selection is mitigated a fair amount. First, of course, is the titular Mario Party mode, and you’ll be glad to know that gone are the car and the awkward pseudo-co-op of recent entries. Instead, the board is traversed solo — classic Mario Party style. Despite it being a return to normality in that sense, there is a twist added to the formula which works exceptionally well; this is the introduction of personalised dice blocks for each character. This change allows for some strategy from the moment you choose your character as some dice blocks are high risk, high reward while others offer an almost guaranteed three or four. 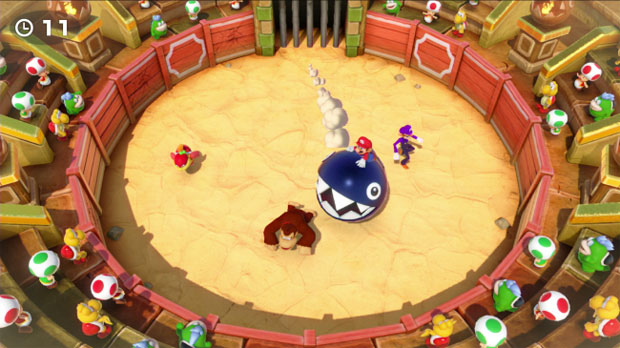 If you want a Mario Party experience with a difference then Partner Party has you covered. This 2v2 option is similar to the formula used in the recent handheld entries of the series. However, here the maps are altered to be more open and now take up a grid-based design. Due to this it actually offers an experience which differs substantially from the standard and offers some great fun if you have a friend on your team. While this mode wouldn’t be recommended by any means for solo play, it offers a nice change.

To call Mario Party’s formerly used car mechanic divisive would be charitable. It is clear with this entry that fan demand has led to Nd Cube reintroducing the classic Mario Party formula. Despite that, new mode River Survival takes the best elements of that mechanic and introduces them into a separate mode that feels entirely different from the traditional game, in all the right ways. Simply put, four players co-operate to reach the end of a river unscathed; the better you do in mini-games the more time you gain against the ticking clock. To trigger mini-games you must hit floating balloons that will appear on your journey. Doing this is often tougher than it sounds due to the occasional AI stupidity. The mode is a fun co-op experience, with the co-op mini-games being some of the best on offer, and coming in quick succession of one another. The pace is much faster than the other previously mentioned modes and tensions can get high when trying to navigate the river. It’s a welcome addition that cuts out some of the sluggishness of other game modes. 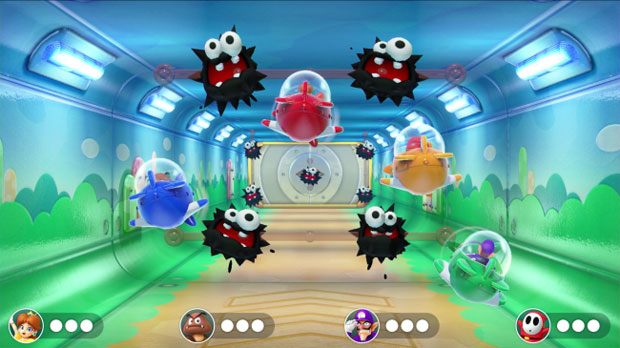 Toad’s Rec Room is an interesting mode, it caught the eye in the reveal trailer when two Switches were seen working together in one mini-game. The titular rec room is filled with a set of games that are slightly too substantial to just be a game you play on the end of a round in a standard game. The key word here being slightly. This mode is a mixed bag: while many of them are fun jaunts, and interesting ideas, they won’t hold your attention for too long; without an overarching reason to play, you likely won’t be coming back time and time again. The good news is that all but one of these games is playable on a single system, which saves you from a barrier to entry reminiscent of Final Fantasy Crystal Chronicles.

Mariothon is next up, and it’s the only mode in the game to be available both locally and online. You’re put through your paces in five mini-games against other competitors. The worry with this mode when originally announced was that without the board game, the series’ online debut would be largely pointless. Thankfully, the introduction of a gameshow format adds a bit of charm and structure to proceedings. The cheesiness is appreciated too. 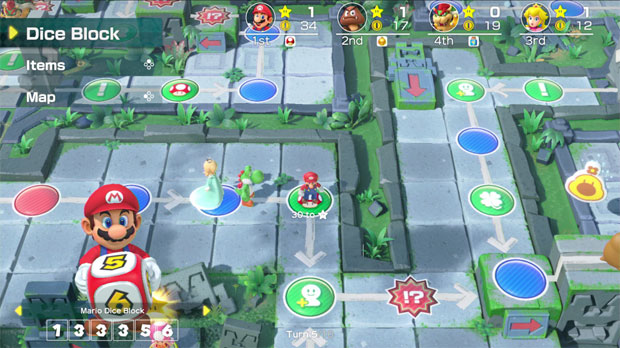 Sound Stage is the next offering: a game mode which can be completed in no time but is an absolute joy while it lasts. You play through several rhythm mini-games at a time, all of which are fun. Plus, if you play as Monty Mole during whack-a-mole he visibly panics at the prospect, that is worth the price of admission alone.

Last, and quite possibly least, is Mario Party’s effort to create a single-player experience – Challenge Road. This mode offers up mini-games with certain objectives to achieve. Unfortunately, many of these objectives are as basic as reach a certain score or finish in a certain time. Subsequently, there is no motive to play the mode. There’s nothing new on show here. 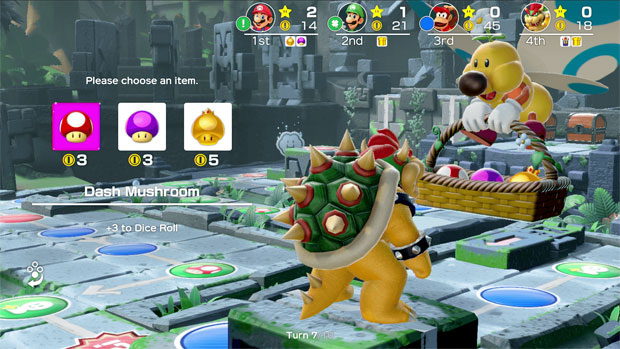 Visually Super Mario Party looks a step above anything the series has offered before. If you’ve seen the visual quality of other Mario games on the system then you know what you’re in for here. It truly is the best you’ve ever seen a Goomba look, although whether that’s a positive or not, I’ll leave to you. The soundtrack consists largely of songs that you’ll have heard countless times before, but don’t fix it if ain’t broke, I suppose.

Also, one thing that should be mentioned is that the mini-games on show here are top notch. Not every game is a home run, with 80 on offer that was never going to be the case, but there are some stars in and amongst. In particular, games like Slaparazzi and Nut Cases rank amongst the best the series has to offer.

The game is not without its flaws though. First and foremost, it has zero respect for your time. Firstly, there are unskippable animations that take annoyingly long; I can only watch Toadette slowly float across the map so many times before I grow bored. This game also suffers from a problem that befell Nintendo Land, that being constant prompts for whether you want a tutorial. However, most egregious of the time wasting is the forced high five you’re forced to do at seemingly every opportunity: when you start the game when you start on Partner Party when you win a mini-game in co-op – they all prompt it. The first time you do it, it’s novel, but the 50th time you do it? Not so much. 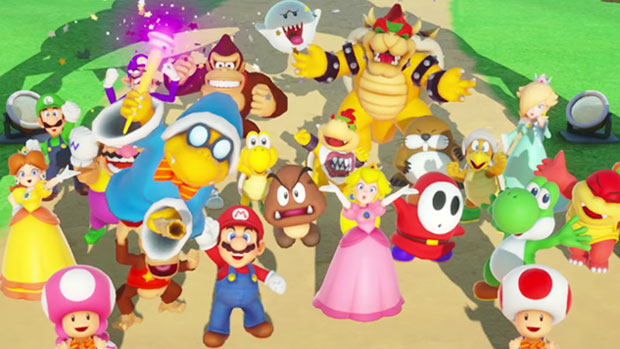 Super Mario Party is, without doubt, the best entry in the series since the days of the GameCube. It’s stellar presentation, kooky sense of humour and fantastic mini-games make it for an exceptionally fun party game. Also in the game’s favour is that there is variation in the game mode’s hitherto unseen in a Mario Party. The game is plagued by a lacking amount of boards and a sometimes painfully slow pace but on the whole, there’s a fantastic multiplayer experience in there. This entry is good fun, but the foundations are there to make something sublime with a sequel. If some form of enticing single player is added and the bumps present here are ironed out, a Super Mario Party 2 could be something special. 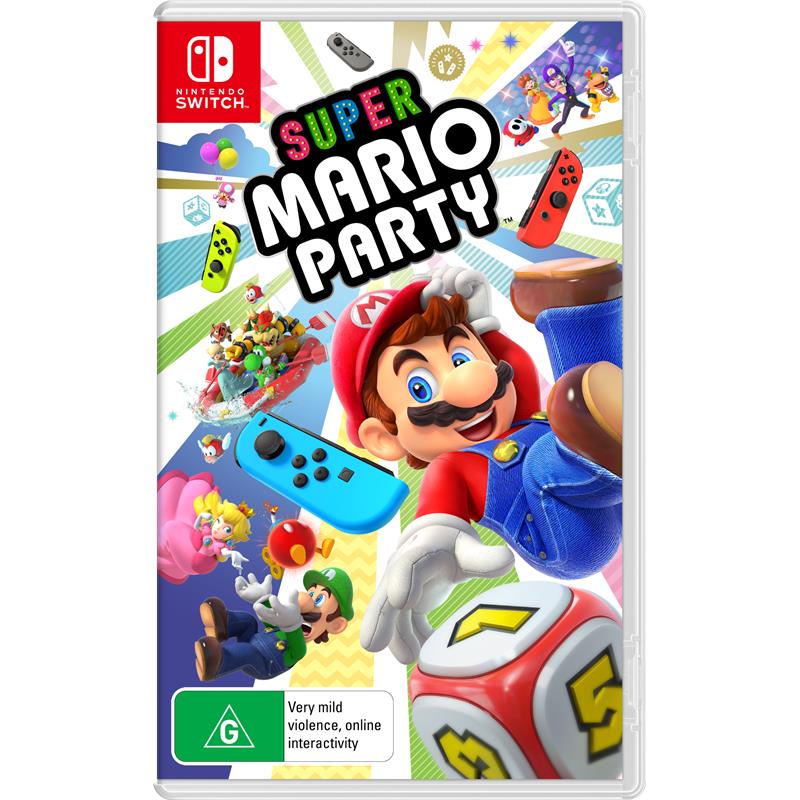