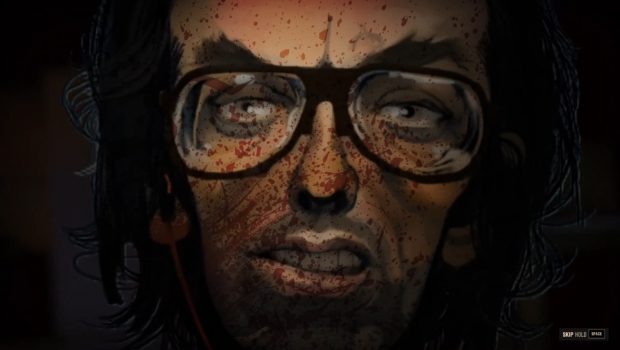 Summary: Sunday Gold is a pretty decent turned-based action RPG with an acceptable story that carries the player until the end but there is so much lost potential in it as well.

Sunday Gold is the latest action-turned-based RPG made by BKOM Studio. The game is set in a Cyberpunk version of London in 2070 where you take control of a group of thieves that decides to steal the information of a big corporation that replaces genetic parts with its unique metallic and intelligent parts of not humans, but dogs. This is a good change to see animals also being changed in the Cyberpunk world of Sunday Gold, but unfortunately, that is where it ends.

The art style of the Sunday Gold looked very promising before playing the game and it delivered what it should have. The comic style of the game with its Disco Elysium-like painting is quite fascinating and something to thank Disco Elysium for. I wished I could see more of the Cyberpunk theme of London. It is a lost potential that really could have helped the depth of the story. 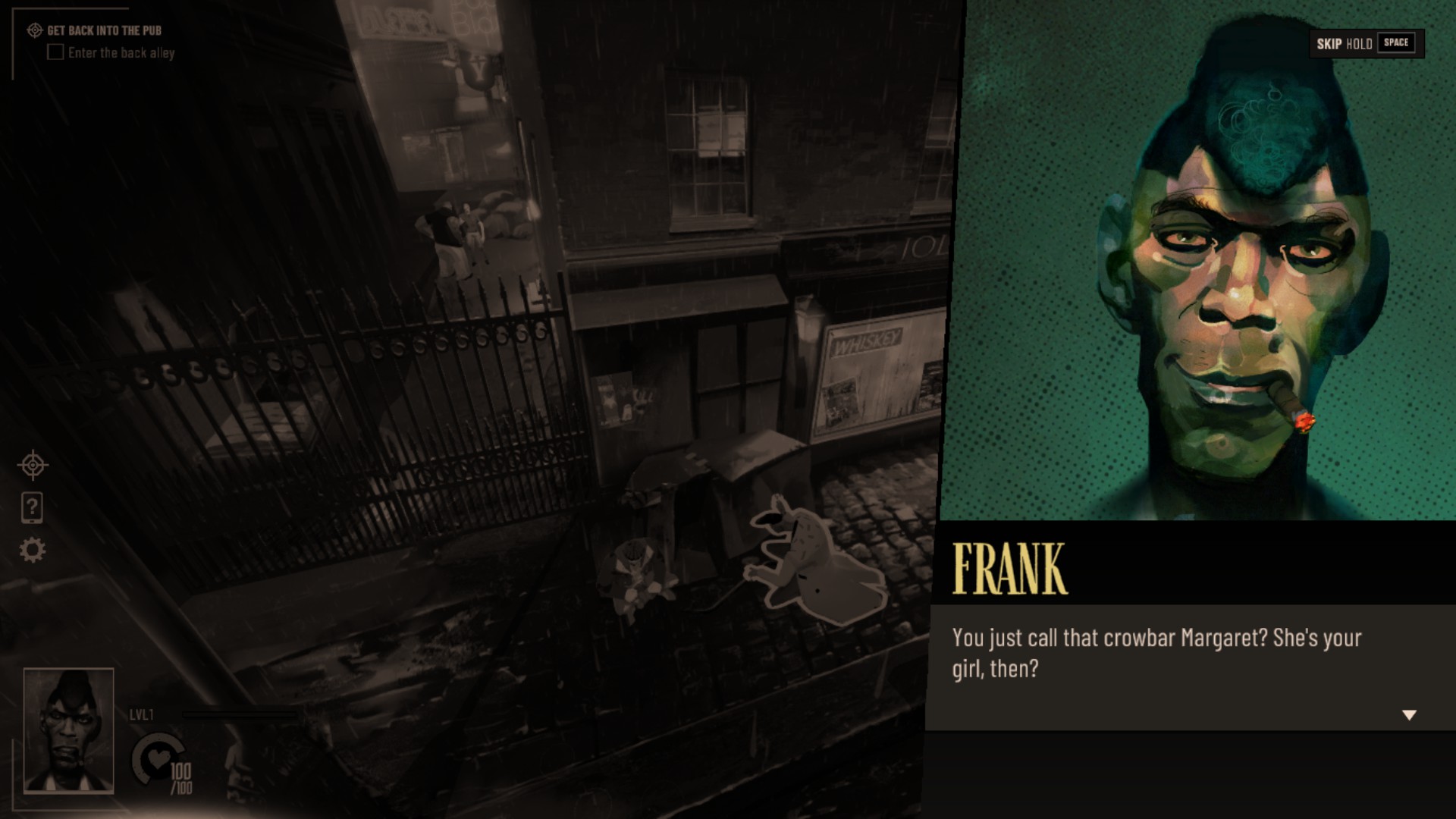 Speaking of story, the game starts as you take control of Frank, a modern-day Robin Hood who steals from riches and gives to the poor. After playing for a little bit, you will get introduced to his partner of crime Sally who brings another geeky guy, Gavin, who doesn’t know anything about stealing and yet decides to help these people bring down the mega-corporation, Hogan Industries, where he used to work for.

The story starts very well and after a while, you get your hope high for something rich, powerful, and deep. But as you progress you realize to lower your expectations from the game. This is also because the game obviously is inspired heavily by Disco Elysium, and when the name of the Elysium comes to mind you expect a piece of art that is philosophical or at least a critique of politics or in the case of Sunday Gold, a critique of mega-corporations.

It seems at first that the game tries to say something different and unique that hasn’t been explored in the Cyberpunk world of video games, but as you progress, it becomes another mediocre story. It is not that you will abhor the story or get sick of it, it does what it’s supposed to do. It is engaging and will carry the player to the end, but it is not something that will leave you starstruck. 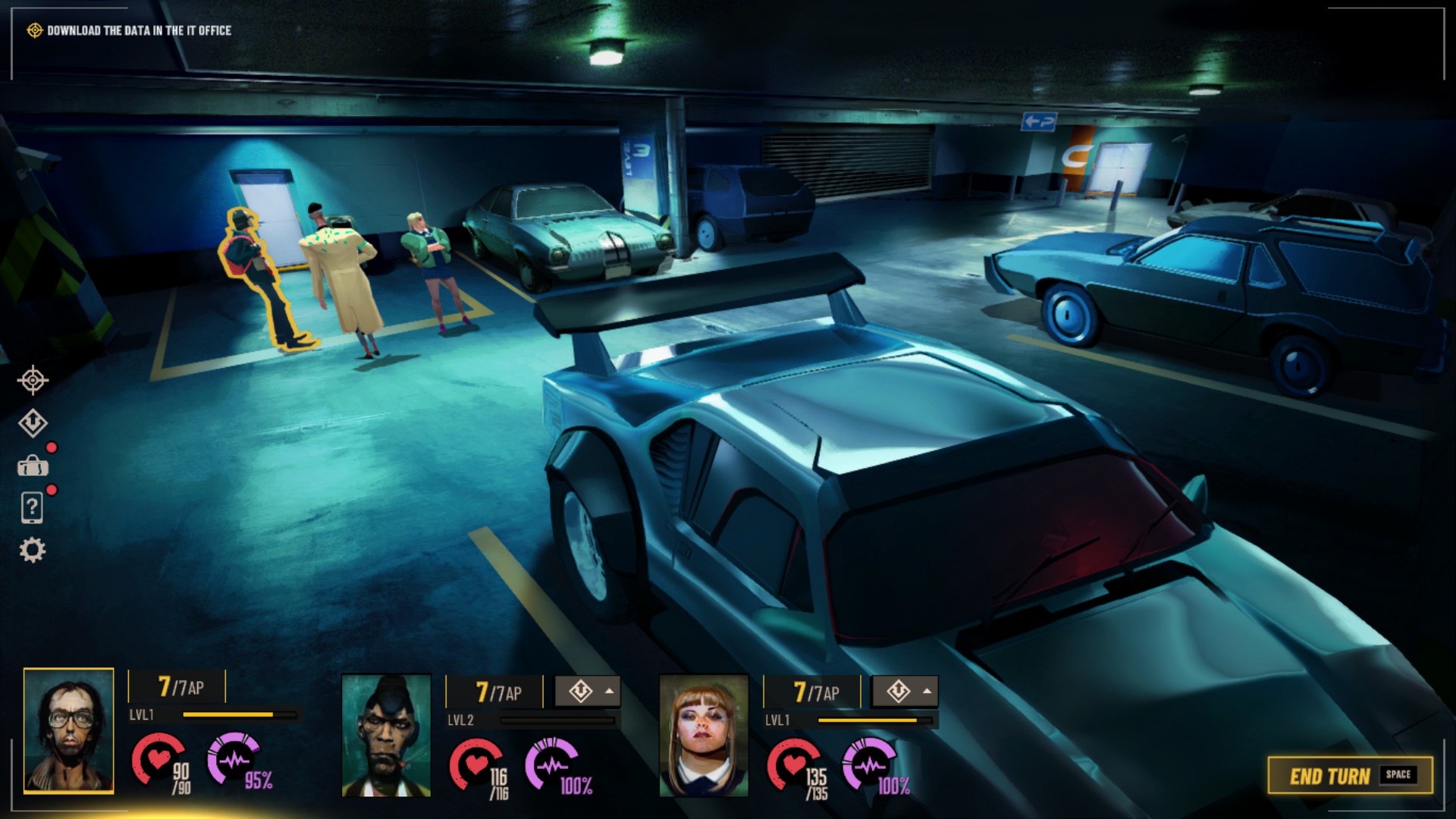 But the story is not everything about a video game, the main reason everyone plays them is to enjoy the gameplay. The gameplay of Sunday Gold has two parts: the point-and-click part and the turned-based combat.

The game uses the point-and-click part of the game very well. One of the things that might player not enjoy a lot is that game doesn’t help you. It just gives you the objective you must complete and then it is all up to you to find your way. This way you will have to check every corner, every closet, and every drawer, so you won’t miss anything.

Then comes the places you will have to unlock something by hacking or lock picking and even destroying something. To do each of them you have to select the character with the specific attribute. For example, Frank has the skill to lockpick everything. By selecting the thing you want to unlock, the mini-game will start, and depending on the lock, it would be easier or harder to pick the lock. The other attributes are to hack computers or keypads and pick or destroy heavy objects.

The mini-games are one of the best things in the game. It’s not only fun to play them but also plays a huge part in preventing the game to be a boring point-click game. And that’s not all, you have to keep an eye on the Action Points of your characters as well. Once the Action Points reach their limits, you have to pass the turn which will either end up in guards being alerted or finding you and you have to defeat them. 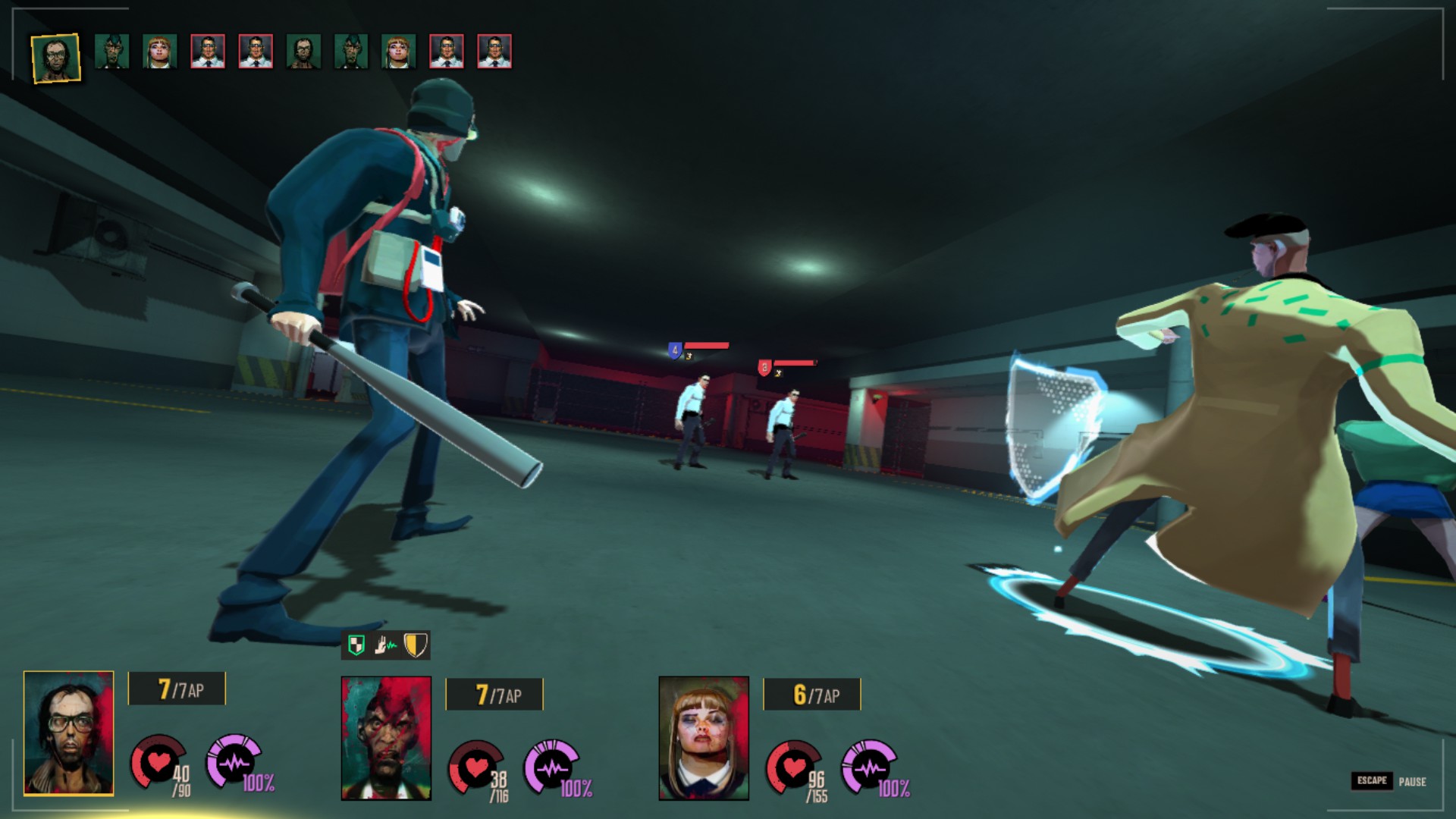 That’s where the real fun starts. The classic turned-based combats where you have to manage the health, morality, and Action Points of your characters and also manage to destroy the enemy standing in your way. The management will require serious skills because your characters’ Action Points and health will not reset before combat or even after. You easily end up in a hell-loop where you start combat, end it with low Action Points, give up the turn and see yourself in another combat.

Speaking of combat, it doesn’t happen much to see a person like me who doesn’t even go near turned-based combat enjoy every bit of it. One of the reasons that I could enjoy and instantly know what I’m doing is the game’s fantastic UI that made me click with every mechanism of gameplay instantly.

Each character has a unique set of skills that can use to defeat the enemies. As you progress through the game you can grab other weapons by solving a puzzle or looking around. It’s not just about the guns either, there is a skill tree for each character that you can use, and by leveling up new skills will be unlocked.

I was surprised and also happy to see a smaller and more useful skill tree in Sunday Gold. In recent years I’ve seen so many games putting huge skill trees that are so overwhelming and at the end of the game, you realize you didn’t use even half of the skills you unlocked. This is not the case with Sunday Gold, because there is no extra skill that you “might” or “might not” use. Each skill you unlock or upgrade will be used eventually in the game.

When it comes to the full experience of a video game, music and sound design have a huge impact on it me. As I was playing Sunday Gold I appreciated how much effort was put into the sound mixing and editing of the game. The attention to the smallest detail in sound editing made the experience much more authentic in general.

Although I wished the music of the game were more memorable. The cyberpunk theme is a great and rare opportunity to show off some of that synth-wave music we fill missing. It would have made the world of Sunday Gold and its futuristic London more understandable and real.

Sunday Gold is a pretty decent turned-based action RPG with an acceptable story that carries the player until the end but there is so much lost potential in it as well. The art of Sunday Gold on the other hand fits its world perfectly and we can see the first legacy of Disco Elysium art style in this game. The gameplay of Sunday Gold is pretty straightforward and fun, something we don’t see much these days. I wished they made or used better music for the game, but it wouldn’t be right to not point out the fantastic job the sound editor of this game did. 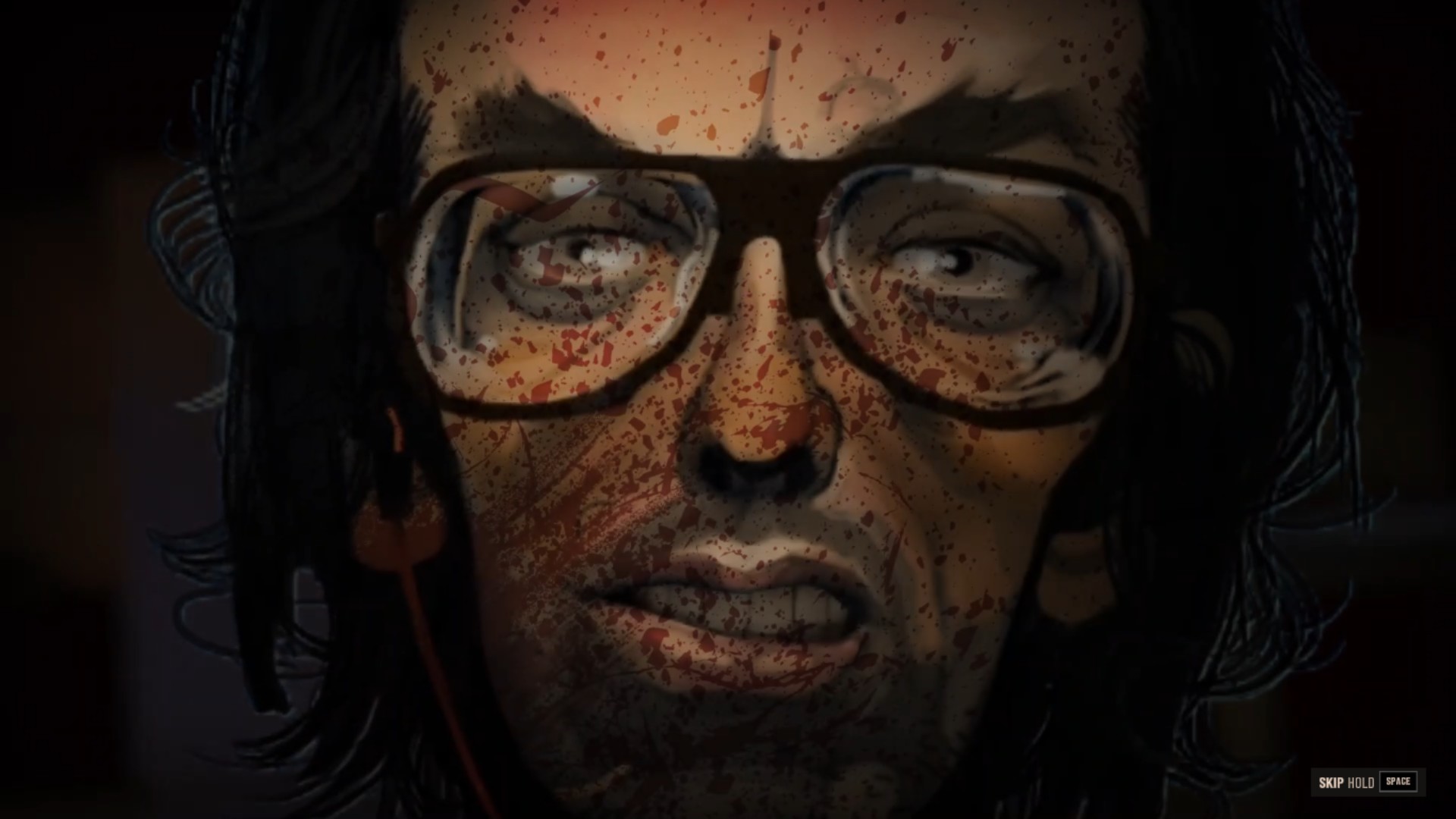