I’ve always found Hell to be a fascinating setting to explore in video games, given its potential to disturb or offend. From Doom to Diablo to Hellblade, there have been many interesting attempts at depicting the horrors of the darker side of the after-life – usually accompanied by large amounts of violence.

Succubus, from the creators of 2018’s Agony, offers a well-detailed, unique take on Hell that genuinely comes across as terrifying and otherworldly at times. It also features a level of uncensored nudity and ultra-violence mainstream titles wouldn’t dare touch.

So, does its premise of pulpy violence, unrestrained sexual content and horror landscape work?

Succubus is played as a first-person hack-and-slash experience with a heavy emphasis on visceral melee combat. As Vydija, a sultry-toned, blood-thirsty succubus of lust, you will literally tear through hordes of fleshy creatures, demented demons, tortured humans and lordly hellspawn in a series of 20 or so stages with varying objectives and collectibles, but where the solution for completion is always the same: Maiming, mutilating, and killing everything between you and the exit.

To accomplish this, there is a variety of melee-focused weapons and magical spells on offer that steadily unlock throughout the game. From daggers to axes to hammers to pitchforks, each provide a different moveset to experiment with, and, akin to recent Doom titles, special finishing moves that can be activated after dealing enough damage; using these rewards a gory animation that, while janky-looking, certainly delivers on the shock and laugh-out-loud factor. You can find many of these weapons in the hellish landscapes you cut your way through, or buy them (along with a number of revealing and disturbing armour set pieces) by spending collected souls. 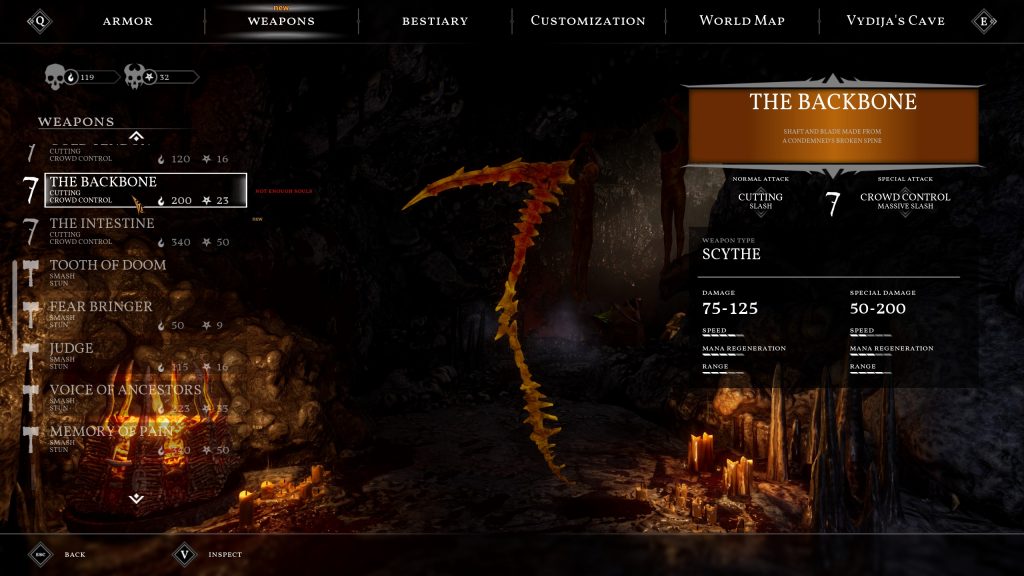 There’s many spells to equip and unleash, too, with new abilities and ways to kill enemies unlocked as you progress, though many, including the starting telekinesis and fireball abilities, feel like it needed more tuning. You can also dash in and out of fights, and Spartan kick enemies into environmental objects such as spikes or other hordes with a button. While entertaining, there’s a lack of polish in the combat and impact in attacks overall that makes it feel a bit floaty.

Succubus really doesn’t hold back on depicting the sheer level of damage and pain you inflict upon your foes. This is a main selling point of Succubus, and I can’t say it doesn’t deliver the gore-ey goods. Every interaction is hyper-violent, and you’ll see the full non-censored results of cleaving, stabbing, crushing, slashing and impaling your enemies. In particular, the mutilation of bodies is supported by the game engine to a surprising degree. Whether this level of detail is entertaining or disturbing depends on the player; for me, the slaughter comes across as so ridiculous in tone it’s enjoyable in a ‘dumb fun’ sort of way, though it’s not for the faint of heart by any means. Even if you play violent games, what’s on display can be voyeuristic – especially one animation involving pregnant sinners and fetus’s, which may cross the line for some players. But others, like ripping a sinner’s penis clean off, or drinking the blood of a sinner to regain health, ground the game into pulpy, laugh-out-loud parody. 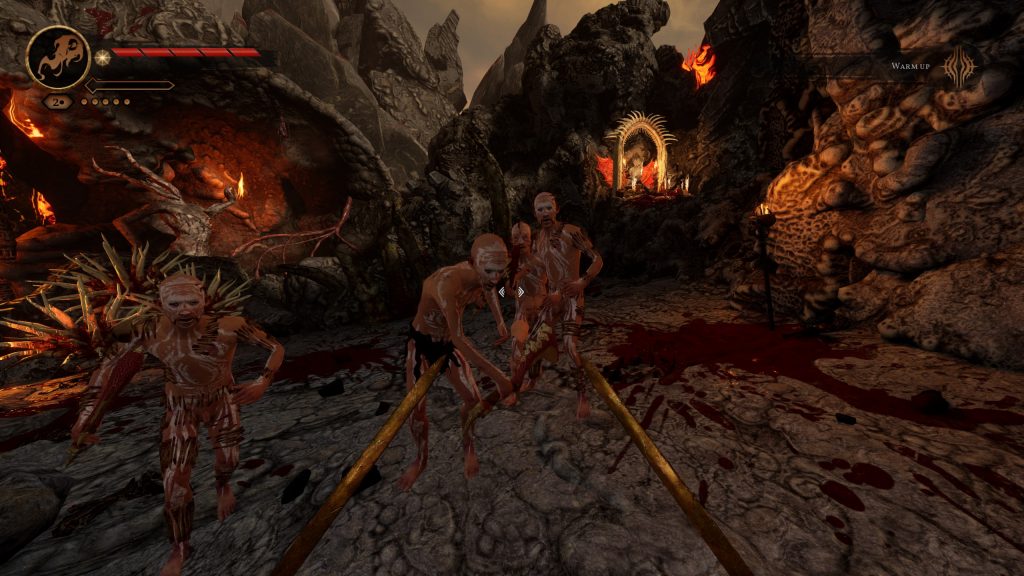 It’s a good thing there’s a lot of effort put into the weight and impact of your attacks, though, because the arena-based combat approach of Succubus, after the opening hours, becomes repetitive fast. You’re practically swarming in waves of fleshy, flying and grotesque things to kill each level, but the majority of the enemy A.I. with the exception of the bosses (one makes the floor full of lava, another has a hilariously large penis to distract you from plenty of hard-hitting attacks) tend to be rather bone-headed, running at you with suicidal mania and little thought for tactics. I suppose it fits with the setting of Hell, but clubbing enemies around like they’re golf balls with my warhammer is only fun for so long. On higher difficulties, it feels like most enemies just do more damage than present a larger challenge, or a truly tangible threat. The arcade-like combat, for better or worse, is very simple.

It falls to the aesthetic and visuals of the game, then, to hold these duller moments up, and for the most part Succubus presents an intriguing and unique depiction of Hell compared to other games. The monsters you fight all have visually grotesque designs and interesting lore cataloged in an in-game bestiary, and the environments you stalk your way through are more than just fiery brimstone, but truly disturbing satanic shrines and infernal monuments to darker, greater threats, with tortured sinners and lost souls writhing in agony or on display in sickening circumstances. All this is brought to life by Unreal Engine and higher quality graphics than would normally be expected from an indie title, with high-resolution textures that uplift the excellent artwork. The humanoid character models, though, outside of Vydija, are very hit and miss, either looking appropriately terrifying or just plain terrifying (some early enemies betray the game’s budget). 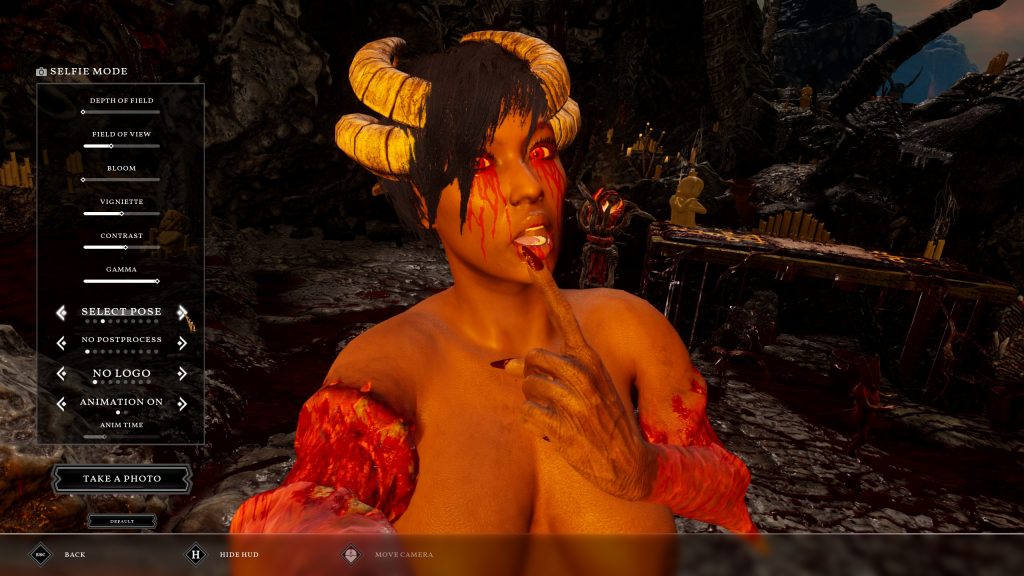 Of course, the big push of Succubus seems to be its inclusion of heavily sexual elements wrapped around its ultraviolent imagery. Nudity reigns supreme among the hordes of enemies you’ll face, as well as background NPCs engaging in debauchery or slaughter of their own in clear, uncensored view (unless you toggle censorship, which, let’s face it, most won’t). After the first level, you’re given a basic number of customisation options to shape Vydija’s appearance, such as facial sliders, type of demonic horns, breast size and weight, and a photo mode to capture shots of your dream succubus, though they seem to make her pose like a porn star rather than a demonic monster. The home-base you start missions from allows you to engage in various environments to set up cinematic snuff shots of your demoness, and even customize the way the backdrops look as you progress. 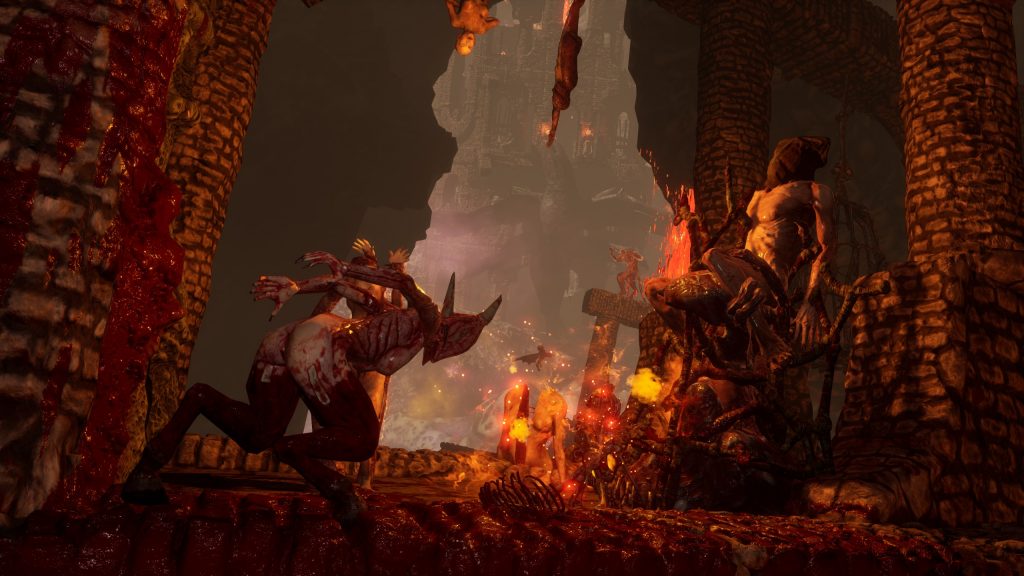 I’ve mentioned most of what Succubus entails and what works, but now for the less positive part of the review: the game nails the atmosphere of hell excellently, provides a lot of ‘dumb’ fun combat and a small amount of provocative nudity, but it falls just short of a well-rounded package. This isn’t ‘Doom with boobs’, as some reviewers have called it – the combat and impact of attacks is just too mindless and floaty to feel as satisfying as the violent animations look, and the story and writing is laughable.

There are ties to preceding game, Agony, but it can be summarised as one asshole demon (Baphomet) threatening another (Nimod) and their reign, with the latter’s queen Vydijia spouting cringe-worthy threats to kill everyone who betrayed her in her way (though Karen Strassman portrays the smokey-voiced demoness and her ridiculous C-movie dialogue excellently). If you’re like me and need a good story to keep motivated, you won’t find it here, which is a shame given the interesting Hell lore. 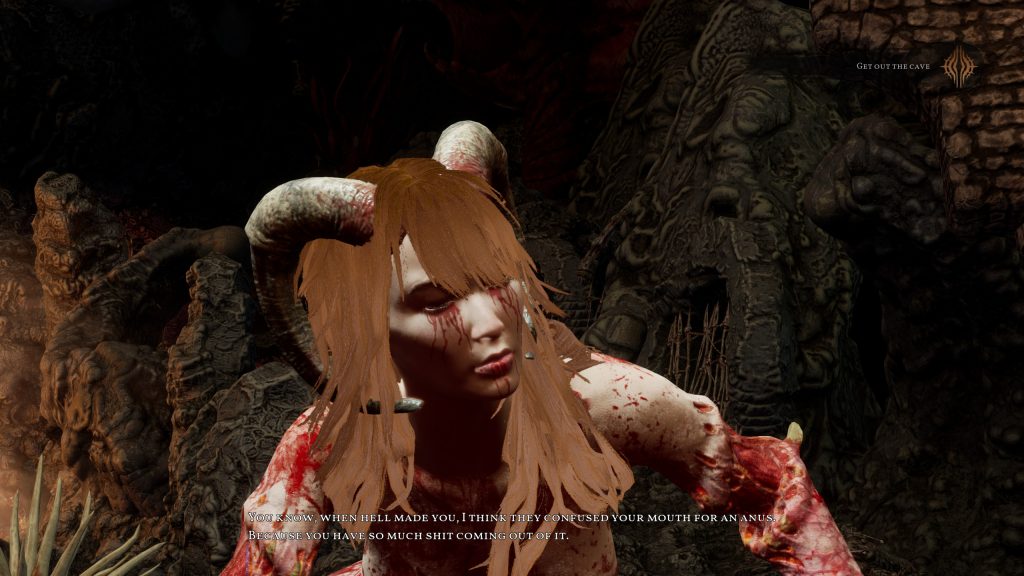 I had a lot of mindless enjoyment from the game’s unique depiction of Hell, but don’t assume the same sophistication in combat and story as other, comparable mainstream titles. It’s clear there’s a formula that can continue to be refined in future updates and titles, however, and I am keen to see how developer Madmind Studio builds upon Succubus’s foundation and unique take on Hell – perhaps with a little more time cooking in the fire pits. 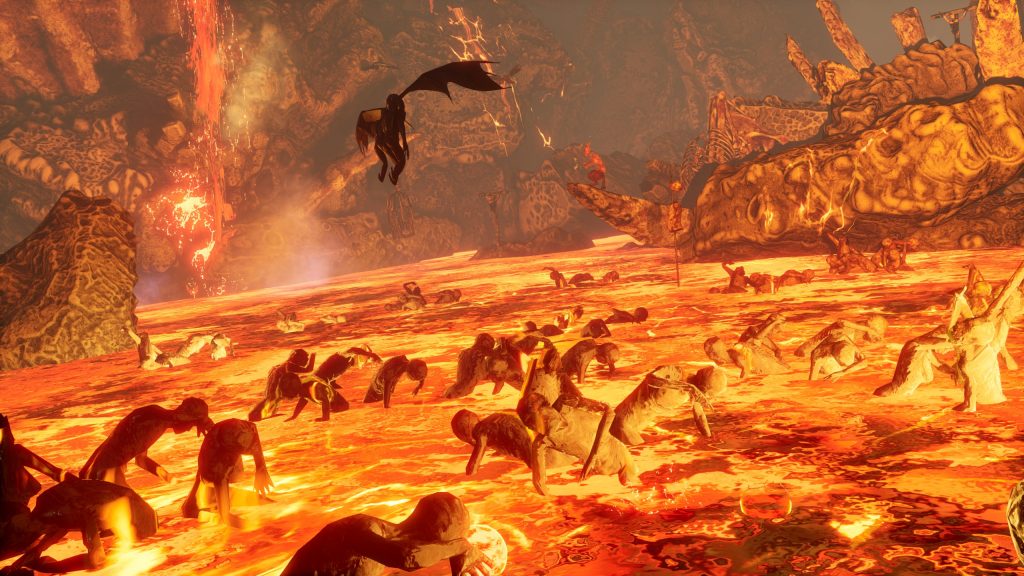