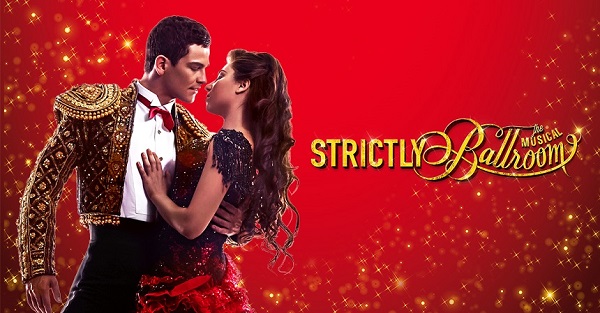 The first UK staging of STRICTLY BALLROOM THE MUSICAL – based on the much loved film that inspired the world to dance – is to premiere at West Yorkshire Playhouse, Leeds on Wednesday 30 November 2016, playing a season through until Saturday 21 January 2017 (Press Night: Tuesday 6 December at 7.30pm).

Drew McOnie (In The Heights, Hairspray) will direct and choreograph the production, which is based on the original Australian musical created by Baz Luhrmann and Catherine Martin. Terry Johnson joins the creative team to adapt the original book.

Baz Luhrmann said: “One of the great joys for us was to take a story that began as a play when I was at drama school and return to our homeland in Australia to birth the musical stage version with all our original collaborators. Now that it’s been born, Strictly Ballroom must go on. It’s wonderful that one of the new bright-lights of the English theatre, who himself was fan of the film at a young age, is taking the show to realize it in a new way, for new audiences, and oversee its continued growth. “

Drew McOnie said: “The film Strictly Ballroom has had such a huge impact on me. It inspired me as an 8-year-old dancer to follow my choreographic instinct and gave me the desire to explore the many different ways of communicating ideas through dance. The opportunity to bring that passion and personal connection to the next stage of Strictly Ballroom’s journey means the world to me; and having Baz Luhrmann’s support is a dream come true.”

STRICTLY BALLROOM THE MUSICAL is the inspiring story of a championship ballroom dancer who defies all the rules to follow his heart. It features break-into-song numbers such as Love is in the Air, Perhaps Perhaps Perhaps and Time After Time, as well as several wonderful new songs by internationally acclaimed artists including Sia, David Foster and Eddie Perfect.

STRICTLY BALLROOM THE MUSICAL is a co-production by Global Creatures (the team behind Walking With Dinosaurs – The Arena Spectacular, How To Train Your Dragon and King Kong) and West Yorkshire Playhouse, who most recently co-produced James Brining’s critically acclaimed production of Chitty Chitty Bang Bang, currently on a major year-long tour of the UK and Ireland.

Carmen Pavlovic, CEO, Global Creatures said “Baz Lurhmann’s Strictly Ballroom is such an important touchstone for so many of us and creating the new musical with Baz and Catherine Martin in Sydney was a joy. Now I am so excited that STRICTLY BALLROOM THE MUSICAL will debut in England in partnership with the creative might of West Yorkshire Playhouse in Leeds and helmed by Drew McOnie. Baz and I were thrilled to discover the dazzling Drew McOnie who is a brilliant talent and I believe the perfect person to continue building on Baz and Catherine’s vision and remarkable achievement.”

James Brining, Artistic Director of West Yorkshire Playhouse, said: “’We’re delighted to be collaborating with international producers Global Creatures to create the next incarnation of STRICTLY BALLROOM THE MUSICAL. I have loved the film since I first saw it in and I’m thrilled that we will be working with a world class creative team here in Leeds and creating the first UK staging of this musical for our 2016 Christmas show.”

STRICTLY BALLROOM THE MUSICAL made its world premiere at the Sydney Lyric Theatre in April 2014, followed by seasons in Melbourne and Brisbane in 2015. This spectacular show, a kaleidoscope of colour and fun, now promises to have UK audiences dancing in the aisles!

This uplifting and courageous tale originated as a stage play that Baz Luhrmann devised with a group of students at the National Institute of Dramatic Art, Sydney, Australia, in 1984. The film was discovered at the Cannes Film Festival, where it was the winner of the Prix de Jeunnesse and runner up for the Palme D’Or. When released in Australia, Strictly Ballroom swept the field at the 1992 Australian Film Institute (AFI) Awards, gaining 13 nominations and winning in eight major categories. It also won three awards at the 1993 BAFTA awards, received a 1994 Golden Globe nomination for Best Picture, and eventually went on to become one of the most successful Australian films of all time, earning more than $80 million at the box office.

Baz Luhrmann said: “From a small student play to my first motion picture and now a theatrical stage musical, Strictly Ballroom has been an almost thirty year journey for me. I have often marvelled at how this story, born so long ago, has been in my life for so many years and has managed to touch, move, entertain and uplift so many different people from so many different backgrounds.

“I think the simple truth is that, despite all the sequins, outrageous hairdos and classic Hollywood musical plotting, the simple message that ‘there isn’t only one way to cha cha cha’ and that ‘within us all we have the true potential to dance through life with our own steps’, is something that appeals to all of us. The message that life doesn’t have to be strictly ballroom is something I hope our audiences will carry with them as they dance down the aisles.”

Drew McOnie will direct and choreograph STRICTLY BALLROOM THE MUSICAL. His theatre credits include Bugsy Malone (Lyric Hammersmith), Oklahoma! (National Tour), The Sound of Music (Curve Theatre, Leicester), Hairspray (National Tour) In the Heights (Southwark Playhouse & Kings Cross Theatre), and Chicago (Curve Theatre, Leicester). He is currently creating a brand new dance thriller production of Jekyll and Hyde, which will premiere at the Old Vic in May 2016.

Further details of the production, including casting, to be announced.