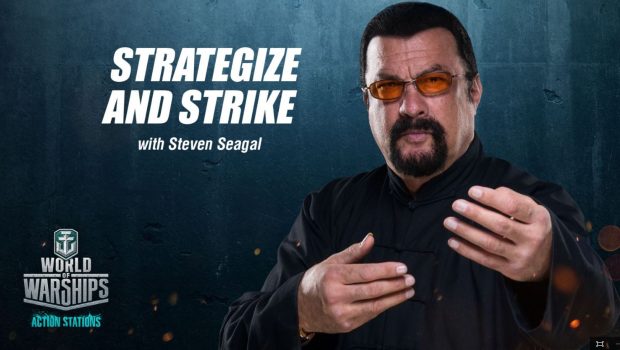 Strategize and Strike with Steven Seagal in World of Warships

November 2, 2016 — While Steven Seagal may have had a complicated relationship with warships in the past, he’s learned a thing or two about them. Now, he is braving the seas of World of Warships, letting players earn him as an in-game Commander for their vessel in a unique event.

However, Steven Seagal won’t command just any old ship. In the event, which begins November 1 and lasts until December 14, you need to prove that you are a worthy action hero. When you are at Account Level 10, your final trial awaits in the form of a special mission: amass 70,000 XP in Random, Ranked, Team, or Co-op battles. Once you’ve smashed through that milestone, Steven Seagal will be enlisted into your crew.

Just think of what you could accomplish with his husky voice; his decades of battle experience; his quiet, confident aura that would echo through the decks of your ship? With Steven at your side, you could become more powerful than you ever thought possible. You could be the next great action hero.

Steven’s not finished with World of Warships yet. You can expect more fantastic content on its way in the near future. Keep your eyes glued to the porthole.