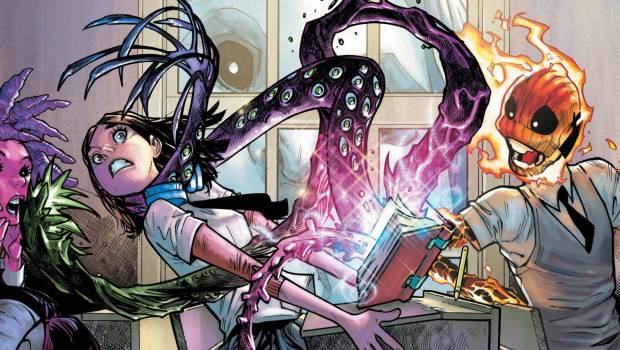 Summary: You may think your school sucks but at least your teachers can't send you to actual Hell.

The students begin their first full day of magic classes with many adventures including many they have to solve without using magic and one student seemingly being evaporated for turning up to class late. Things are brewing however when one of the student asks about “the cost” of them using their magic while studying at the academy. They are told “it is being taken care of” but later we learn the teacher had to lie for some reason they don’t go into and don’t want to talk about now.

There is a lot of stuff to go over in this one and you can go back and see things in each class that you don’t notice the first time through so I will leave that as an exercise to the reader. There is a summary of each class at the end of the issue.

While we don’t get introduced to anyone new, we still know the stakes as the students know that the magic classes are dangerous as using magic is fraught with difficulty in the real world and the teachers try to make it as realistic as possible.

You do find a bit about some of the students in each class and how they are getting on with their roommates. This will no doubt develop in future issues.

I would recommend this if you enjoyed the first issue and while there was not as much action as the first one, it is good to learn more about the academy.