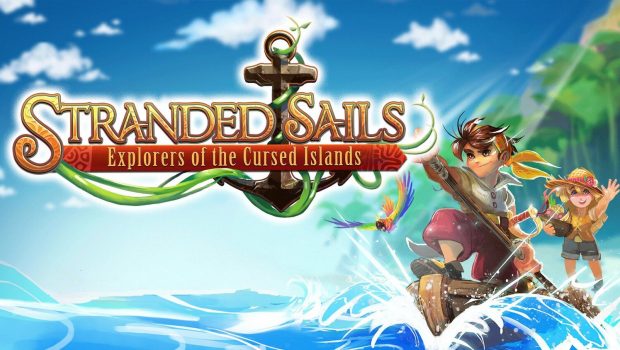 Summary: Stranded Sails will be too simple for most players, yet kindly welcoming for those new to the survival/crafting genre

If you’re reading this review on Impulse Gamer, a gaming enthusiast website, there’s a good chance that Stranded Sails: Explorer’s of the Cursed Islands will not appeal to you. That’s not to say that Stranded Sails is a bad game –  quite the opposite, in fact. Stranded Sails isn’t likely to appeal to the Impulse Gamer audience simply because it has been so heavily streamlined that the only people likely to find the game appealing are those that have no prior experience with survival games, or found other survival games to be overwhelming. But for those people, Stranded Sails will be an easy entry point into the genre. 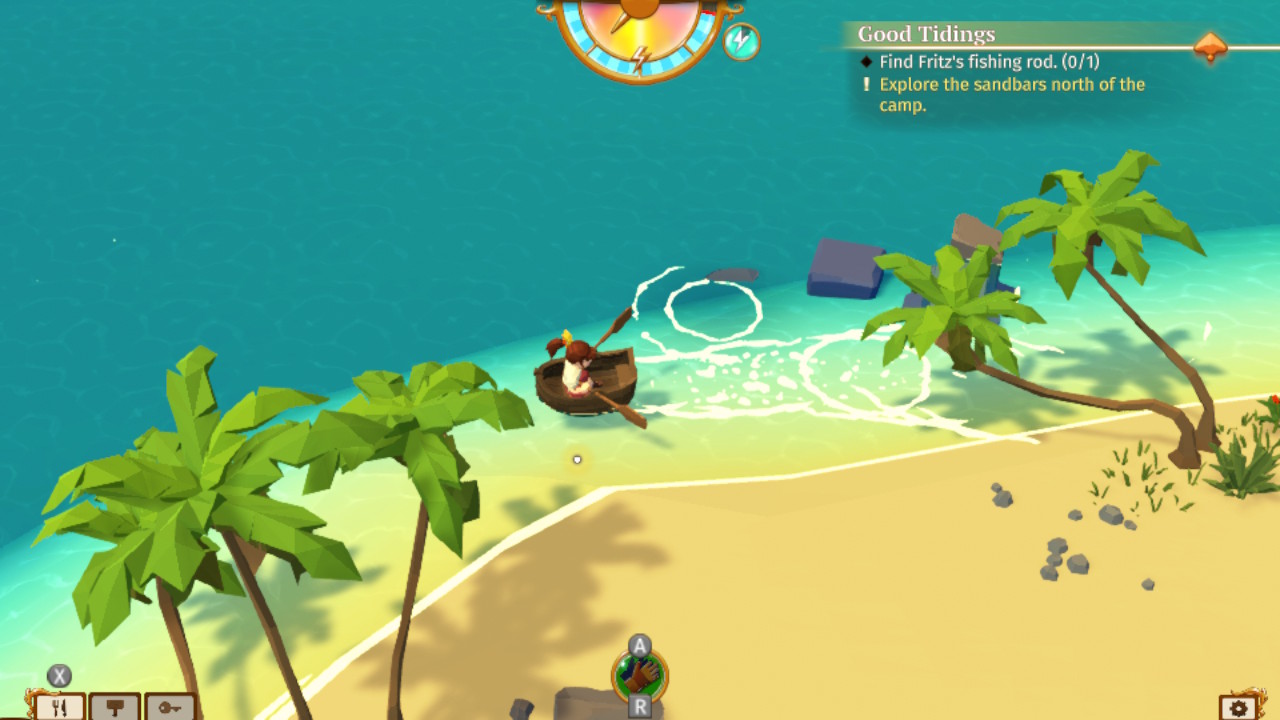 Stranded Sails is a survival/crafting game where you play as the daughter (or son) of a captain whose ship was destroyed mid-journey during a storm, marooning yourself and the crew on a tropical archipelago. With your father gravely wounded in the crash, it is up to you to search the surrounding islands for the missing crewmembers and to gather resources to build a makeshift colony. The narrative is razor thin, as are the characters, yet it’s implementation works to provide a continuous stream of logical quest objectives for the player to focus on. 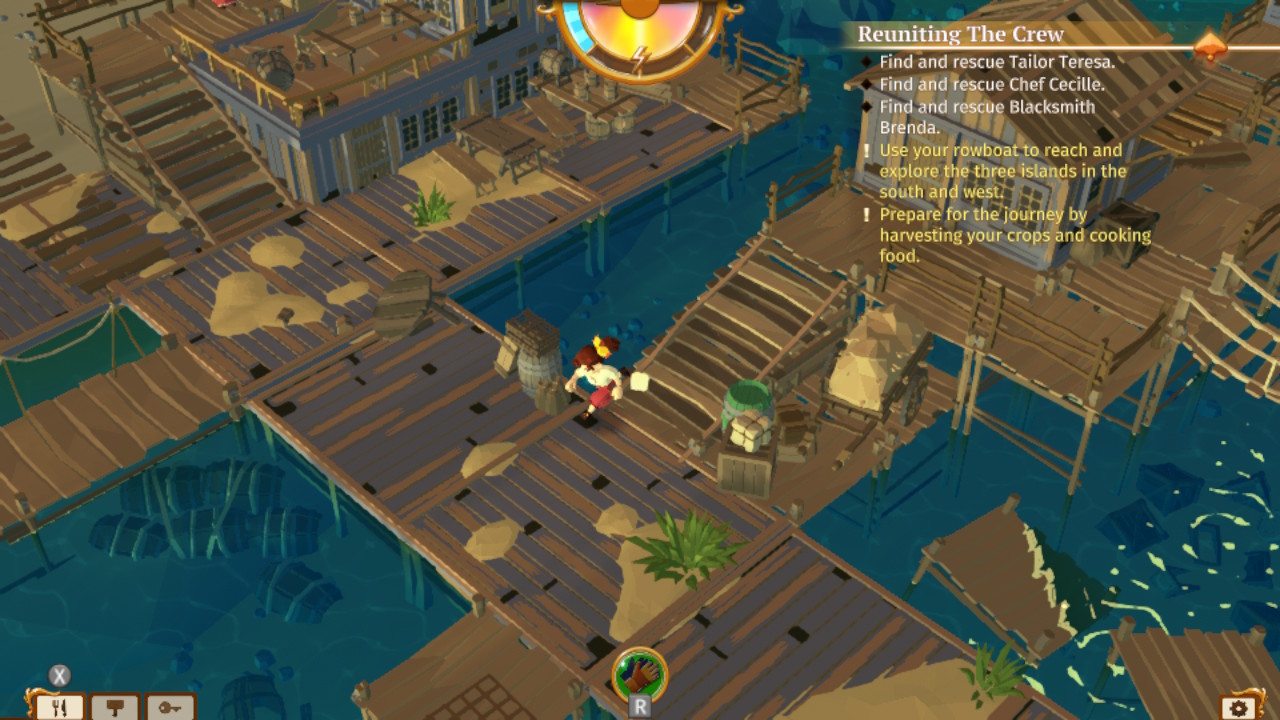 The actual interactive gameplay in Stranded Sails is very similar to other crafting/survival games. You have an inventory and a number of tools that can be used to perform actions at the cost of energy. Energy is indicated as a bar that surrounds the sundial at the top of the screen. This energy bar depletes at various rates depending on the actions being performed; chopping wood or digging will decrease it faster than simply walking or fishing. There’s no consequence to running out of energy, you’ll simply pass out and wake up back in your bed after some time has passed. 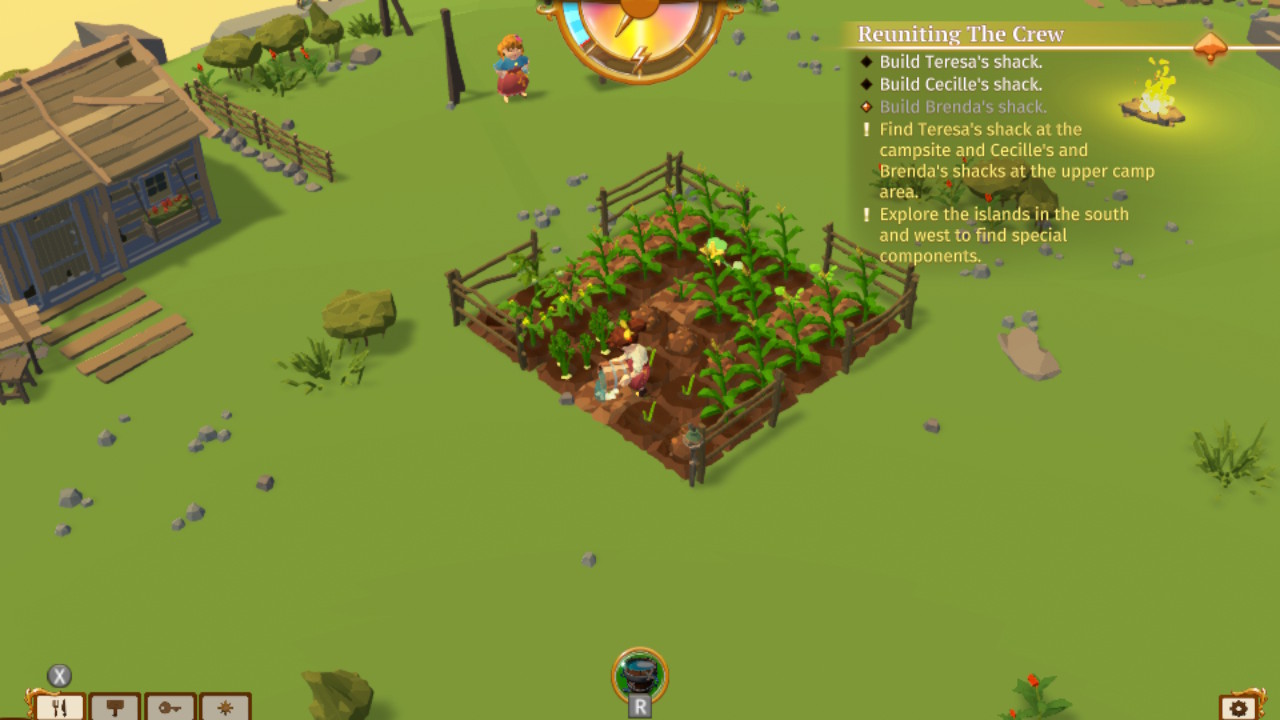 With that being said, the energy meter in Stranded Sails drops far too quickly to be anything other than burdensome. The game encourages you to prepare meals to eat while you’re in the middle of questing to restore some energy, but you can only hold a limited number of meals and the available recipes at the start of the game replenish very little energy. This is an intentional design decision made to limit the player’s exploration range at the beginning of the game (you can unlock additional meal slots and buffs to increase energy as you progress through the story), but it simply makes the gameplay feel tedious as the player is forced to constantly sleep after every activity in order to restore energy. 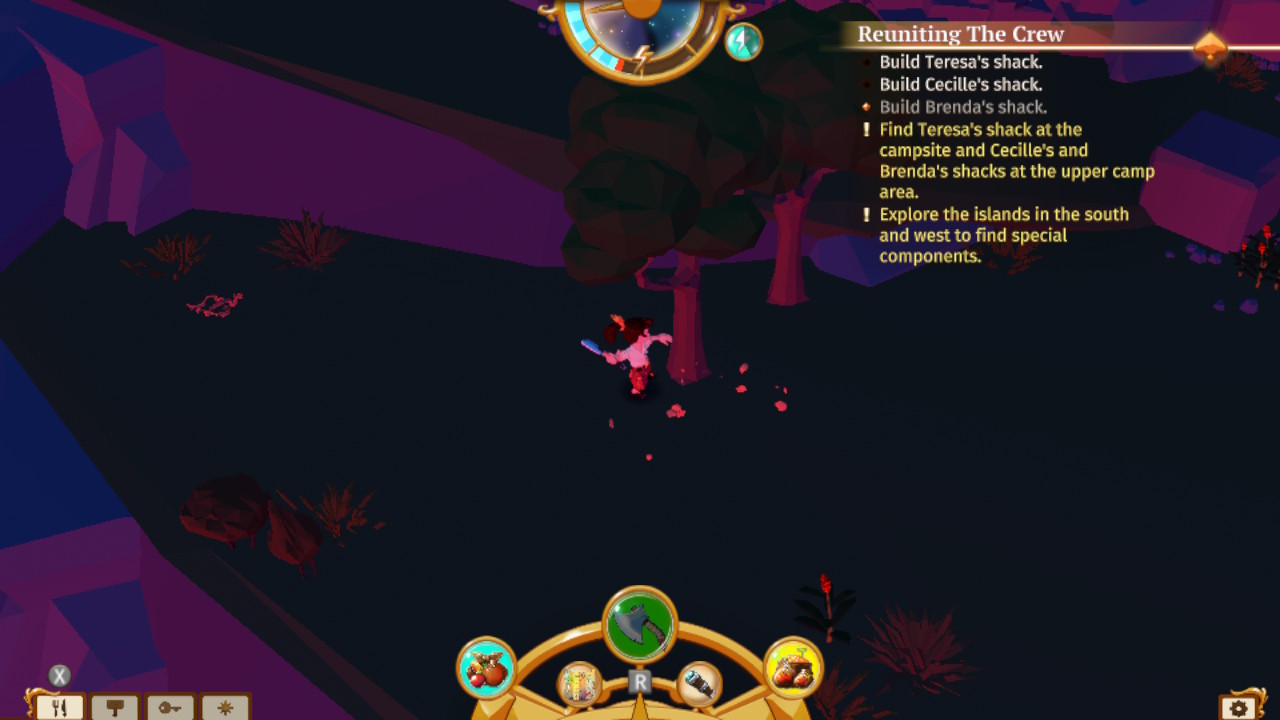 Survival/crafting games are a dime a dozen these days and there’s nothing new about a survival game with a story, yet what makes Stranded Sails unique is how rigidly the game forces you to focus on the quest objectives. This is because there’s really not much else to do apart from the immediate task at hand. When you first start out on the island you’ll be taught how to grow crops, chop trees and catch fish – these are the only tasks that you’ll have any prerogative over. It’s up to you to maintain your designated farmland to harvest crops that can be used to cook meals to replenish your energy. You could explore the islands if you wanted to, but apart from a few scattered collectibles that detail the game’s deep lore, there’s nothing interesting to find while exploring. 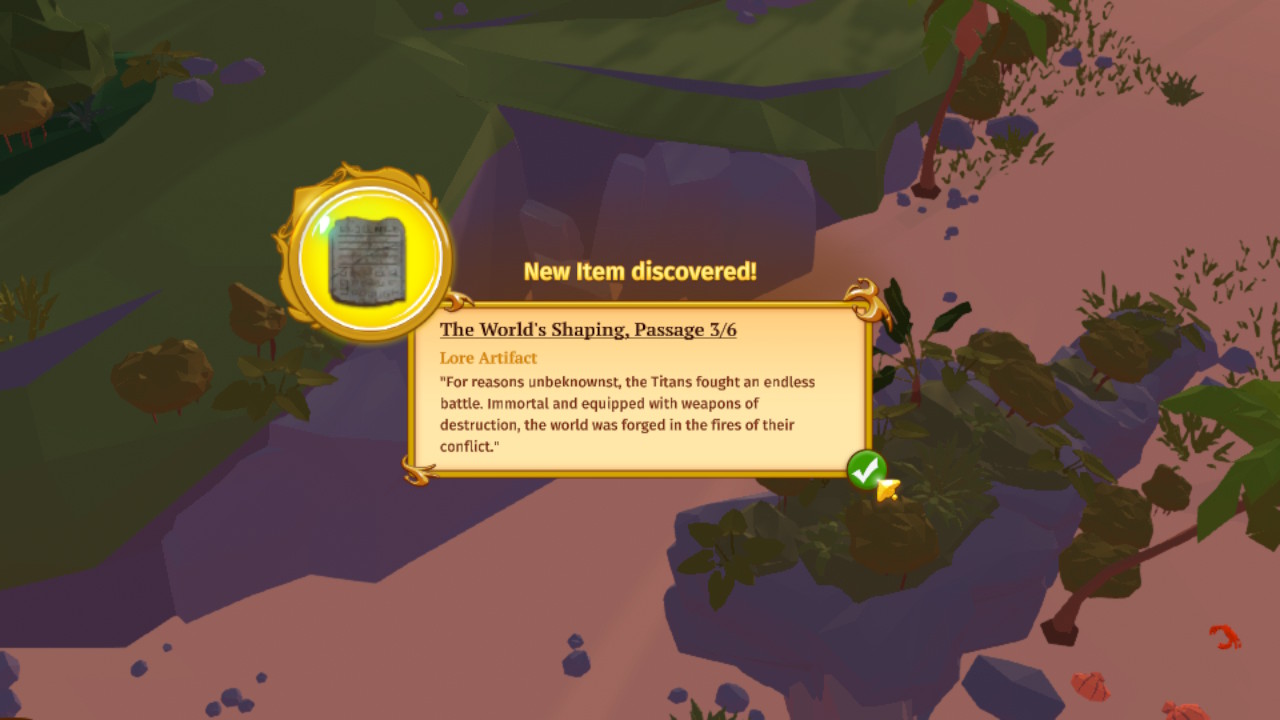 This brings me back to my initial point about the audience appeal of Stranded Sails. For players that are familiar with setting their own goals and exploring the world at their own pace in games like Minecraft, Ark or Rust, the strict progression path of Stranded Sails will feel too restrictive and uninteresting. Yet for those players that found games like Stardew Valley or Don’t Starve to be too overwhelming or aimless, having a constant goal to work towards and always knowing what to do or where to go next will be hugely beneficial. 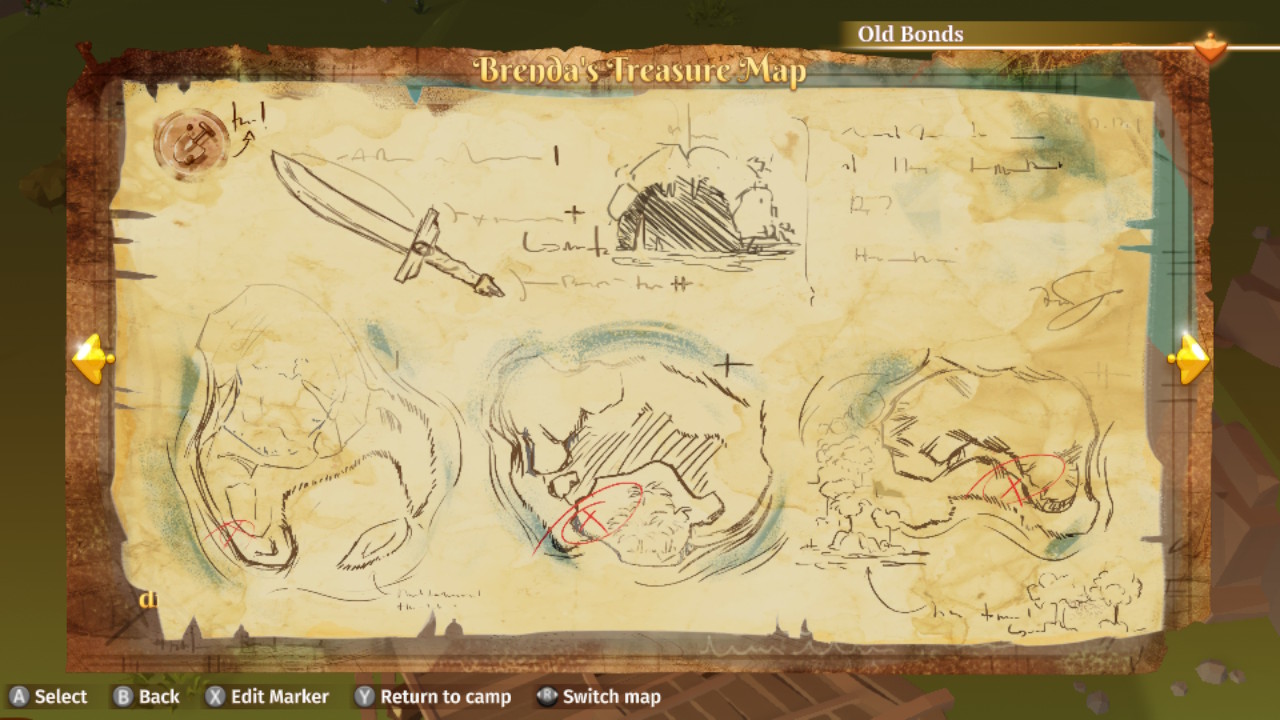 Along those same lines, Stranded Sails also streamlines many of the aspects of those aforementioned survival/crafting games that often make the genre feel confusing or overwhelming for many players. The most obvious of these is the immediate access to an in game encyclopedia that details everything from in-game activities, down to how to effectively manage your energy consumption. This encyclopaedia ensures that players are never stuck wondering how to complete a task. Combine this with the in-game map always showing the approximate location of the current quest objective; even the most inexperienced player will have no trouble progressing through the story. 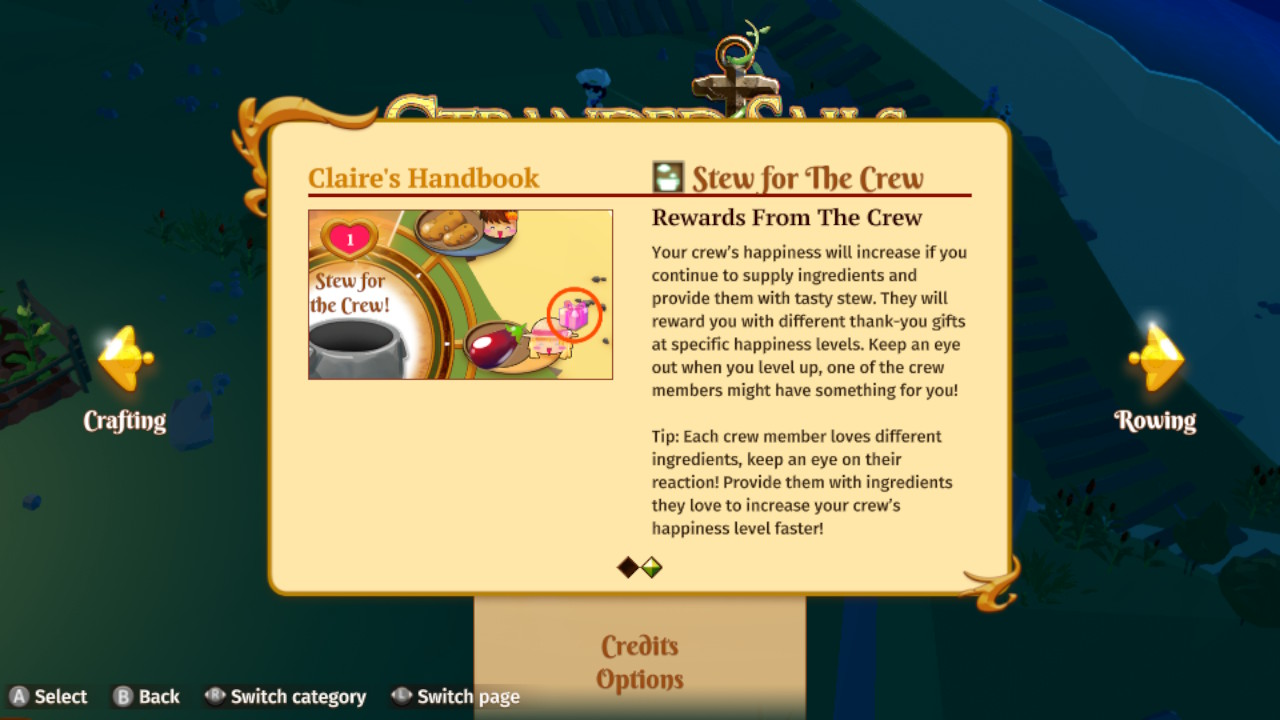 Stranded Sails also has one of the best controller interfaces for inventory management that I’ve seen in a survival/crafting game. Your inventory is split up into three sections: seeds, tools and food. Flicking the right stick to the left or right will quickly swap between these inventory sections, while flicking the stick up or down will cycle through the items within each section. Granted, this system only works due to the relatively small number of items in the game, but it’s a great system that eliminates the hassle of constantly opening and closing the inventory. 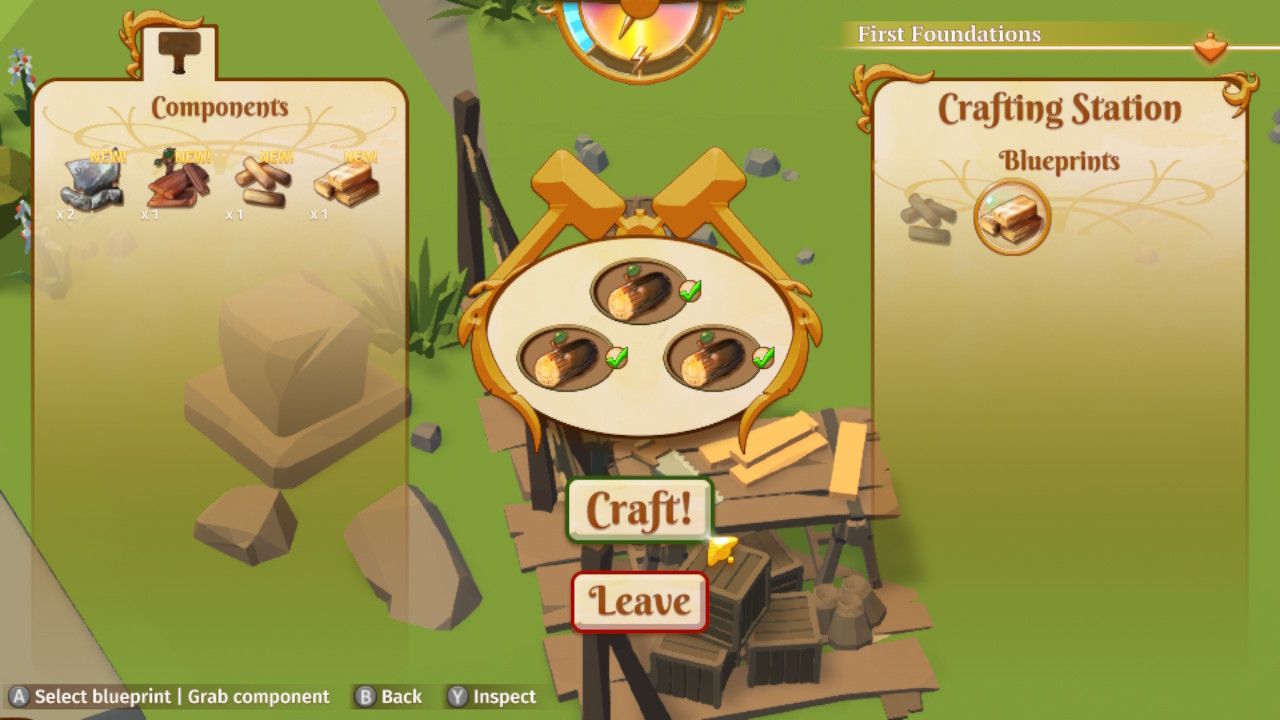 Another impressive aspect of Stranded Sails is it’s visual aesthetic and music. The game uses a low-fi polygonal visual style with plenty of bright colours and bulging, blocky shapes. The look is highly reminiscent of PlayStation 1 era polygonal graphics and the fixed-camera perspective gives the game a Final Fantasy 7 vibe. The visual style works well to make beaches and the ocean look beautiful, yet other areas of the like the open plains and caves look a little dull. On the other hand, the music is highly enjoyable, if a little lacking in variety. The soundtrack doesn’t change up very much, but the tracks you’ll hear the most are catchy and fun. 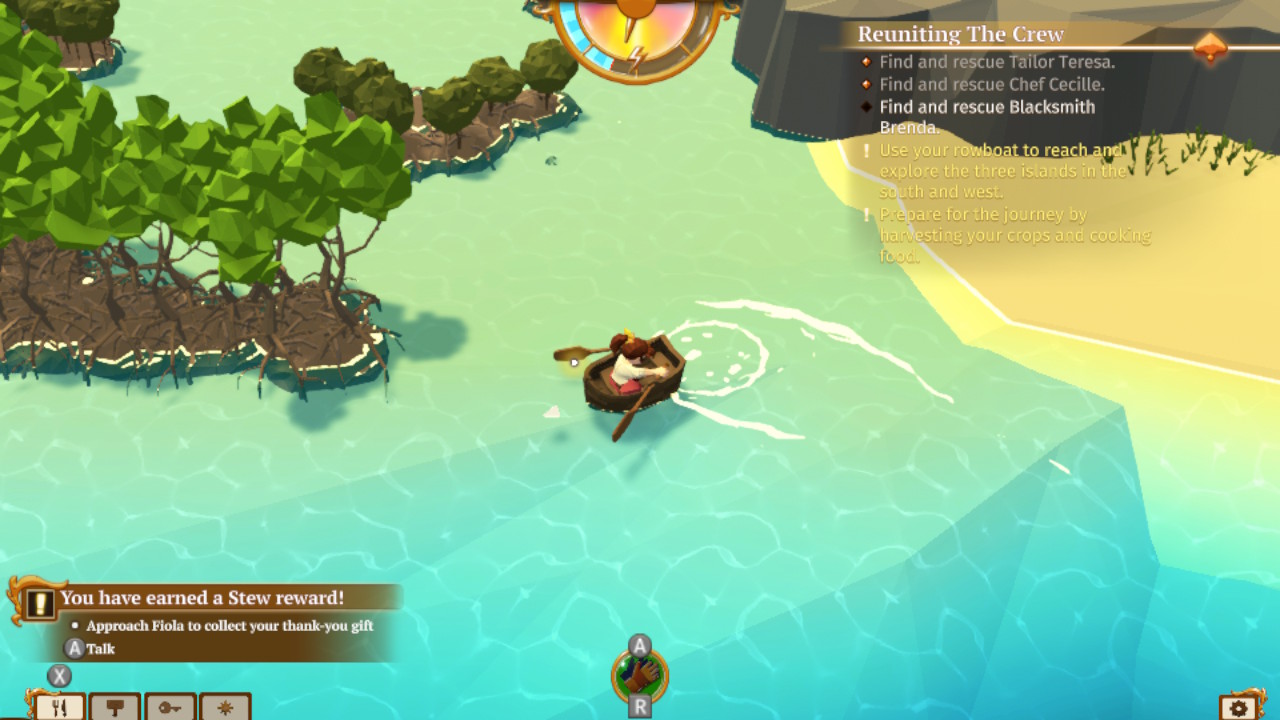 I’ve tried my hardest to avoid saying that Stranded Sails: Explorer’s of the Cursed Islands is a survival game for kids, but I think it’s probably true. The lack of motivation to stray from the immediate quest objective and the narrow scope of the gameplay is likely to be too simple for anyone reading this review. Yet the colourful, fun graphics, simplified control scheme and guided progression structure seems perfect for players that aren’t quite ready for the quests in Minecraft or the vast, open world of Stardew Valley. Pick this one up for someone that is just getting into games or someone that finds other survival/crafting games to be too overwhelming. 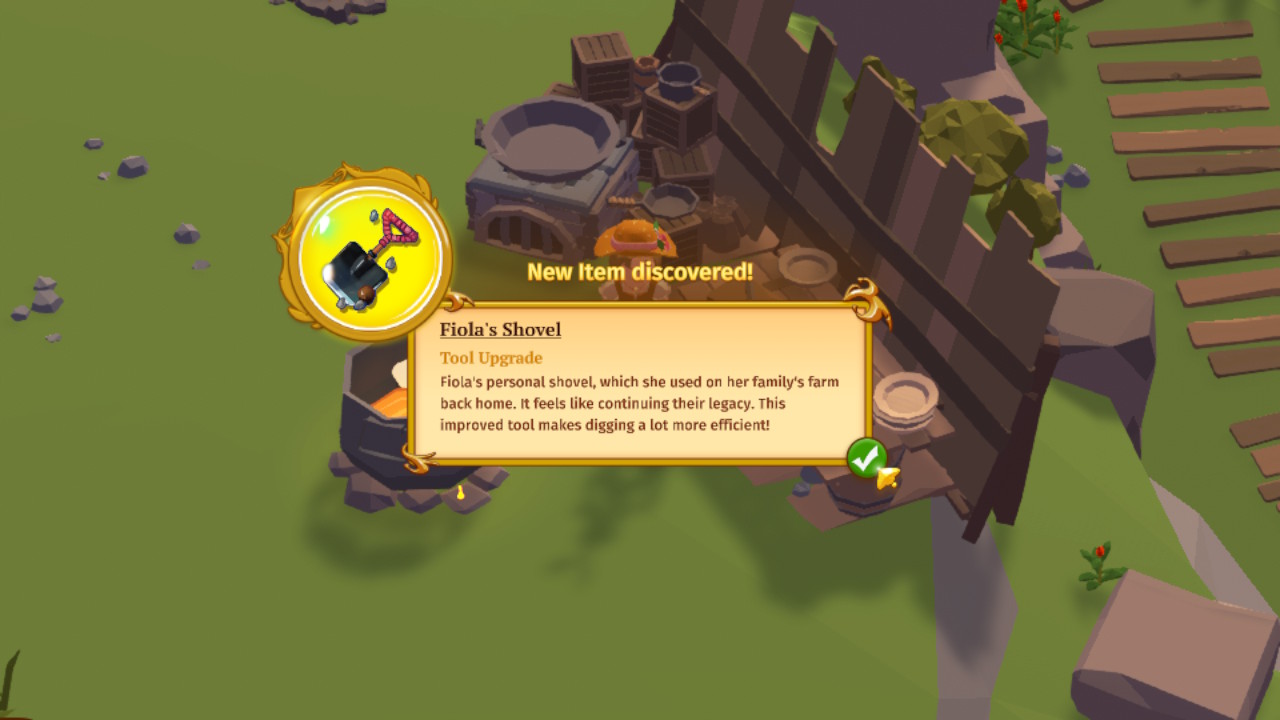 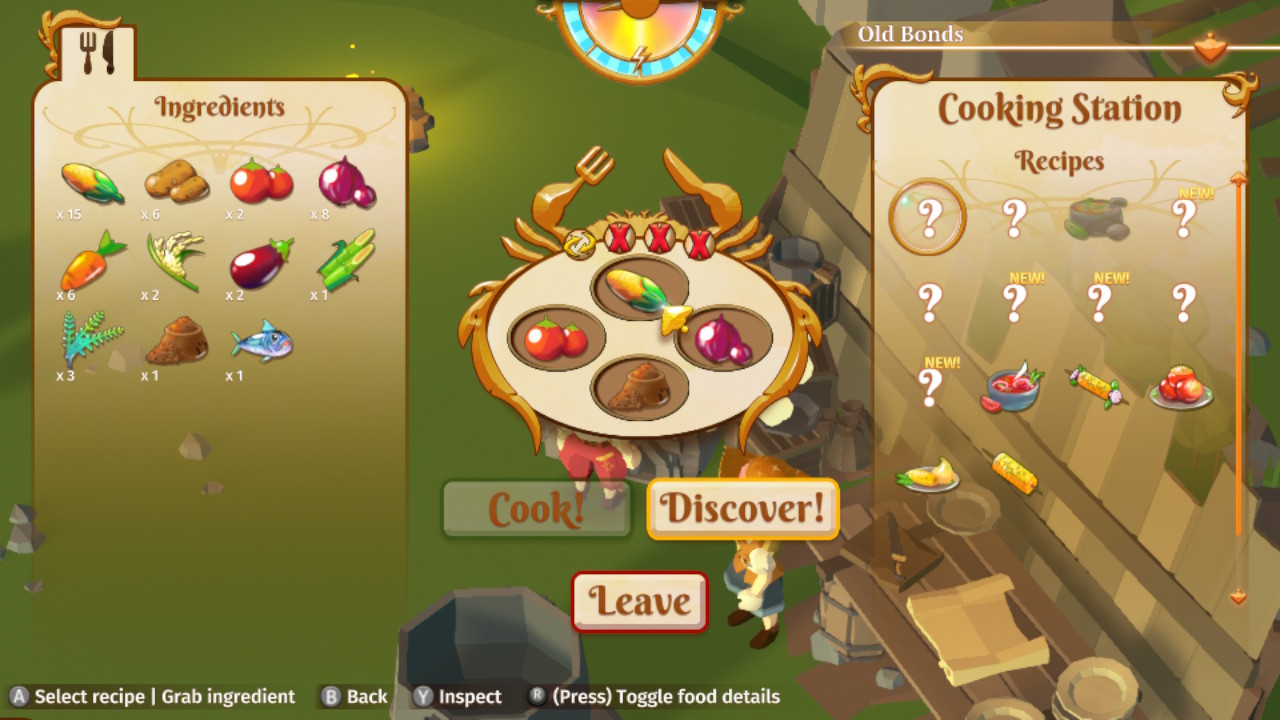