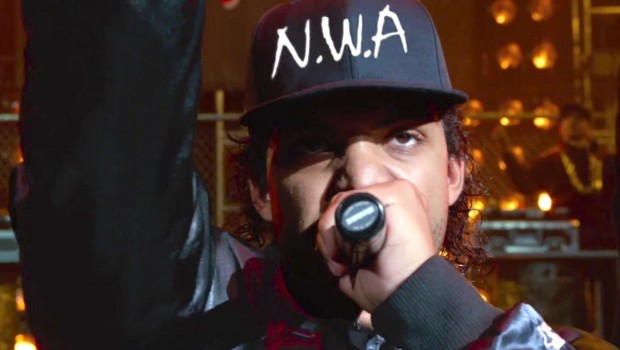 I used to listen to rap music when I was younger, specifically Eminem. Modern rap music carries the novelty of the artist vocalising the most outrageous angry thoughts, mostly of young men, and funneling them through an aggressive attitude that is simultaneously tough and funny. Today, I still enjoy some of this music, such as Public Enemies’ song Fight the Power from the Spike Lee film Do the Right Thing. Eminem’s biopic 8 Mile also impressed because it never felt like a vanity project and identified rap music as a dialect between impoverished black and whites in Detroit. But while watching Straight Outta Compton, a biopic about rap group N.W.A, you’re reminded of how some novelties, like the aggressive nature of rap music, are little more than a gimmick, the impressiveness of which dwindles with time. While undoubtedly channeling the group’s music, the relentless aggression of this film wore me down—from the constant swearing in the dialogue and the verbal and physical confrontations—particularly at the merciless duration of two and a half hours. It’s a pity the film’s machismo and aggro dominates proceedings because occasionally, but not often enough, some involving elements, counter the film’s relentlessness.

The film constructs an interesting historical mirror by characterising the rappers as victims of police brutality. The members including Eazy-E (Jason Mitchell), Dr. Dre (Corey Hawkins), soon to be actor Ice Cube (O’Shea Jackson Jr., Ice Cube’s own son), Dj Yella (Neil Brown Jr.) and MC Ren (Aldis Hodge), were according to the film regularly interrogated and bullied by the police in Compton, California during the mid-1980s. The scenes at night time are infused with a sense of danger, particularly as the camera of director F. Gary Gray pursues the back of the actors with a tracking shot, like in an exciting open scene where a house is raided. Similarly, the interrogation scenes at night eerily mirror the contemporary events of Ferguson as the police bully and subdue the rappers, which further adds to their story’s acute timing. There is also a fine scene where the film displays the bond between the group and their manager Jerry Heller (played by Paul Giamatti). It’s the persuasiveness he instills into the character as he reminds the rappers of the opportunities he can create for them, which brings authority to his character. In the scene where he defends the rappers against the police as they force them to lie on the floor, it shows that, at least initially, they are people he cares about rather than business or cultural pawns. But these insights fall second to a structure that is annoyingly typical of biopics like Jersey Boys, where events are ploddingly skimmed over in succession, rather than unearthing the depth and personalities of the main characters. 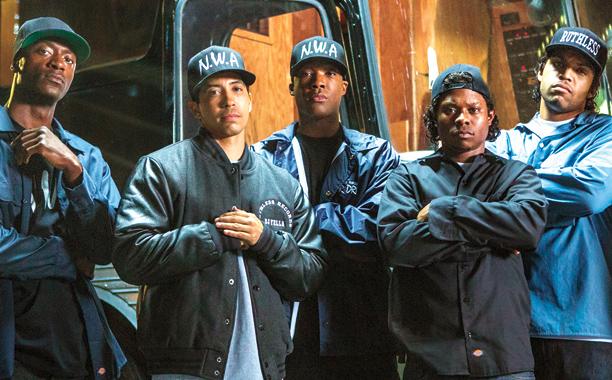 The film portrays the rappers as an emblem of free speech rather than as people worth exploring and the central rappers lack meaningful distinction from each other. Initially, it is insightful about how NWA came to create their most significant song “Fuck Tha Police” because it makes you understand what they went through to develop the attitude present in the song. The film though is curiously hypocritical, championing individualism and free speech in the face of police brutality, while also glossing over how violent its heroes are at the same time. In one scene, Ice-Cube uses a baseball bat to smash up the office of someone who owes him money. Similarly, in a hotel scene there’s no criticism of NWA drawing assault weapons on their enemies and dumping a girl out on the doorstep. This scene typifies the film’s weak view of females, who are cast aside and have little impact on the story. In an early scene, the mother of Dr. Dre says she’s worked too hard to have him spinning as a DJ, which is a cliché biopic trope where the parental figure doubts the talents of the subject. Meanwhile, further criticism has been launched at the failure to include Dre’s history of domestic violence again women. These qualms would have done little to dispel the enthusiasm of fans at the screening who were dressed in their N.W.A gear. The film caters to them to a fault by lumping events on top of each other and sustaining the aggro to the very end. I’d rather see a more disciplined version of the story because although there are good aspects here it’s an untidy synopsis of the group’s history.

Summary: It's a pity the film's machismo and aggro dominates proceedings because occasionally, but not often enough, some involving elements counter the film's relentlessness.