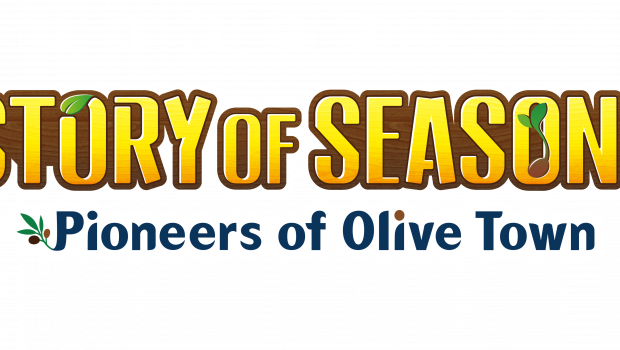 Summary: Pioneers of Olive Town offers familiar beats but none of the conviction of its contemporaries

A Year in the Life

Pioneers of Olive Town is all about little wins, steady progress and routine. For the most part, it’s a drama-free experience, except when the mayor frets over his plans to gentrify the town, but even for a casual farming sim, it feels a little too laid back. Once you’ve experienced all its secrets, watched the occasional cutscene, made your way through the first couple of years and fallen madly in love with a local, it’s hard to recommend settling down in Olive Town over Story of Seasons better, less buggy contemporaries.

Story of Seasons has a long and complicated history. Technically, it’s a Harvest Moon game under a new guise, as Harvest Moon games are still released under the original moniker. It’s a victim of gaming politics, a confusing ownership rights war that’s led to two different takes on a similar idea. Harvest Moon has, more or less, gone its own way, offering a building focused farming sim, whereas Story of Seasons is still a tried and tested casual crop grower, more in line with the series’ roots. 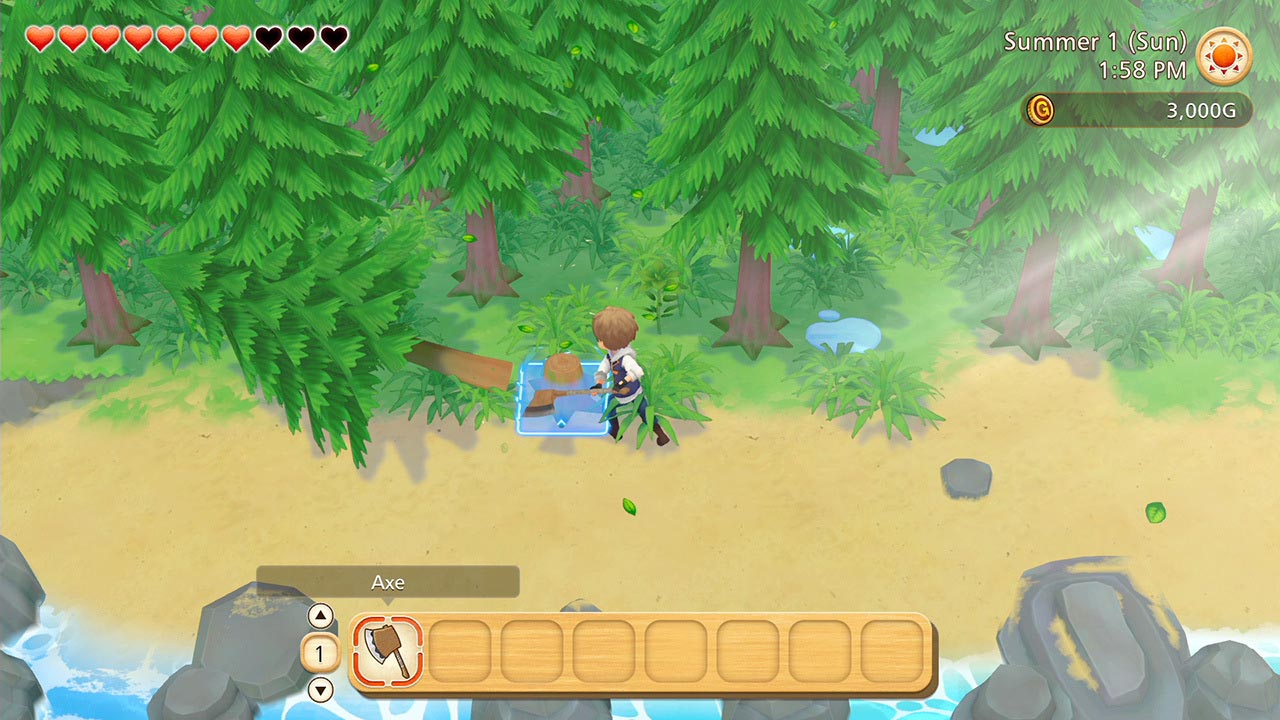 After inheriting your grandfather’s farm, you decide to leave the big city and live the quiet life in Olive Town. It’s a familiar formula; clean up your land, gather resources, raise farm anim als, interact with the locals and maybe even kindle a romance. For the first few seasons, you’ll be finding your feet and working out a routine that works for you, and if you’ve played similar games, you’ll know it’s all about these routines. You’ll obsess over cleaning up rocks that have sprouted up overnight, deforest entire areas to make sure they’re clear for your cows to pasture – it’s these little nuances you’ll find yourself meticulously doing each day. While the starting area for your farm is small, there’s plenty of expanding to be had the further you get into the game. It’s also easy enough to relocate any dilapidated buildings you might repair as you explore your homestead, giving you ample opportunity to shape your farm the way you like it.

I’m no stranger to a farm sim, so it’s difficult to play Olive Town without comparing it to the likes of Stardew Valley, My Time at Portia and, to a lesser extent, Animal Crossing. Bag and tool management works in a similar fashion to its kin, but Story of Seasons importantly doesn’t waste slots on tools. Things like your axe or, new to Olive Town, the bucket, which can be used to clear rain puddles to make mortar, can be slotted away when not in use in separate baggage slots, freeing up vital space for any resources you’ve come upon during your adventure. It also means you can never forget an important tool when out spelunking in the mines or fishing for squid, as they’re always right where you need them 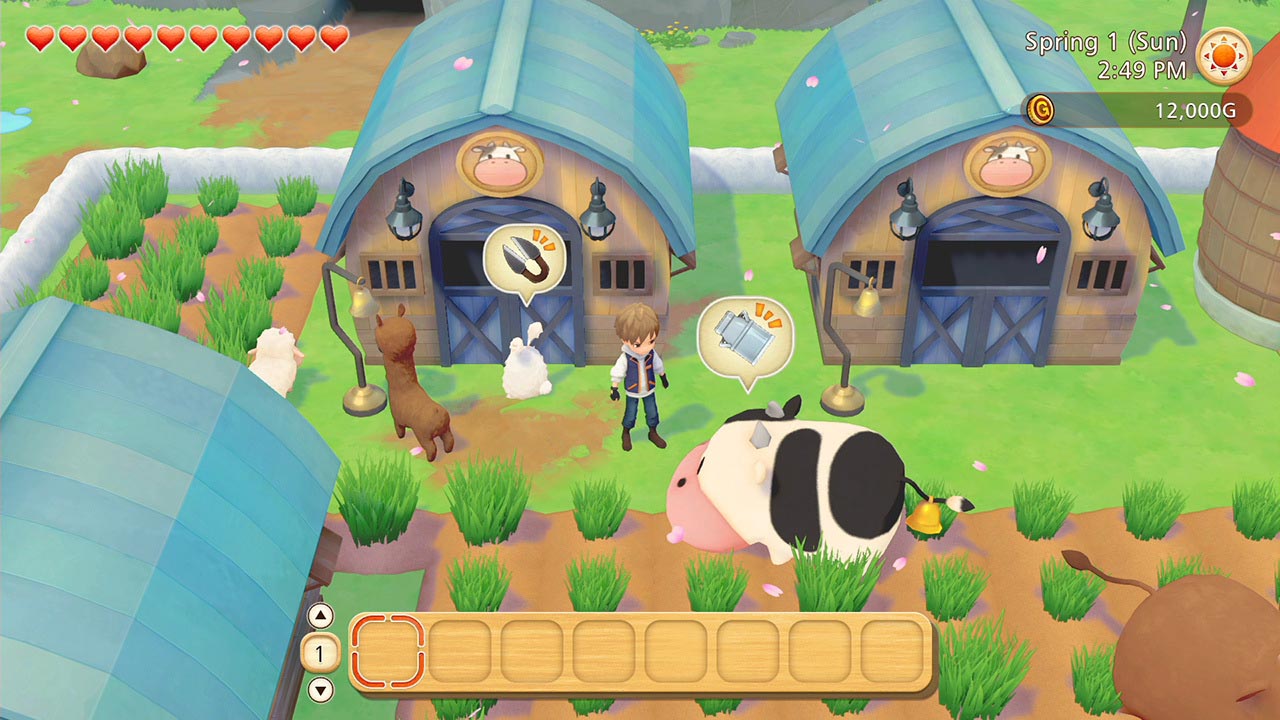 Once you’ve cleaned up your farm, it’s only natural to want to get started with planting a whole host of fruits and veggies. Once again it’s a time-tested process of tilling your land, sowing and watering seeds and waiting for the magic to happen. There’s ample variety of seed options, with a surprising amount of variation to both growable items, as well as those growing wild. By Summer of my first year, on top of my fields of eggplants, fruit trees and tea leaves, I had an adorable rotting log that grew different mushroom types depending on the spores I attached to it, as well as a cute little beehive providing me with tasty, profitable honey. It’s this assortment of goodies that Pioneers excels in. Even livestock and pets have a plethora of options. It’s a genuine pleasure to be able to choose between different dog and cat breeds; after all, who doesn’t want a Bernese Mountain dog running around their farm?

Pioneers maintains that classic Harvest Moon character design, with caricature-like giant cows, bulbous chickens and fluffy Alpacas, but I enjoy looking at my animals more than I do interacting with them. They don’t have any requirements, outside of being fed and groomed, and you can’t make adjustments to their barns, neither cosmetic or practical, so as long as their basic needs are met, they’ll keep popping out milk, eggs and other products ad infinitum. In the end, I stopped bothering to grow food for them and just left them outside to fend for themselves, making me either the cruelest inhabitant in Olive Town, or the saviest, depending on your moral compass.

Mining and fishing are both integral parts of any farming sim, and in a similar fashion to other titles, both make up a good chunk of your time in Story of Seasons. I’m an absolute sucker for a fishing mini game, and Story of Seasons is one of my favourites, especially because you can craft different types of bait to attract new species. There’s a genuine thrill to reeling in a new sea creature, which can then be donated to the Islands museum, in true Animal Crossing fashion. If you’ve ever fancied yourself on the cover of National Geographic, the museum also accepts photos of wildlife, as well as special donations found on your adventures, so completionists can have a literal field day. 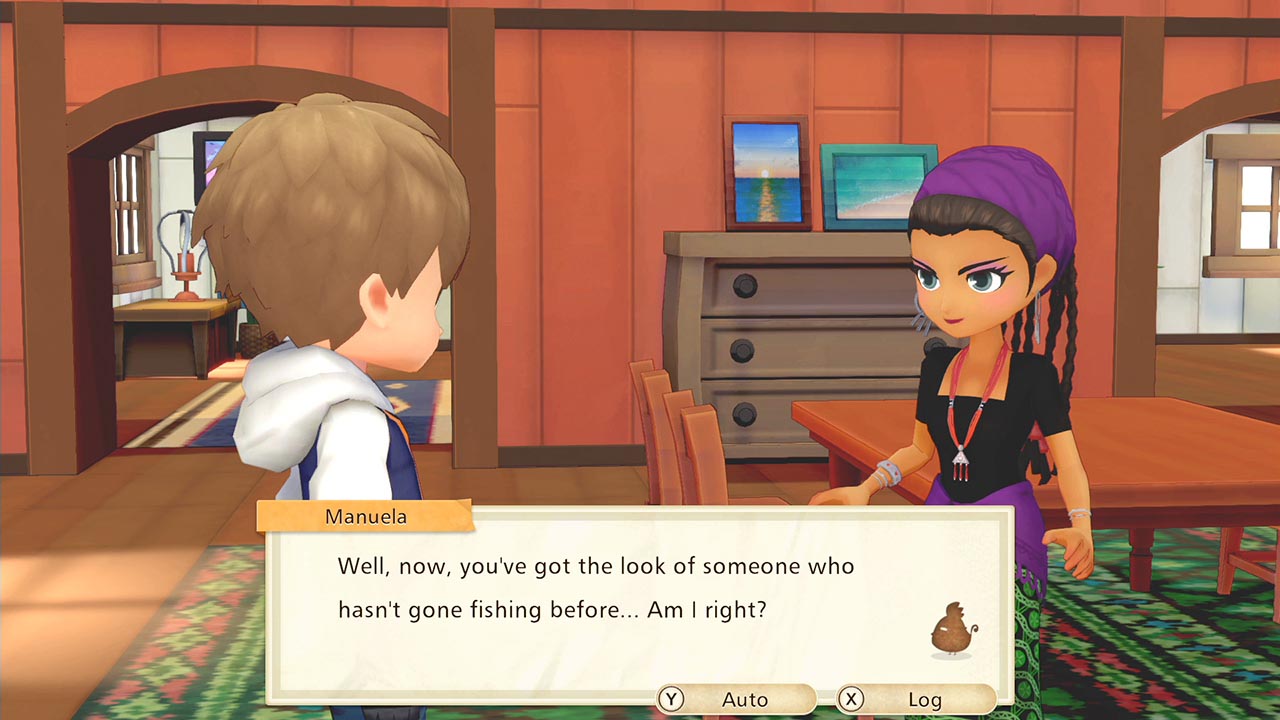 Mining however, isn’t very engaging, and while going through procedurally generated caverns and playing Whack-A-Mole with pop-up enemies before your energy runs out is a necessity, there’s almost no variation to make it worth doing, unless you need the rare resources the mines hold. Fully losing energy doesn’t cost you any items, and you’ll wake up refreshed in your house the next morning, which reduces the stress of a late night spelunk. That being said, energy does seem to drain quicker than in similar titles, especially for the first few seasons, and it’s frustrating to be out of juice after doing daily chores.

A key part of any sim game is crafting, and while it’s perfectly serviceable here in Olive Town, things become more frustrating when using Makers. Makers are used to process raw ingredients into different goods, for example, turning Wood into timber. Processing takes, on average, a couple of in-game hours (to put it into context, a full day lasts about 25 real-life minutes), which is fine, but you can’t queue processing. It’s something that simply doesn’t make sense, to make any real progress in the game, you have to devote entire areas of your farm to Makers. It’s made worse by each Maker requiring an obscenely large area either side of them before you can place them down. By my third year, I had that many Maker types, I had to devote entire areas of my farm to my veritable army of processing units. 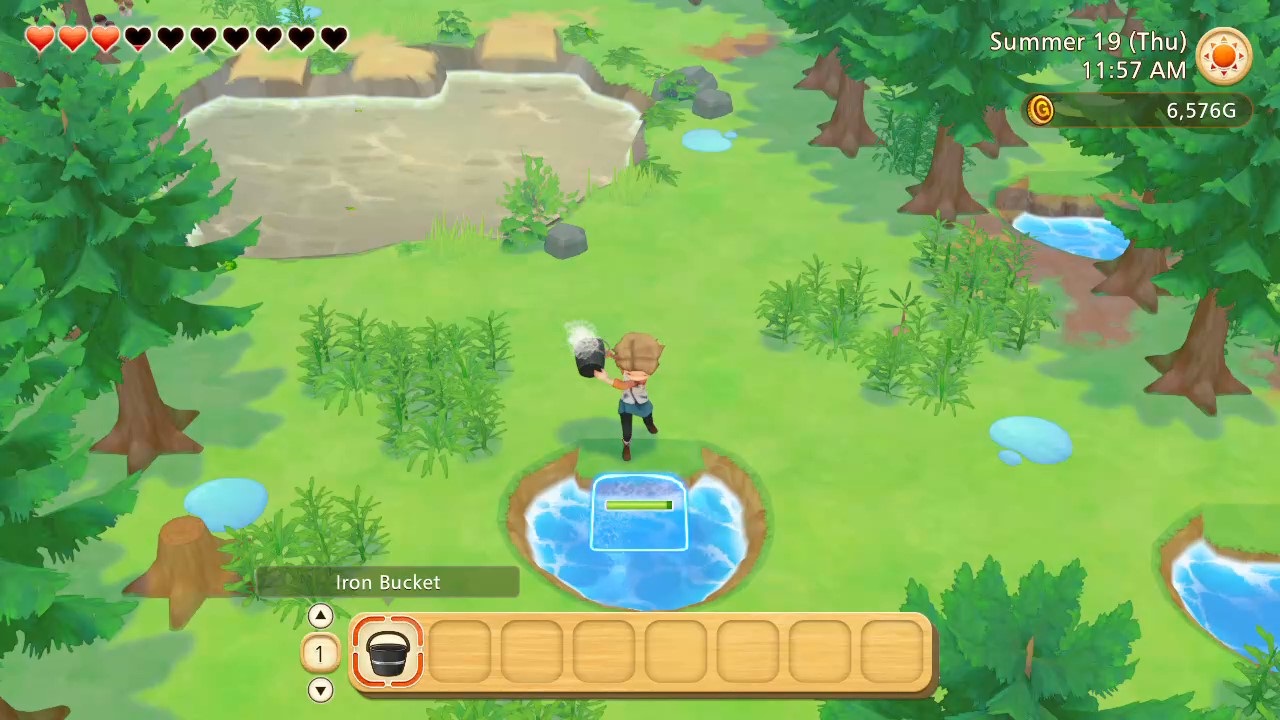 If you’re looking at visiting Olive Town for the locals and not just the farming, there’s plenty of shops to visit and characters to meet. There’s several restaurants, a clothing store, a grocers and other amenities for you to spend your hard earned cash in. It’s also where you’ll meet your future beau or belle, with several romance options available. It also makes strides to be progressive, with ‘best friend ceremonies’ allowing same same-sex relationships. This is all assuming that you can get a decent conversion out of anyone. I spent two years wooing Reinna, the museum working brunette. Honestly though, I was shocked she was interested, especially as she almost exclusively talked to me about dirty ponds. It’s weird to think that eventually, this character might become my in-game wife, even though we’ve barely had a conversation that isn’t a gaming tip disguised as narrative.

It’s a problem that stretches across the entire town, and one that’s even worse when a festival is on, where townsfolk turn into mindless, event-obsessed weirdos. For example, leading up to the Pet Derby it was the only thing on townsfolks lips, but it was all they talked about the week after, too. “It’s great you won the Pet Derby!” I know Manuela, you’ve told me for the last three days. It’s especially annoying as festivals aren’t all that interesting, for example, the aforementioned Pet Derby consists solely of running your poor dog back and forwards until one is crowned champion. In the Summer Jamboree, you smash barrels into water, and once the winner is crowned, the festival ends. It makes you wonder why everyone is so obsessed with them?

It’s what separates Story of Seasons from titles such as Animal Crossing. Unlike the latter, it’s difficult to form any connection with anyone, as they all feel scripted. There’s a bulletin board, where you can complete missions for different characters, but because you deliver the items to the board rather than a needy villager, it doesn’t feel personal like it does in say, Stardew Valley, where Linus thanks you for dropping off his much needed largemouth bass. There’s never really much need to go visit townsfolk because they’re never that bothered about being visited by you.

This is assuming you can be bothered to wait for the game to load between your farm and the town; there’s an insane amount of loading screens. Dropping something off at the museum? Loading screen. Getting it appraised first? Loading screen. Entering a building? Loading screen. To be fair, the developers are already working on shortening these, but as it stands, they slow the gameplay down to an almost unplayable level, especially when coupled with a lousy frame rate in both handheld and docked mode. 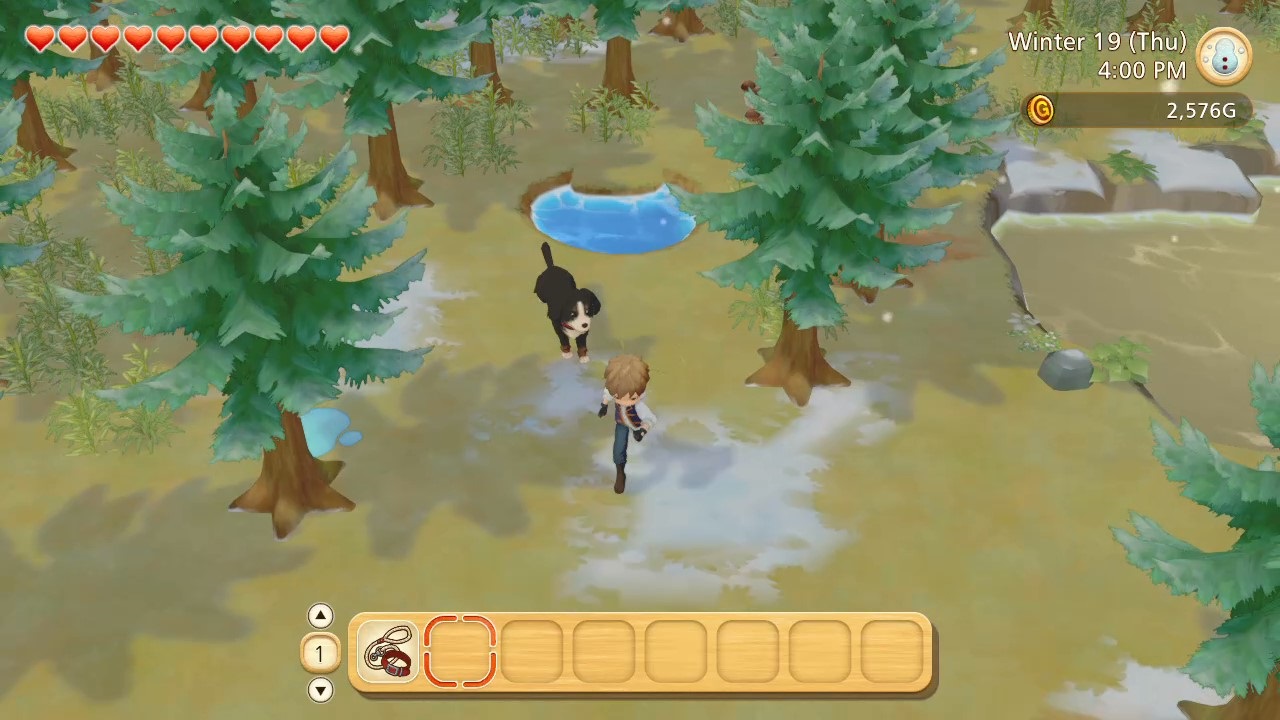 But it’s not just loading screens that hamper gameplay, there’s some serious bugs too. Some are just annoying, even amusing, like watching your beloved pet run aimlessly at a wall because he can work out a way around, but several times the game has frozen when I’ve tried to leave my house. Again, I’m sure these bugs will be ironed out, but it’s just not polished, and when you’re competing in an already oversaturated market, it makes it difficult recommending Pioneers of Olive Town over other, better, titles.

If Story of Seasons hasn’t exhausted you after your first few in-game years, there’s already a season pass planned for those hungry for more. On the whole, I’m usually okay with DLC, but it does feel kind of dirty to charge more for a game that’s already lacking in longevity and, well, polish. That being said, if it’s your thing then it promises new livestock, clothing and new areas for you to explore, as well as visiting characters from previous games.

If you’re a farm-sim aficionado, there’s more titles than ever in the genre, but that doesn’t work in favour for the latest Story of Seasons entry. Compared to its competition, it lacks personality and, most importantly, heart. That’s not to say it’s a lost cause, and with a little finnese and love, Story Of Seasons could easily return as the darling of agricultural simulators, but right now, it’s nowhere near the cream of the crop.