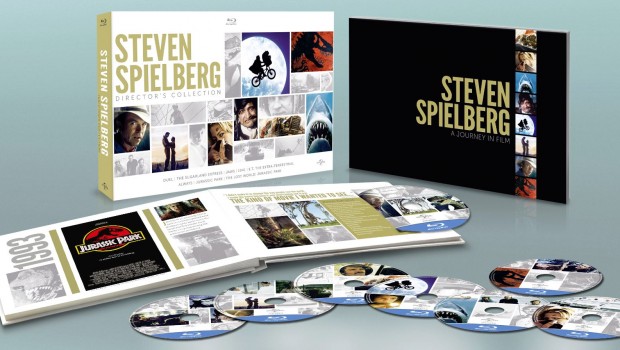 How Steven Spielberg turned cars (and planes and spaceships) into stars

With the release of the Steven Spielberg’s Directors Collection, eight films on Blu-ray will cover the first thirty years of his illustrious career and the first time he has authorised a box-set with his imprint. While films such as Jaws (1975), E.T. The Extra- Terrestrial (1982) and Jurassic Park (1993) boast terrific performances from the likes of Richard Dreyfuss, Robert Shaw, Drew Barrymore and Jeff Goldblum, Spielberg also manages to make the vehicles in these films into characters themselves. Here’s a rundown of the classic cars, boats and planes (plus one spacecraft) that became as important in Spielberg’s storytelling as any actor….

The vehicle: A malevolent petrol tanker, spewing exhaust and hogging the road, chases down mild mannered businessman David Mann (Dennis Weaver) in a deadly game of cat and mouse.

Special features: While the truck — the identity of the driver is never revealed — is hell-bent in running Mann off the road, in a pointed moment of black humour, it comes to the aid of a stranded school bus, much to Mann’s confusion.

Transport trivia: Spielberg held a casting session for the truck and chose the 1955

Peterbilt because it had the qualities of a human face; a lengthened front end (snout), black windows (eyes), tanks on the side doors (ears), a grill and bumper (a mouth).

The vehicle: The police car of Officer Maxwell Slide (Michael Sachs) is commandeered by pushy Lou Jean Poplin (Goldie Hawn) and her escaped con husband Clovis (William Atherton) to take them all the way to the town of Sugarland to pick up their baby Langston from an adoption home.

Special features: The dirty back windscreen. In one of the film’s touching vignettes, Lou Jean writes “Hi” on the glass to lead cop Captain Tanner (Ben Johnson) who acknowledges the gesture — cop and criminal bonding in a touching visual manner.

Transport trivia: After the shoot finished, Spielberg bought police car 2311 and drove it back to Los Angeles. He later donated it to a museum.

The vehicle: Quint’s fishing boat. The salty seaman’s vessel takes Chief of Police Brody (Roy Scheider) and shark expert Hooper (Richard Dreyfuss) on the hunt for a Great White. It is the site for adventure, sheer terror and a drunken sing-song of Show Me The Way To Go Home.

Special features: Yellow barrels that get sunk into the shark’s skin to stop the creature going under. In reality, they were a clever way to depict the Great White when the mechanical version wasn’t working.

Transport trivia: The original Orca lived on the Jaws (1975) attraction at the Universal Studios tour. Spielberg, whose office is based at Universal, would often use the cabin as a thinking place when the visitors weren’t around. One day, he turned up to find the boat chopped up into little pieces, much to his annoyance.

The vehicle: Sgt. Frank Tree (Dan Aykroyd)’s tank. Lulubelle plays an important role in quelling the riots brought on by Pearl Harbor paranoia then heads off to the Pacific coast-line to sink a Japanese submarine (so to speak).

Special features: Lulubelle’s paint job. At one point in the height of the action, the tank careers through a paint factory and gets a multi-coloured face lift. In a smart undersold gag, it then careers through a turpentine factory that strips all the colours off. Genius.

The vehicle: Elliott (Henry Thomas)’s BMX bike. It plays a crucial part, firstly whisking E.T. to a clearing so that he can phone home, then speeding him away from the cops to meet his spaceship.

Special features:  It can fly —with a lift of his finger, E.T. spirits Elliott and his BMX into the night sky. When they cross the moon in silhouette, it becomes one of cinema’s most memorable images. By the way BMX stands for Bicycle Motocross.

Transport trivia: The image of Elliott and E.T. flying on the BMX bike became the logo for Spielberg’s production company Amblin Entertainment. Olympic winning cyclist Chris Hoy was inspired to get on a bike by watching the BMX scenes in E.T. The Extra-Terrestrial (1982).

Special features: The plane’s ability to drop red fire retardant onto wildfires to quell the flames. For the scene in which a load is accidentally dropped on Al Yackey, Spielberg had actual fire-fighters fly over and bombard John Goodman for real.

The vehicle: A yellow and green jeep, running on rails, that takes the heroes on their journey through the park. Until it unfortunately comes to a halt outside the T-Rex paddock. Gulp!

The vehicle: The star of the Lost World’s most exciting set-piece — a madcap dinosaur safari — is a heavy duty specially-modified jeep driven by big game hunter Dieter Stark (Peter Stormare) on the tail of a Parasaurolophus.

Special feature: An extendable outrigger that sees the passenger seat extends outwards giving the hunter an unobstructed view of its prey.

Transport Trivia: The jeep is actually a Mercedes-Benz AAV.

The vehicle: David Mann’s solid red sedan, nothing flashy or exciting that is pushed to the limit by a monstrous truck. A non-descript car for a non-descript man.

Special features: It’s bright red colour, specifically chosen so it would stand out against the earth tones of the desert and the rusty browns of the truck.

Transport trivia: While there was only one truck, there were three copies of the car, much needed for all the battering it would take at the hands (or wheels) of the truck.

The vehicle: E.T’s spacecraft is the opposite of high tech, a reflective hot air balloon or a Christmas tree decoration with slight Gothic trimmings. In the opening scene, it leaves E.T. stranded alone on Earth.

Special features: As E.T. begins his journey home, his spaceship paints a magical rainbow across the sky — so more enchanting than the vapour trail described in the original screenplay.

Transport trivia: The 24” inch model is currently housed in Steven Spielberg’s production base at Universal studios.