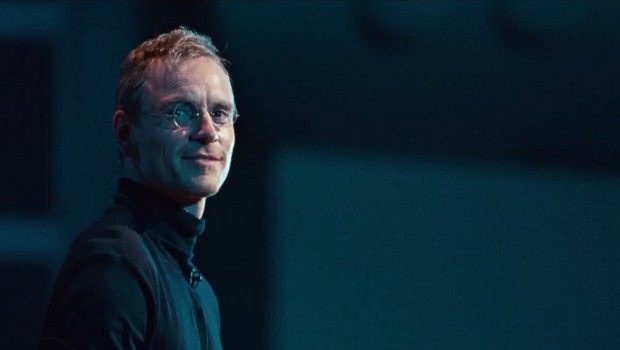 This is yet another biopic about the founder of Apple Steve Jobs but one with the prestige of being directed by Danny Boyle, written by Aaron Sorkin (The West Wing, The Social Network), and having Michael Fassbender starring in the title role. This follows on from several feature films and also a documentary about Jobs. But unlike many biopics this has a highly unique structure in that it is set around three different stages of Jobs’ life, specifically the backrooms of three convention centers where each time he prepares to unveil a different product and mingles with his staff and enemies. One of his main opponents is his ex-girlfriend Katherine (Chrisann Brennan), who believes that Jobs is the father of her daughter Lisa but he denies her parentage and refuses to pay child support. The only person who tolerates Jobs is his long-serving marketing manager Joanna (Kate Winslet) who has the courage to stand up to him. In the title role, Michael Fassbender doesn’t look like Jobs but his imposing physicality is essential to the film’s core: Jobs’ inflated ego in seeing himself as an artist who must retain total control. It’s an idea further permeated by the number of narrow corridors and hallways.

The film is also a question of whether he will be more humane to the people around him by listening to their ideas and advice and also improving his personal life. It is as though the other characters here, including his colleague Steve Wozniak (Seth Rogen) and mentor (Jeff Daniels), are tugging at his conscience to change. But even as his attitude does evolve over time in the film, it doesn’t make him more likable. Any changes to Jobs are mere variations of control and power. On the latter, he says at one point: “I don’t know why anyone would want to give it up.” One example is that throughout the film he insists on disowning and being remote from his young daughter but he becomes more possessive of his parental role as she grows up and others contribute to her life. The change in attitude is an extension of the film’s unique experiment with time. The three periods are compressed together, which cleverly accentuates the dramatic changes in his relationships, with close friends quickly dissolving into enemies of betrayal. Aaron Sorkin’s dialogue shines here, serving Michael Fassbender and Kate Winslet with a rich assortment of great one-liners, humour and wit. They thrive off the script with aggressive and highly energetic performances. The tradeoff is that the volume of content in Sorkin’s script bludgeons us with information, including shouting matches paired with quick flashback scenes. The ending also feels overly soft on Jobs, considering what an awful person he is throughout the film, making for a disappointing finish. Nonetheless, I’m interested to see the film again at some point because when you have time to absorb all the positives here, from the performances to the script’s details, it impresses and lingers.

Room is an emotionally devastating film about adaptation, specifically what feels comfortable to us and the difficulty of breaking away from these familiar zones we know are not necessarily good for our wellbeing. The dramatisation of this concept takes place in, as the title suggests, a single room. Jack (Jacob Tremblay) and his mother (Short Term 12’s Brie Larson) have been trapped in a garden shed that is locked by an electronic door with a pin code. She has been imprisoned for seven years and he’s been there since birth and is now celebrating his fifth birthday. The man who imprisoned them is Old Nick (Sean Bridgers), a powerful figure who comes in during the night to abuse Ma and is the only one who knows the code to the door. What spurs Ma to try to escape is that Jack still has a limited concept of the outside world because he’s never experienced it. His mother has to explain basic things to him like the concept of television and what is real and imaginary. Seeing that he still hasn’t fully grasped reality at age five makes her more inclined for them to escape. Adapted from the book by Emma Donoghue, the first half of this film is masterful in its suspense by director Lenny Abrahamson, who last made the indie comedy Frank.

The tension is so palpable because of how the film builds towards the escape plan, which is followed by an extraordinary sequence that appropriately alters its stylistic choices from using tight framing and reverting to wide shots to show the boundlessness of the outside world and close-ups of adult faces to express their alien presence to Jack. Once the film resolves the escape plan, it ventures into new territory. Problematically, it doesn’t reach the same heights of tension again. Is this asking too much? Perhaps it is because we are conditioned to expect large climaxes and for films to continually build instead of dipping in the dramatic stakes. But at least the film is thematically consistent, pursuing adaptation in how Ma and Jack react to the outside world, including her self-doubts about whether she is responsible for her son’s experiences and her relationship with her parents (played by William H. Macy and Joan Allen, respectively). Even as it dips and an important character weirdly disappears, images and small moments offer great poignancy, such as when Jack plays soccer for the first time and reassures his mother of their strength to each other (“You are my strong” is a deeply emotional line). The two lead performances are superbly realised. As we’ve come to expect, Brie Larson is an enormous emotional anchor and Tremblay is a remarkable find, a scene-stealer whose naturalism brings their scenes together with humour, sadness and fear. Though flawed because of the inevitable structural quirks, Room digs deep under your skin and into your mind because of its striking emotional impact.