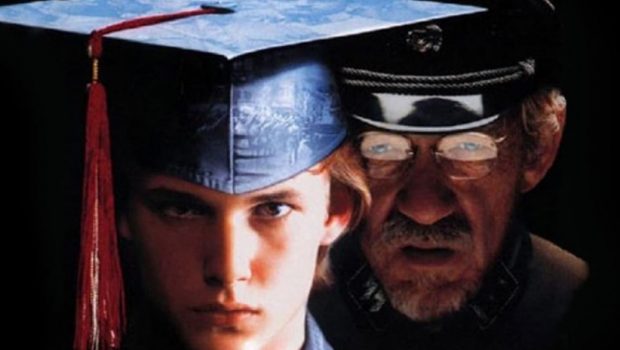 Summary: Ian McKellan and Brad Renfro bring their A-games in this terrifying thriller of an unmasked Nazi living in the heart of American suburbia.

Prior to the 1990s you could count quality adaptations of Stephen King’s works on one hand – Carrie, The Shining and The Dead Zone. For every Carrie, there were several half a dozen Maximum Overdrive’s.

After The Shawshank Redemption was released, something changed. Clearly there was money to be made, as long as the adaptation was sensitive enough and not a hack job designed to generate quick bucks. Horror has long been a derided genre, looked down upon by its fantasy and science fiction cousins. But at long last, it seemed that the quality stories from King’s canon were being looked upon favourably.

Apt Pupil is a novella charts Todd’s descent in obsession and madness with pulpy brilliance. The story is suffused with the 1970s idea of America gone to seed, that the most brilliant of us can become the most monstrous. The American Dream is in fact a nightmare, where an escaped Nazi can live openly, if quietly, American suburbia. Todd Bowden, is a young, bright, clean cut teenage boy who develops an unhealthy interest in the Third Reich. Keen-eyed, he recognises Dussander on the bus, and after some thought, follows him home one afternoon. At the price of Todd revealing his identity to the world, Dussander is forced to recount his terrible war crimes as a concentration camp commandant. Todd is at first fascinated, then disturbed, then warped by the tales he hears. His schoolwork suffers, he becomes impotent, and he lies and lies to his doting parents. Todd’s blackmail of Dussander is returned in kind, and the two develop a dark, parasitic relationship where neither trusts the other enough to extricate themselves from. The ending is one of King’s most horrific and is omitted from the movie.

Singer, on the other hand, adopts a slightly lighter touch for his movie adaptation. The dark tone of the novella is replaced with a brightly coloured, gaily lit slice of 80s American suburbia. Brad Renfro’s Todd Bowden is a bright young fellow with an interest in Nazis. The spiral into madness and murder the same character suffers in the novella is absent here, replaced by an overwhelming sense of entitlement that convinces him he can manipulate an arch manipulator. Of course, that doesn’t work out quite as he hopes.

Apt Pupil is a much lighter experience than the novella. Necessarily, it has truncated a 200 page story into a 100 minute movie. Some of the digressions in the novella are eliminated, and the setting is moved up a decade and shortened to a year’s duration. It is nowhere near as dark as the novella, though there are several scenes where Dussander’s Nazi past comes back to life via Todd’s stress induced waking nightmares. The body count is far, far lower, though the one scene of murder is pretty harrowing.

Coming off The Usual Suspects, Apt Pupil does miss the psychological depths and thrills of that earlier movie. Still, Singer does a decent job of adapting the material, making it more acceptable to a mainstream audience. McKellan is brilliant in the role as the duplicitous Dussander, a monster who has faded into the background, without purpose until Todd rings his doorbell. It is Todd’s blackmail that brings Dussander back to life, and the most chilling scene in the movie is Dussander wearing an SS uniform Todd forces on him. The quick editing, the marching, the arm raised in the Nazi salute show Dussander at his most monstrous.

Overall, this is a perfectly decent movie eclipsed by an even darker depiction of life under the Nazi yoke – Schindler’s List. As a thriller, it’s not quite as thrilling as it could be, but nonetheless, anchored by fine performances from Renfro and McKellan, Apt Pupil is an entertaining slice of warped Americana.