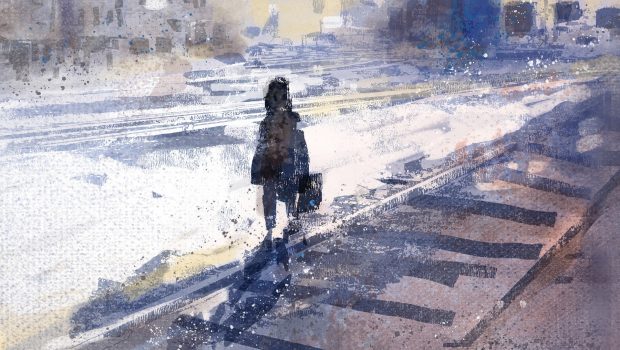 A CHAT WITH STEPHAN FRANCK

Director and Animator Stephan Franck (Iron Giant, Despicable Me), returns to Kickstarter to fund his third volume of his hit series, SILVER a visually stunning pulp-inspired heist story involving vampires. Franck was kind enough to take the time to talk to us more about SILVER, his exciting new project ROSALYND, his personal influences and long love affair with comics.

I’m a huge fan of SILVER, but for those who aren’t familiar with the series, can you tell us a little bit about the story, and some of the defining characters?

First, thank you so much! SILVER takes place in a universe based on Bram Stoker’s DRACULA. We begin 40 years after the events of the novel, in the noir Pulp era of the 1930’s, where we meet James Finnigan, notorious conman and gentleman thief–a deliciously amoral character who gets by on charm and wit. Unfortunately, Finn’s luck runs out as the FBI is getting close. Running low on cash and out of places to fall, Finn and his accomplices need one final big score before they can ride off into the sunset. Thankfully—or maybe fatefully—Finn comes into possession of a secret: the existence of a fabulous treasure, which just might happen to be hidden in a castle full of vampires. To pull this off, Finn knows that he will need help from someone more familiar with the undead, and he tracks down a woman named Sledge—AKA Rosalynd Van Helsing, last remaining granddaughter of the Van Helsing you know. Rosalynd continues in the family tradition, and carries around a mysterious and haunted past. Sparks fly immediately between her and Finn, but she agrees to help him and his crew in their endeavors, for reasons entirely her own. Lastly, Tao Leu, a 10 year-old boy with the unnerving gift of second-sight invites himself to the job. Soon, they all embark on a journey across the world, in search of Dracula’s castle and its mythical treasure. What could go wrong?!

SILVER has often been described as sharing a similar vibe with the Mignolaverse. Was this a deliberate angle that you decided to take, or was it just coincidental?

I take that as a huge compliment, as I am a big Mignola fan. I’ve always been attracted to storytellers who combine great draftsmanship with a sense of graphic abstraction. And of course, there is a common type of subject matter and a certain sense of whimsy that we may have in common. In my case, the inspiration for Silver really came from a certain type of noir cinema of the 1930’s, ranging from Fritz Lang masterpieces to serials, and in my imagination, ended up coalescing into one meta Pulp universe of the 1930’s where gangster stories and supernatural tales coexisted in black and white harmony. A world of suspense, mystery, and fun. I’m trying to revisit those early fascinations with a sense of sophistication and an honesty with the characters that has a modern sensibility.

Did you encounter any challenges when trying to form a fresh and unique narrative like this?

I think that when you’re running wild with a highly fantastical story, the challenge is always to stay true to the characters and to the world that is created. Keeping the self-consistency and internal logic as solid as possible as to not break the spell. That’s what I’ve been trying to do with SILVER, and now with ROSALYND—you see a universe starting to take shape, and that’s super exciting.

You both write and illustrate SILVER. Do you find that you enjoy one over the other, or is it hard to separate and compare the two?

I love doing both. Story is of course everything, but comics is a visual medium, and as a reader, the art needs to speak to me before I can engage with the story. My process starts with a script that I write in screenplay form, because that is the format that I’m familiar with. That means that the story is not “directed from the page”. The script is really only about what happens, and it’s the drawing phase that is about how the story is told. I like to memorize the script enough so that I don’t have to look at it as I draw, and I can just be immersed in the visual flow of the beats. Then, when I add the dialog to the page, I sometimes find that a specific point was already communicated by the visual and doesn’t need dialog, or find that there is a gap in the storytelling that needs to be bridged with words. Will Eisner—who’s my idol—used to say that the writer and artist must work as closely as possible—if possible sharing the same body. It can’t always be the case, but I’m really enjoying it on SILVER and ROSALYND. 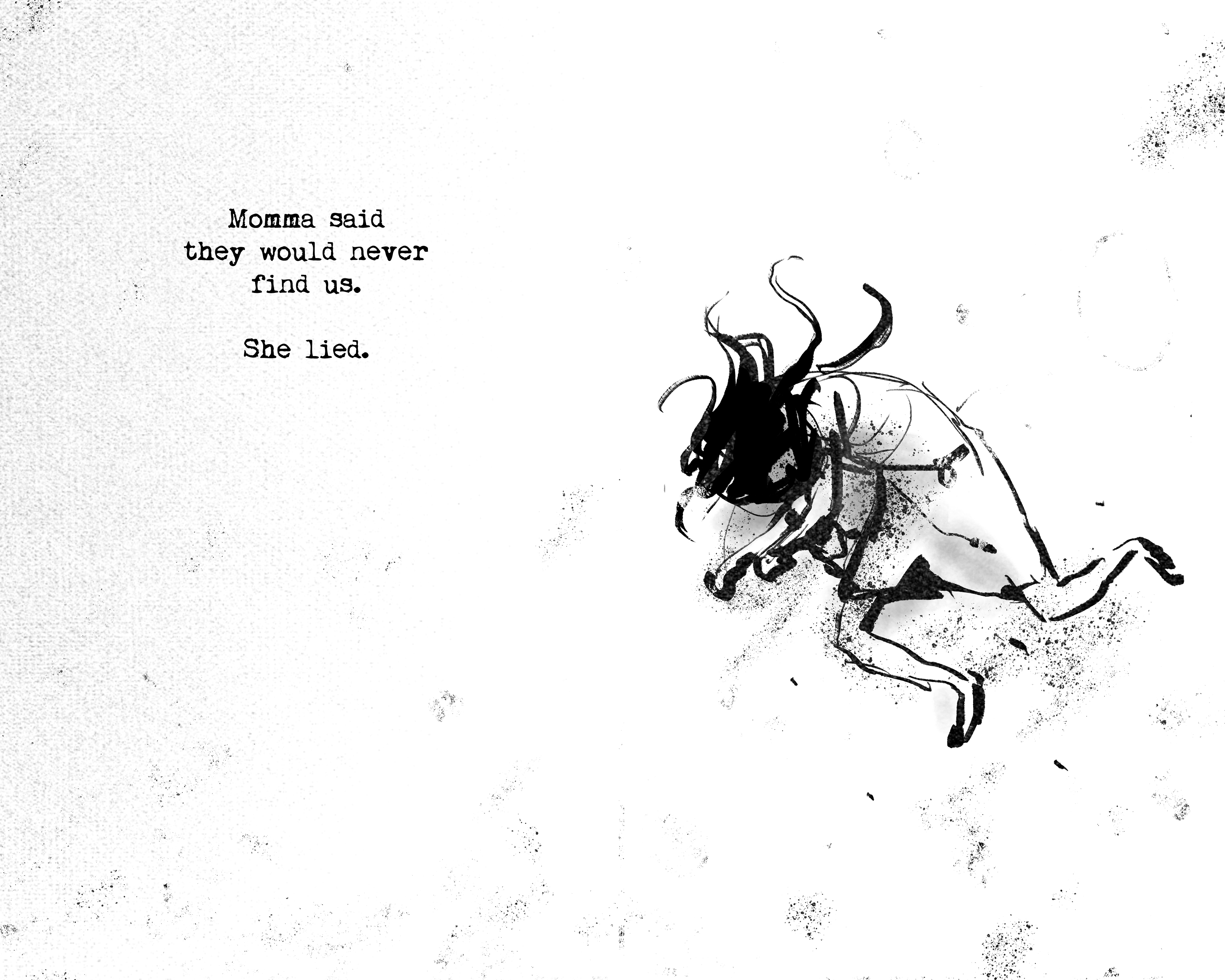 Can you reveal to fans some details to what they can expect from the newest story arc?

Well the first 2 volumes of SILVER were about discovering the world and the characters, and setting Finn and Sledge’s long con in motion. In volume 3, all hell breaks loose! We have crazy action sequences, agendas and secrets revealed, characters pushed to their breaking points, and on the vampire side,  the series’ most gothic moments yet. It contains some of the moments that I have been dying to see realized in pictures ever since I first wrote them. It was a blast to do. Then, we have ROSALYND, which is a companion to the series, and explores Rosalynd’s secret past. It is told through her point of view and voice as a child. It is very haunting an intimate, and yet Pulp to the max!

Many people will know you for your work on films like Iron Giant and Despicable Me, so what was it that made you decide to take the plunge into comics?

Comics have always been a part of my life, and although animation is the type of life-project that easily becomes all-encompassing, I always knew I would revisit comics someday. Not only is it a form that I am in love with, but it can also give the creator complete creative autonomy. Your only limitation is your imagination and your drawing and storytelling skills. Budget doesn’t factor in. In a way, it reconnected me with the self-startedness that you have as a child, when you pick up a pencil or starts to type a story up. The impulse was incredibly pure.

Did you grow up reading comics as a kid?

Yes. My parents were retailers, so I was incredibly lucky to have access to just about everything. And since that was in France, we had both the European BD and the American comics. It was pretty much a steady diet. The fun thing, too, is that when I was a kid in the late 70’s, is when the floodgates of American comics opened up in France. Before that, censorship kept them out, so when they came, they all came at one. You had adventure strips of the 30’s, golden age, silver age, and current bronze age books all on the racks at the same time. The whole history of comics was right there at my fingertips.

Are there any comic industry legends that have inspired or influenced you?

The creators that most influenced me on the comic side were Jack Kirby, with his insane mythology, and Gene Colan, with his sense of mystery and danger. I’m trying to pay homage to both of them in SILVER. Then there is Will Eisner who is of course in a class of his own, and he might be my biggest influence altogether. In fact, I spent a few year making an animated short film of the Spirit when I was a teenager. I also loved Steranko, not only for his Pop Art influence—which I also try to connect to—but also for his use of heavy blacks. His adaptation of the movie Outland is my favorite movie-to-comic adaptation ever. Then, when I was starting college, people like Frank Miller and Alan Moore came on the scene, and brought a level of authorship to the medium that I found very inspiring.

Finally, you recently launched the latest Kickstarter for the third volume, but you are taking a new angle with this one. Can you tell us a little bit about that?

This time, we did something a little unusual, which is that we attached 2 books to the kickstarter—SILVER Volume 3 and ROSALYND. That really came from what happened behind the scenes, and how these books came about. Volume 3, of course, was the scheduled continuation of the Silver story. The full arc of Finn, Rosalynd and the gang stealing the Silver Dragon unfolds in 4 volumes. As I mentioned earlier, I had been dying to get to vol. 3, as it is chock-full of super fun set pieces, and really intense moments. One of those moments is a big disclosure about Rosalynd’s mysterious past. And because that disclosure happens in a dreamlike flashback, I did it in a completely different style from the rest of the book—much more stream of consciousness, and almost abstract. Then the sequence ended, Rosalynd’s secret was out, and I continued on with the rest of the story. In that sequence, however, I had been introduced to Rosalynd as a child, and she was such a compelling voice that I needed to hear the rest of her story! So there I was, on a trip out of town, alone in my hotel room, up against a deadline on Vol. 3, and Rosalynd just came out. And as that story literally poured out, it took on a whole different level of truth…Rosalynd became a strange metafiction about my family history. I began to look at the Van Helsings as a family of vampire hunters who wanted out of the life, and who would travel around, try to settle somewhere, plant roots for a while, only to see “the life” eventually catch up to them. That made me think of my great grandparents and grandparents–wandering jews who made their way across Europe to escape persecutions in the first half of the 20th century, living as perpetual strangers, always on thin ice. My grandfather, himself named Abram, and himself a bad-ass and war hero who escaped from Auschwitz twice (an an unlicensed dentist who, prompted about his profession would demure “consider me a practitioner of the dental arts”), became Abram Van Helsing. My mom, a child who had to survive the war through her own devices, and who had to process horrible events though her young eyes, became Rosalynd. The deeper I went, the more personal everything turned out to be—including a lot of the magical bond of sisterhood  between Rosalynd and Bernice being inspired by my own daughters. And so there it was. When it was all said and done I had two books instead of one. I knew a lot more about the story of Rosalynd “Sledge” Van Helsing, and it carried more truth than I ever had thought possible.

If you wish to help support Stephan Franck, go here to the Kickstarter campaign. If funded through Kickstarter, pledges will be delivered to backers this September.